Snorkel until you can feel the burn. 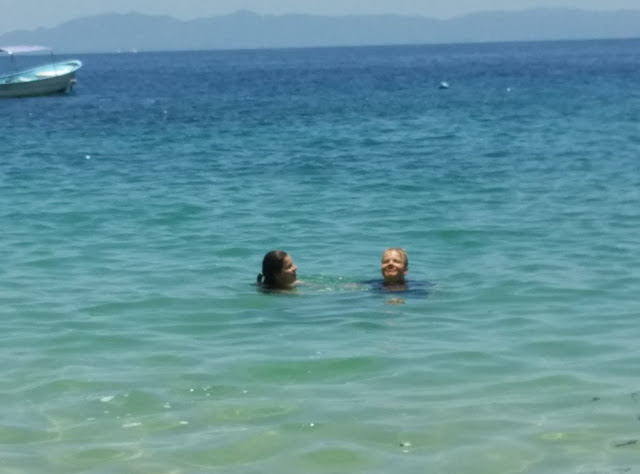 Jeff had a little less stressful day yesterday, and was able to come down to the beach and snorkel with us for a good couple of hours. We went over to our little special side to snorkel, and Kai was a bit nervous about meeting a jellyfish again. This is where he was stung. I told him the odds were in his favor, and that it would be fine. He put on his mask and snorkel, his fins, and got started, then immediately thrashed around and headed for shore. He swears he saw a pinkish moon jelly, and told me where he saw it. I couldn't convince him to get back over there. So sad, he just stayed in the shallows for the rest of the time. 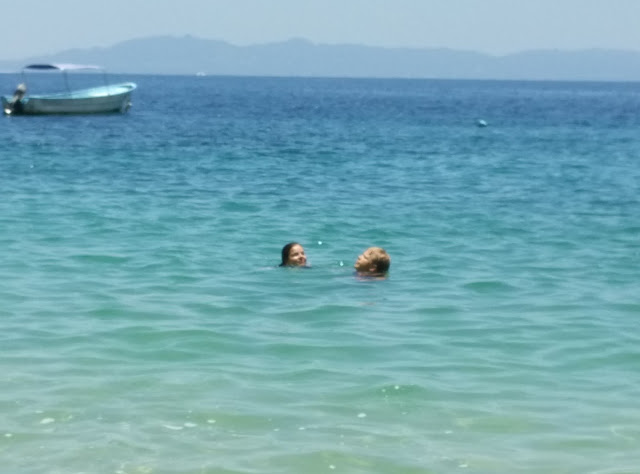 Ari on the other hand, was really brave, and not only went out with me, but agreed to let Jeff take her to his fish canyon, where he had seen big schools of fishys. It is further out, a little deeper, and there isn't as much coral, but it is really cool in its own way. 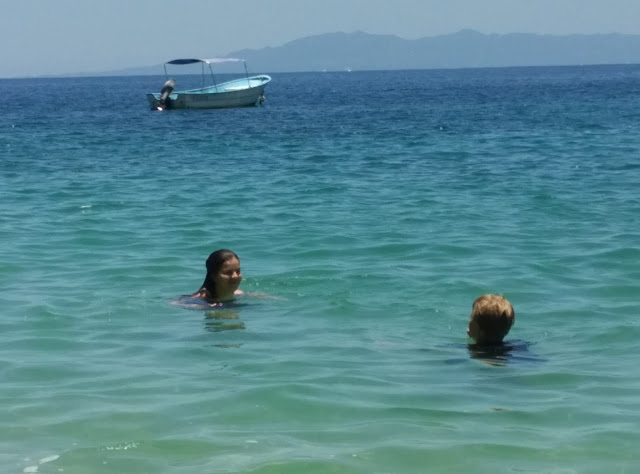 Once Jeff left, I hung out on the shore reading, my face hurt from too much mask time --and I tend to clench my teeth around the snorkel which gets tiring. The kids played and splashed in the bay. This area is so protected from waves ! That's what makes for some fun snorkeling--it stays really clear. 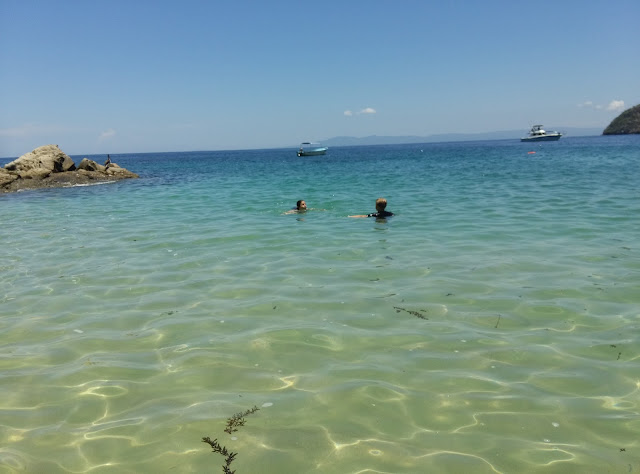 The bad news was that we had pretty much run out of the sunscreen in my bag, and we were all getting crispy without knowing it. I had sprayed us all down, but it must have been dregs. 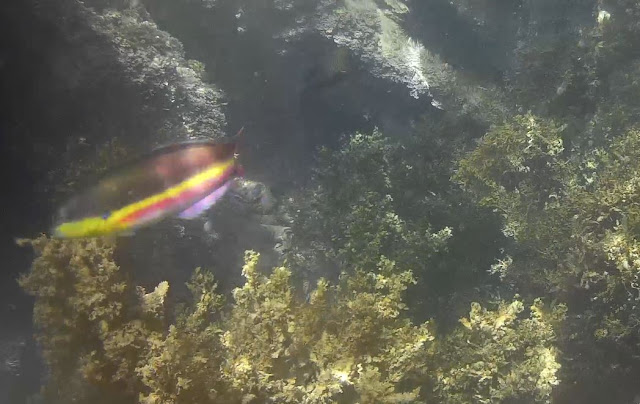 The good news was that we finally remembered to bring bits of cheese to feed the fish with.Some weren't interested, but these rainbowy wrasses loved it. 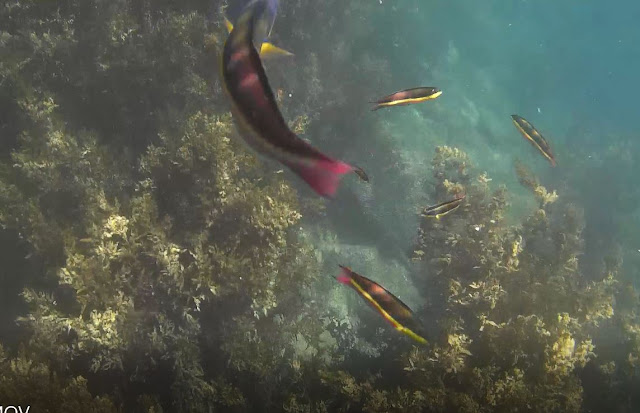 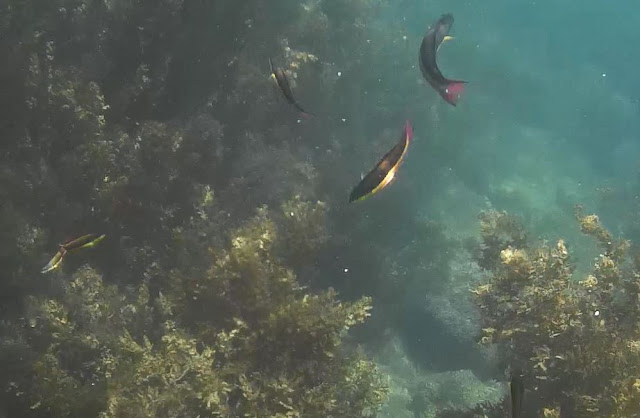 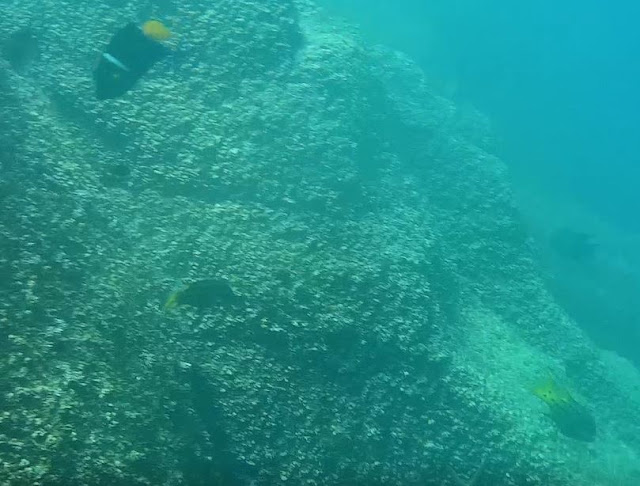 This is in Jeff's canyon. All of these images I had to snip from video from our crappy knockoff gopro, which started leaking (of course) an hour or so into the trip. This was also pretty deep --Jeff tried to dive down nearby, but it is deep so the light isn't as good. 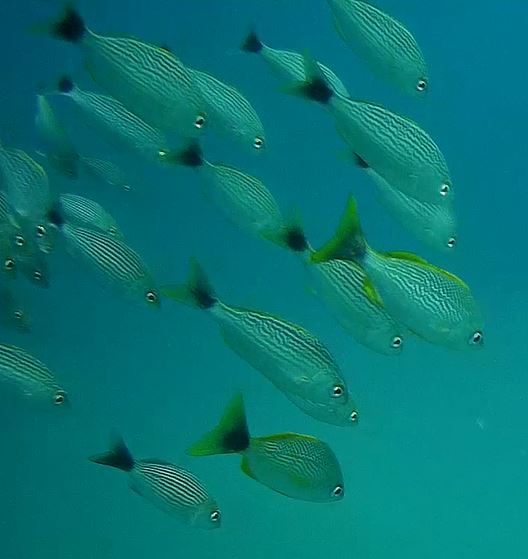 But at least you can see a little sampling of what we are seeing. I wish he had gotten a shot of my friend the huge black and white puffer fish. Maybe next time. I will try to load one of our videos at the end, hopefully it works!

We walked home later, every step painful with sunburned thighs and backs. Oh my goodness --I don't remember making a sun mistake this bad for years!
Tweet
Posted by Amara at 10:00 AM

Someone was just telling me the fish were going crazy for papaya! Who was that? Might try it!

Or our snorkel guide did chips, remember?

Reminds me of good times at La Jolla Cove. So glad you could do this.