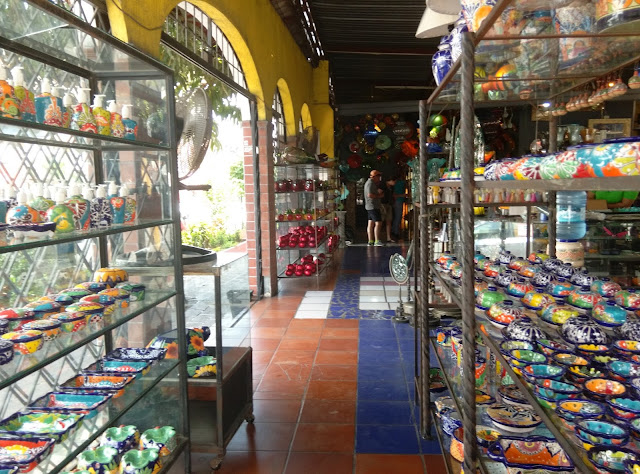 Yesterday we decided to go to downtown Puerto Vallarta to see the sights. I spent an hour or so in the morning trying to figure out what I most wanted to see, and writing down addresses for the gps. First on my list was the farmer's market, but we headed over there, and nobody was there. Maybe it is just for tourist season? This is the off season, so a lot of things are closed I guess. 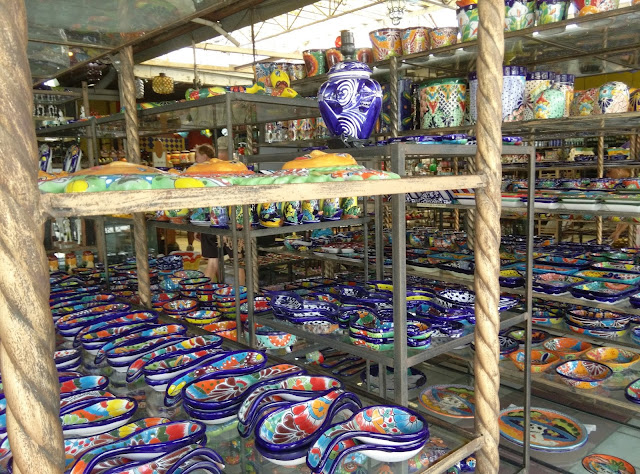 The next thing was this glass gallery, and it was worth seeing. The place was huge. I let Ari use my phone, and she took probably 20 pictures. She is still mad that I deleted over half of them. The store has pieces in clear glass, ceramic, and stone, then walks through to another related shop that does all pewter dishes. Audrey you would love the pewter place. 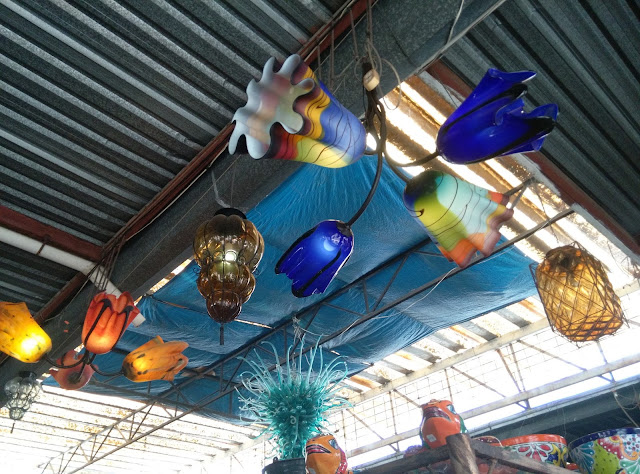 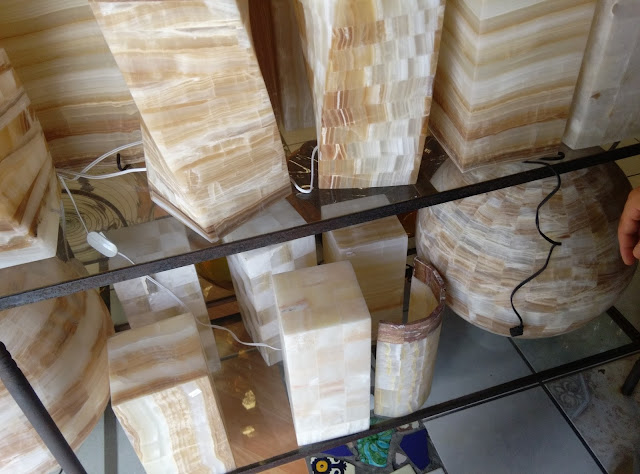 These are some of the stone pieces. The entryway in our building has these light fixtures and they are lovely when lit up. 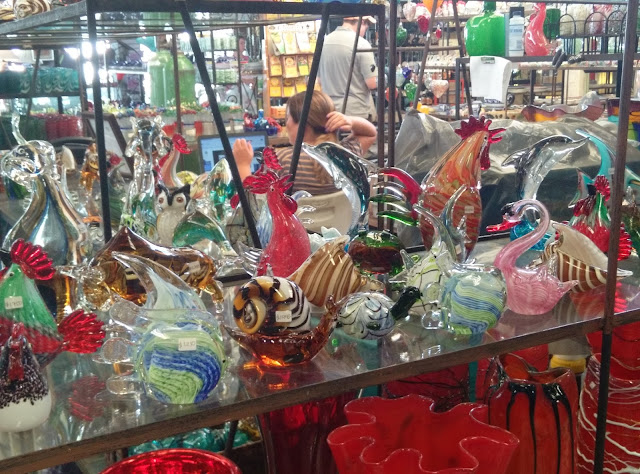 My favorites were the quirky animal figurines. Well, maybe those and the hand painted tiles. I would love those tiles in my house. Wait--I bet I have a picture of those... 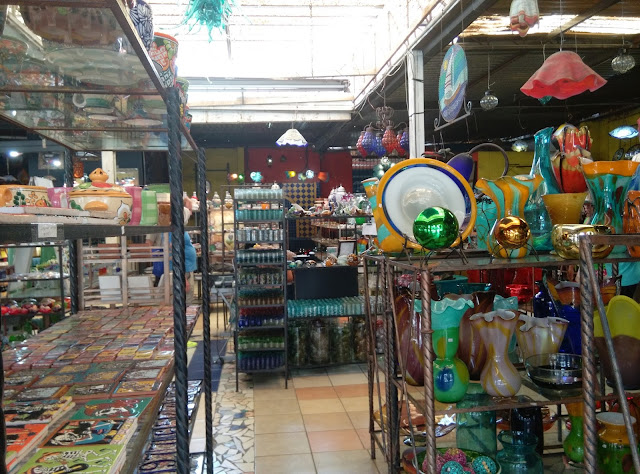 See those to the left? They also had some large and more elaborate ones. OK, moving on. 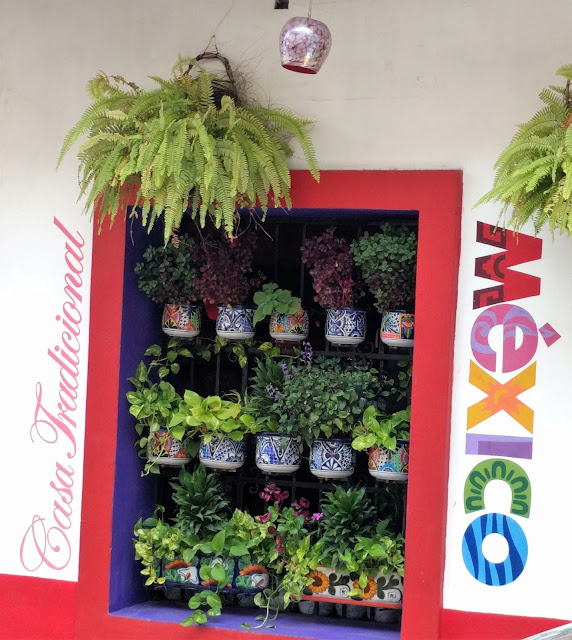 Just a couple of blocks away we saw this restaurant using the ceramics from the glass gallery in a beautiful way. Everything in the gallery was pretty overpriced in my opinion --this window display cost around 1,000 dollars if they paid retail, but I wish I could do something like this. I love color --especially blue and white. 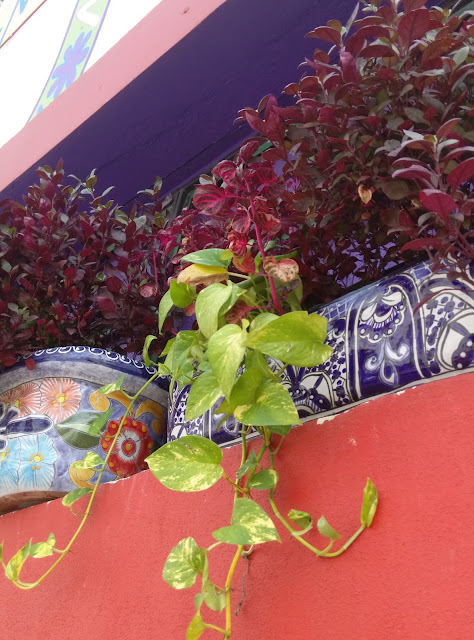 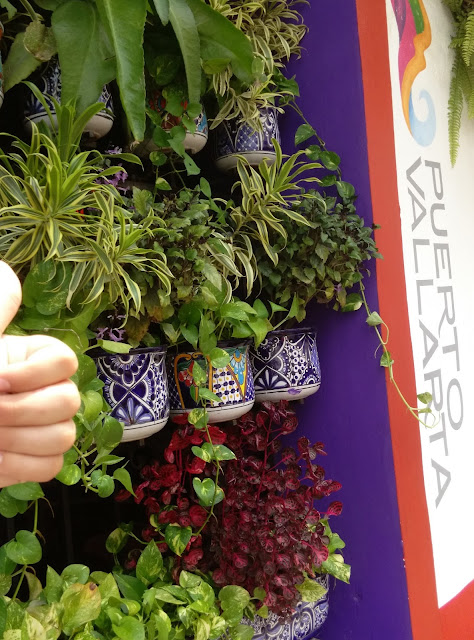 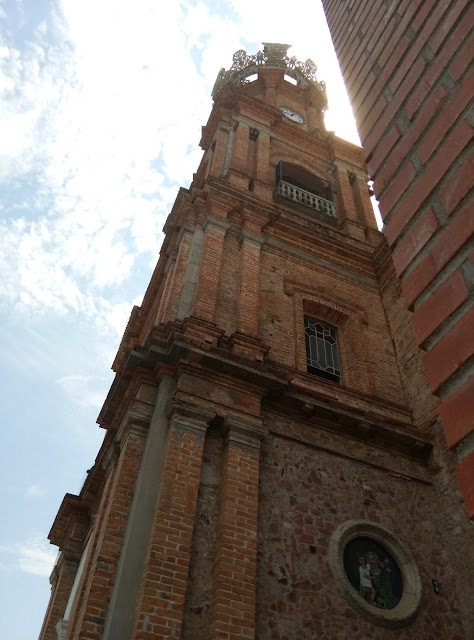 We kept walking, and finally ran into the cathedral. Except, I think this may be just a parish church. I tend to call all catholic churches cathedrals in my ignorance. It was hard to get a good perspective on it close up. Once we got up the steps we noticed that a service was being performed inside, and I felt skeevy about walking in on it. 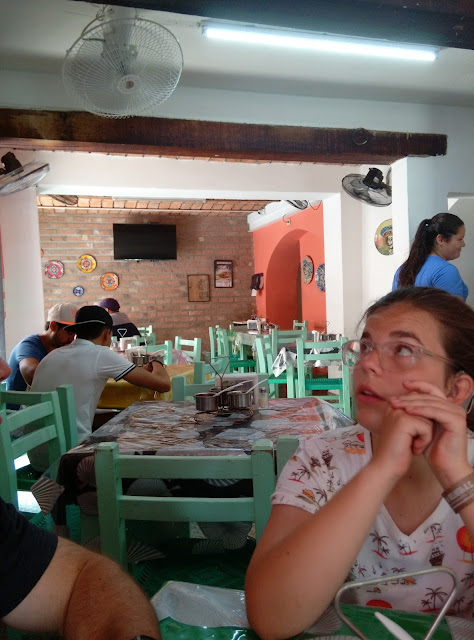 So we got some lunch instead while we were waiting. We all liked what we got. I got something called a "sope" which I had never had before. Kind of like a really thick corn tortilla, made into the shape of a shallow bowl or nest. It was filled with whatever you chose, so I got three with different fillings (they were small). Here is a recipe page you can click to see what they look like.
We had an unexpected perk in this restaurant. There was an older guy at the next table who asked us where we were from. He was originally from Minnesota, but said that now he was mostly "from here". I guess he has been living all winter (6 months or so) and a month or so in summer down here in Puerto Vallarta, and had been coming down here for 30 years or more. Kind of a fun story from him: he and his buddies all loved to fish, so they bought a boat together, and gave it to a Mexican friend of theirs. Now the friend has a boat to run as a business, and they can go fishing with their captain friend whenever they want. Our guy was really happy this day because his Mexican friend got an unexpected visit from his daughter and her children. He hadn't seen her in years, and was so happy. They had been estranged since everything went south for this guy in 2006. He had been working in the states and lost everything with the crash, and his wife left him. So here he got some of his family back. Me and my new Minnesotan friend agreed that sometimes, when something good happens for your friend, it makes you as happy as if it happened to you.
He gave us some great tips on restaurants and boat excursions, and was really kind to us. It was better than watching a movie with our lunch. 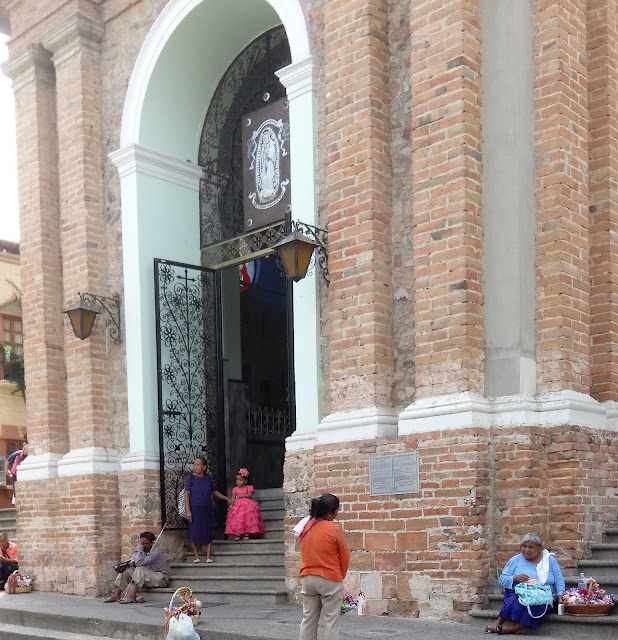 We noticed people exiting the church across the street, so went back to try to look inside. 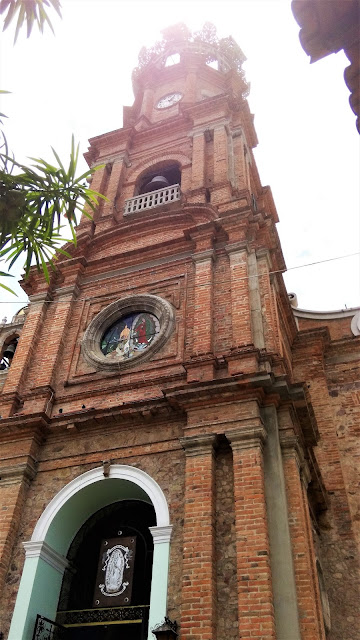 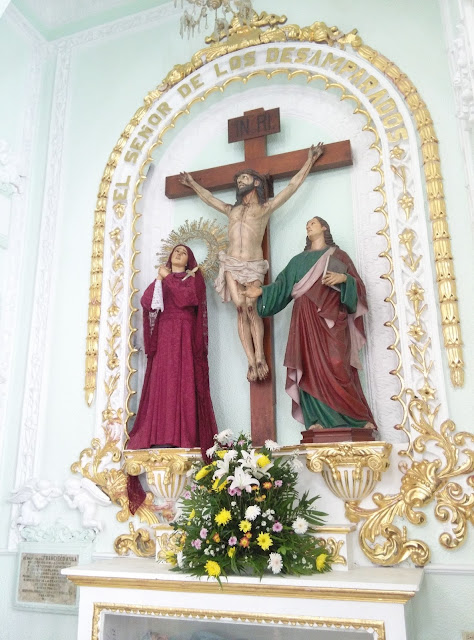 I didn't love the kind of gruesome crucifixion image, but the rest of the church was just beautiful. 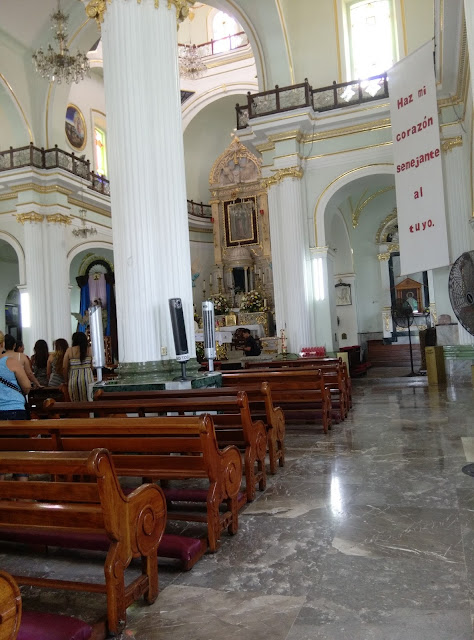 The Catholics make their churches as beautiful as we make our temples. I always love to see inside. 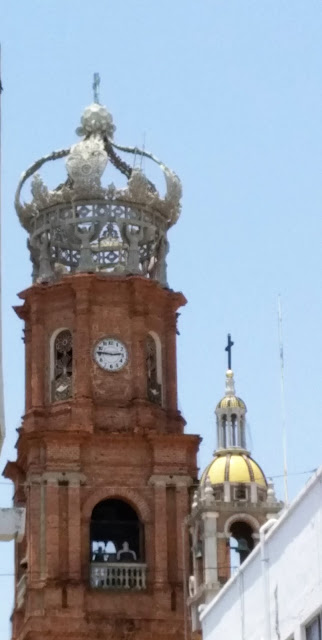 I did get one good shot of the Guadalupe angel crown once I got some distance.
We even got to hear them ring the bells. 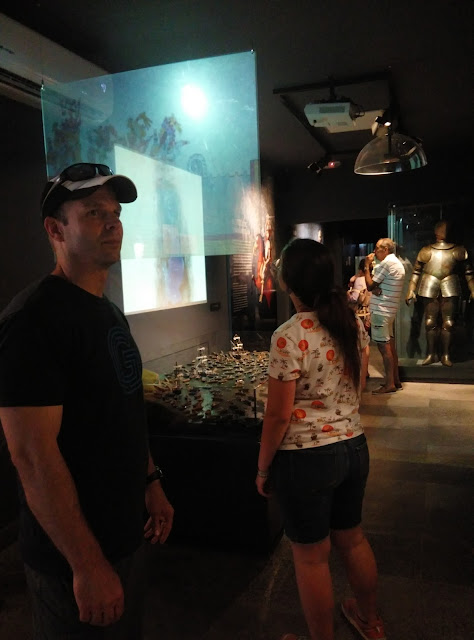 Next we headed over to the Naval museum --following the recommendation of our new friend. It was worth seeing. I honestly would have paid the admission price just to get air conditioning it was so hot at this point, but it was worth it in its own right. This whole museum was about how the Mexican navy originated, and was a testament to Mexican pride. It got a little uncomfortable seeing the displays about US aggression in Mexico. First we took away Texas, California, New Mexico, Arizona, Utah and Colorado; then around the beginning of WWI we were back at it, invading in Veracruz, messing around in there for almost ten years. I was a little embarrassed.

They had models, and projectors, and even a life-sized battleship simulator that Kai thought was really cool. I recommend this museum for families. 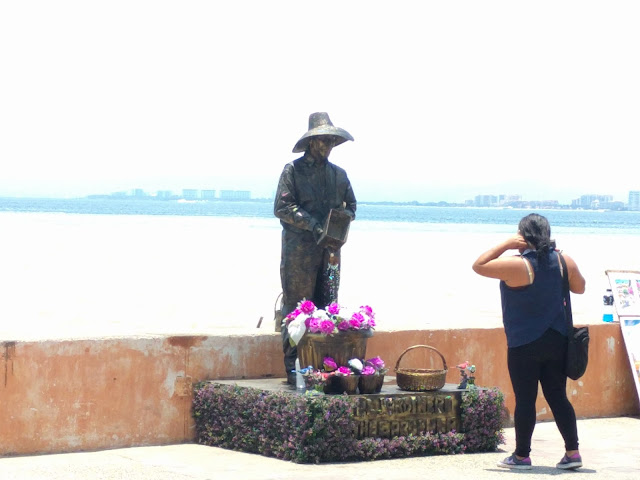 We headed over to the Malecon (or boardwalk along the shore), just to see the shops and things. While we were looking in a shop, Jeff came up to me and said under his breath, "go look at the bench outside --the first guy on the bench is a statue, but look at the second guy". There was a man dressed up as a statue in soldier's clothing to match the real statue next to him. Then we saw a Peter Pan "statue" balanced on half a foot apparently with wings and a sword. I still can't figure out how he was really supported. Maybe a brace running up his side? I wish I had taken a picture of him.
This guy had a watering can and flowers, and Jeff swore the water wasn't real. Ari bet him that it was. 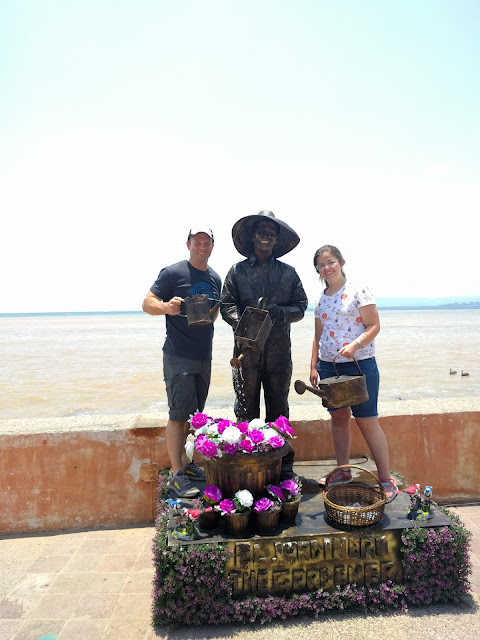 It was real water --he had some sort of pump system running under his clothes recirculating the water. So clever! 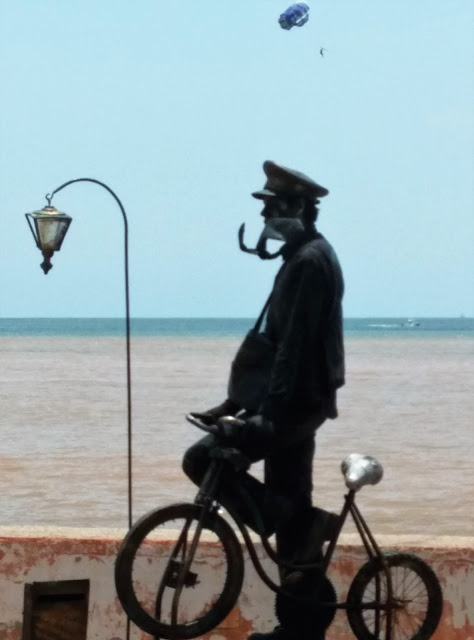 I did get one shot of the mailman guy. These living statues made the walk extra fun for us, but finally we were too hot to think anymore, let alone walk, so we headed back to the car. 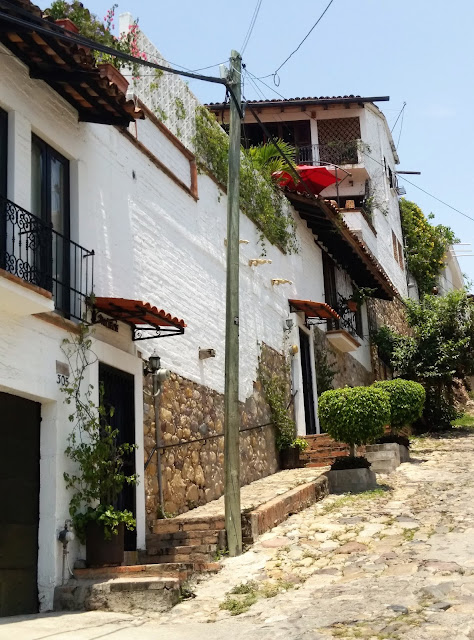 I wanted to show you some examples of the colonial houses in the area. This is right by where Liz Taylor and Richard Burton would secretly meet up when filming their "Night of the Iguana" movie, but I wasn't interested enough to track down the house. I just like to look at the old architecture. 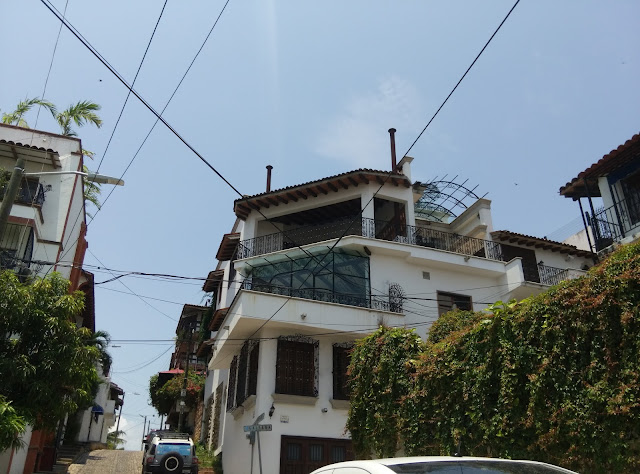 Puerto is so pretty with all of its red tile roofs and white washed brick, and wrought iron. Maybe some day we will come back and stay in town.
Tweet
Posted by Amara at 4:53 PM

I really enjoyed touring the town with you. I think it is time we visited Puerto Vallarta again.