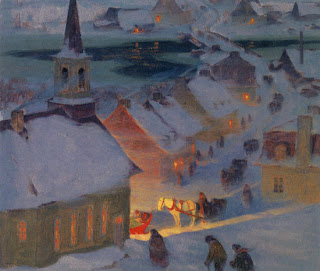 I took a personality test last night and was SURE I'd be the "romantic".  I was really sure.  Nope.  I was the "helper".  What "the helper" sounds like is a person that would do anything for people to love them.  Kinda pathetic? that's what I thought.  Sigh.  Oh well. I've known for a long time that I really like approval from those around me; not that I'd sacrifice my principles (that showed up in the test too).  ANYWAY, back to the romance.  I'm not talking Harlequin here, I'm talking about a way of looking at things --everything --and seeing things with rose-colored glasses.  I'm talking about finding the "romanticism: an exciting and mysterious quality (as of a heroic time or adventure)" in everything.  It's like taking the world, and finding the Disney in it.  That's what I like to do.

So what's my favorite time of year?  Of course. What other time of year do you decorate your whole house and city, and stylize everything from sweaters to Oreos (did you know they have Christmas Oreos)?   What other time of year are you allowed to go all goopy-eyed over movies, and songs, and faith-promoting rumors and people just say you have "the Christmas spir't"?  This is the time of year, when I can make almost three hundred 6" gingerbread snowflakes --covering every inch of my counters and no-one thinks I'm crazy (except Jeff --and frankly, he's probably right). 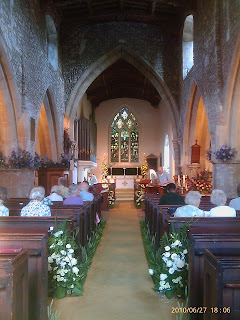 So I wanted to tell you where I always go with my best Christmas fantasies.  England.  When I was little (OK, and again many times as a teenager and young mom) I read a book called "The Children of Greene Knowe" and it is still influencing me now.  There is a scene in the book where the little boy goes to midnight mass with his grandmother in the local church, and travels back in time to the church's glory days when the original family that owned the manor house was alive, and had a boy singing in the choir, the building was decorated with greenery, and there were candles.... can you see it?  The picture above is of the village church near the house the book is based on. It's not midnight, but can you picture it anyway?  I always wish I had big tall stone walls decorated with greenery, and the Vienna Boy's Choir singing the Messiah as part of my personal Christmas decorations. 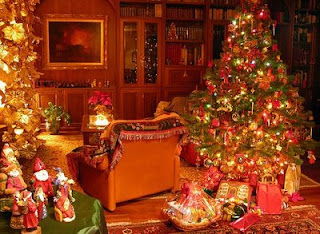 The Messiah has always been a big part of my Christmas fantasies. What a stunning piece of music. Growing up in San Diego, and when I lived in Tooele (I KNOW!), they had a big community production of this piece every year.  I scored a solo of some sort three different years, and even now, thinking about it makes me tear up. There is so much FEELING in that music.  I sang with everything I had in me --everyone does because It's part of the piece and you really can't go halfway.

One year BYU decorated their bookstore with streamers of what looked like sheet music for Christmas decorations, and maybe you wouldn't think it appropriate, but for me it looked exactly right. The carols and songs --especially the Messiah, are a big part of the romance of Christmas for me; especially the English ones --or OK, European ones --I just picture them all in England. I don't get into "rocking around the Christmas tree" so much, but "Deck the Halls", or "Greensleeves", or "The Angel Gabriel's Message" really speak to me.  Sometimes I wonder if it's my ancestry from that part of the world, my roots, calling to me, but I know it's probably just the same thing as always. The romance.
Tweet
Posted by Amara at 8:19 AM 7 comments