Jellyfish sting and a restaurant tour. 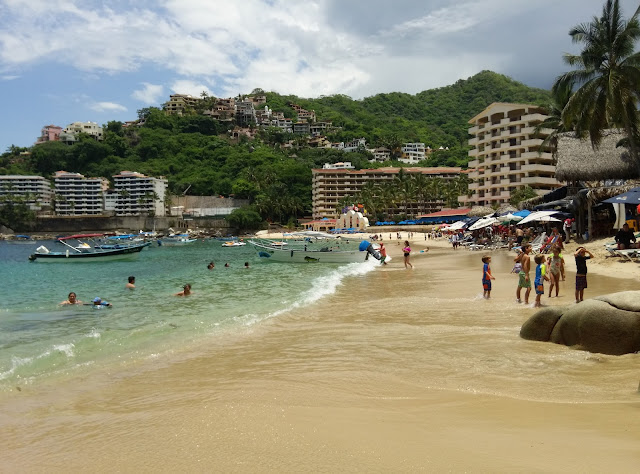 Of course we went back to the beach yesterday. Kai loved it the day before. Ari was cautious, but had a good experience. You can see here, that there isn't a ton of lay on the beach space, the restaurants take up most of the dry sand. We aren't really lay on the beach people anyway. I start getting antsy after five minutes. As a teenager I could sacrifice for the good of my tan, but as a middle aged lady? a tan isn't high on my list of priorities. If I go to the beach I wanna be in the water. 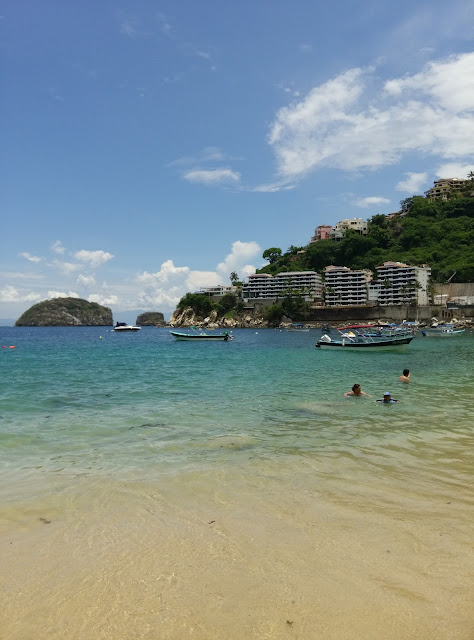 The water was even clearer yesterday. It was lovely. Kai and I saw so many cool fishy guys. I decided that what we thought were blue tangs were probably blue parrotfish. I think these little ones with the same shape, but that have neon blue and nean turquoise dots were probably the juveniles --young parrotfish. I know Garibaldi are like that at least, the juveniles have bright blue markings. 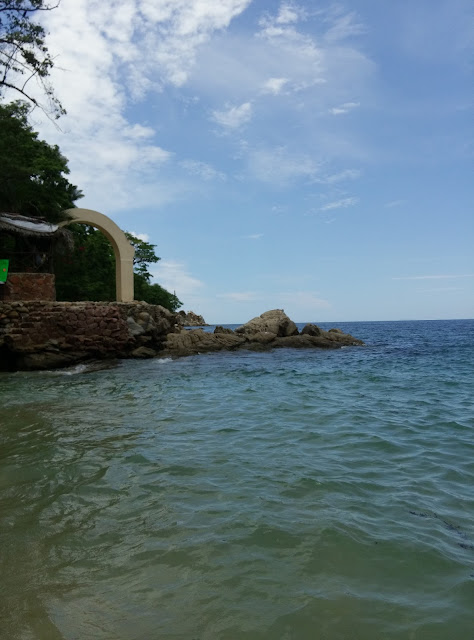 This is the side of the bay where we go exploring.We follow the rocks along the shore and everything lives in there. I was especially fascinated with some sort of scorpionfish I found living in a seaweed forest. Of course Jeff ran down for lunch and took the prize with the coolest find --an octopus. There was a little fish that kept darting in to taunt and the octopus would lunge at him. I wish I had seen that. 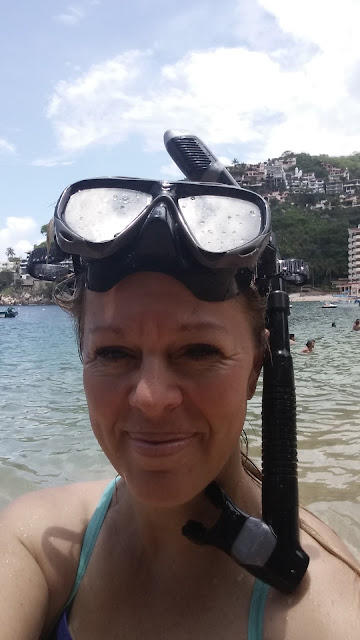 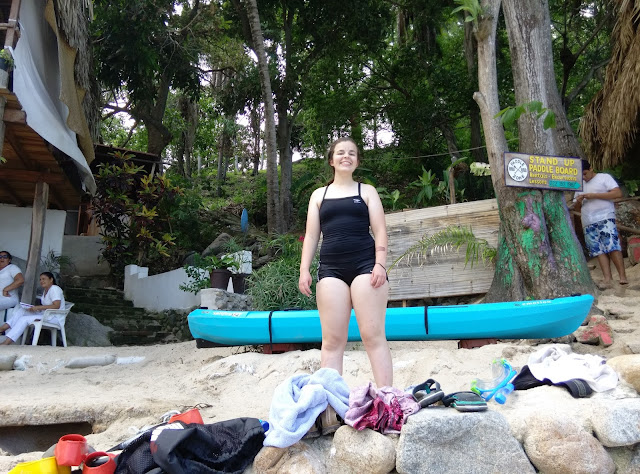 Ari was game forever yesterday, she had a really good time. I was able to pull all of the hair out of the edge of her mask without her getting mad at me, so it wouldn't leak on her. Makes a difference! 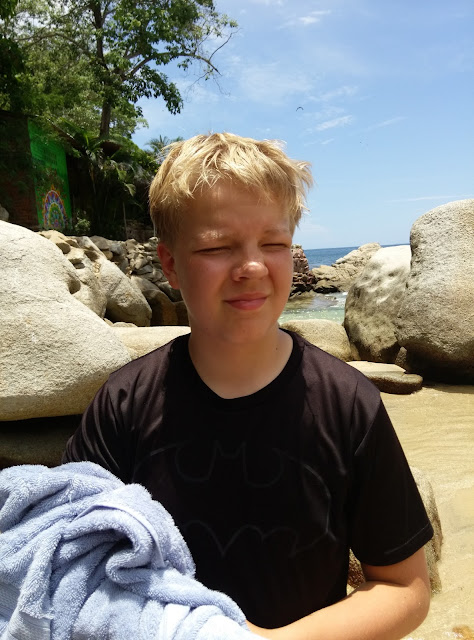 Poor Kai though. We were actually heading back to get Ari --she was reluctant at first again, and some sort of jellyfish got him on the arm.Neither of us saw anything. All I know is that he started thrashing around and yelling, heading for shore as quick as he could go. When we got there, he asked how he would know if it was a deadly jellyfish. I told him he would be in a coma. So that was the sad part. He not only got hurt, but was terrified he might die from it. He wouldn't go back in, and now today he doesn't want to go back. I should have maybe forced him yesterday. 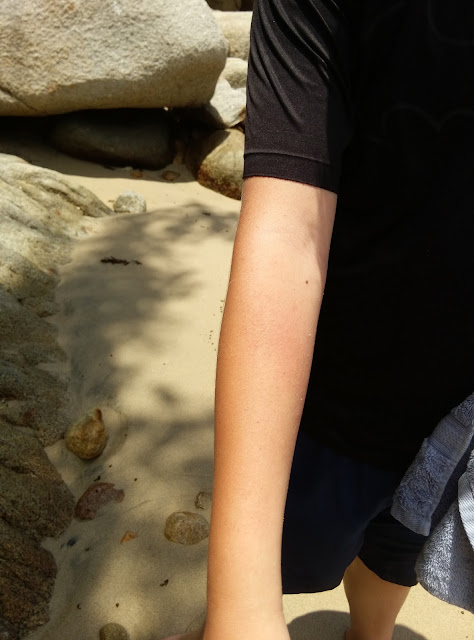 Doesn't look too bad though --can you even tell? 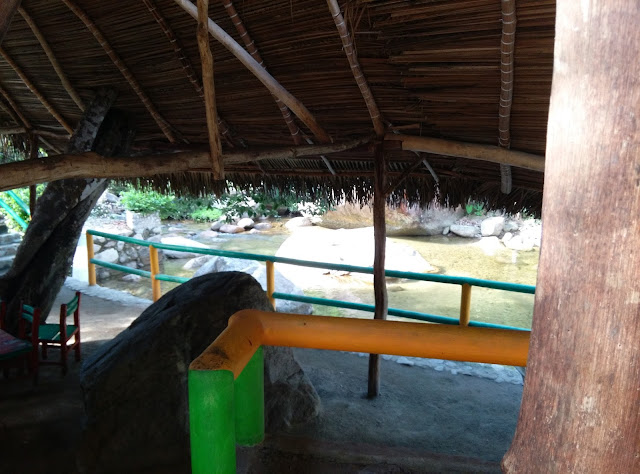 I forgot to say, in the morning the kids let me go a little further with them, and we came to this little restaurant sited on the river. It wasn't open so we looked around a bit. It looks like you can get down and play in the river if you want, or get lunch-- either one. So weird. Jungle, jungle jungle, RESTAURANT then jungle jungle jungle. 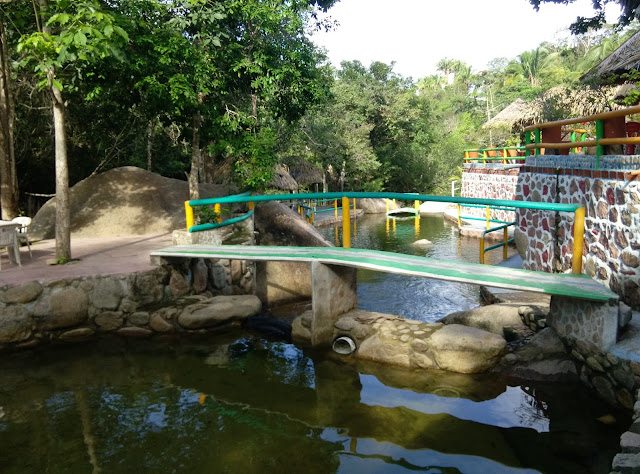 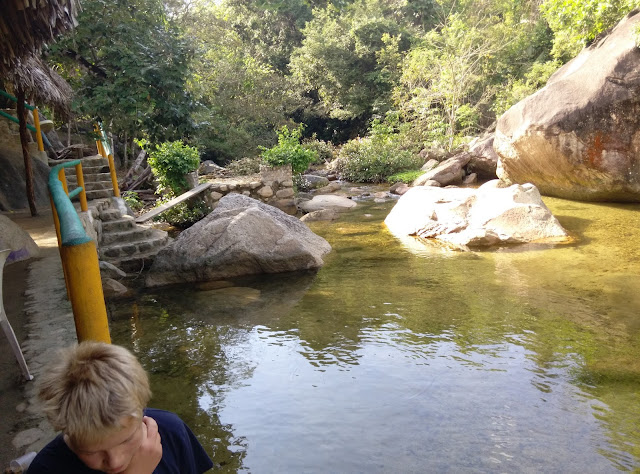 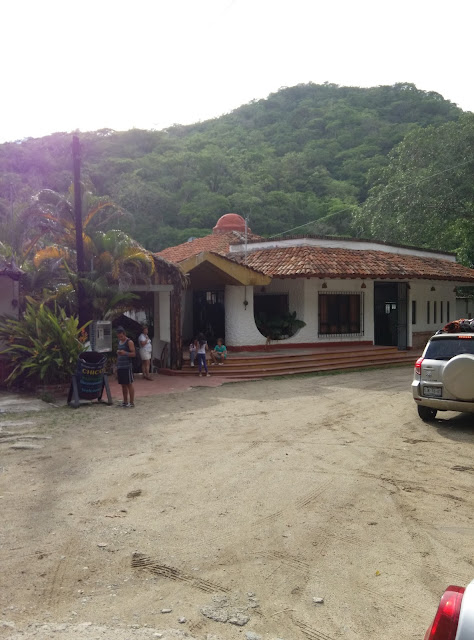 Last night we decided we wanted tacos for dinner, and I decided I didn't want to sweat while making them, so we went out looking for a place to eat. We found this place just south of us, that had just closed when we got there. Wah. But they let us look around. 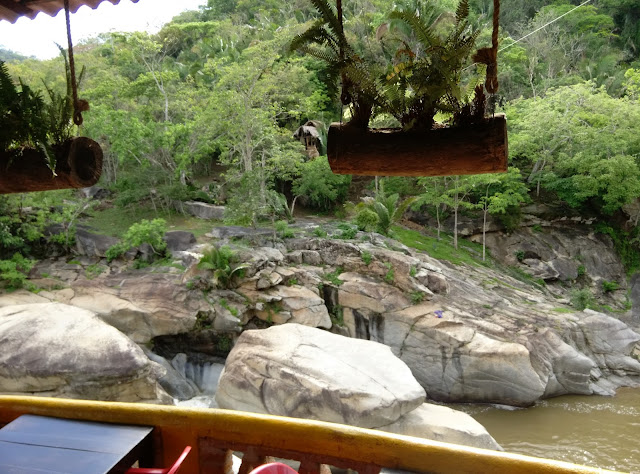 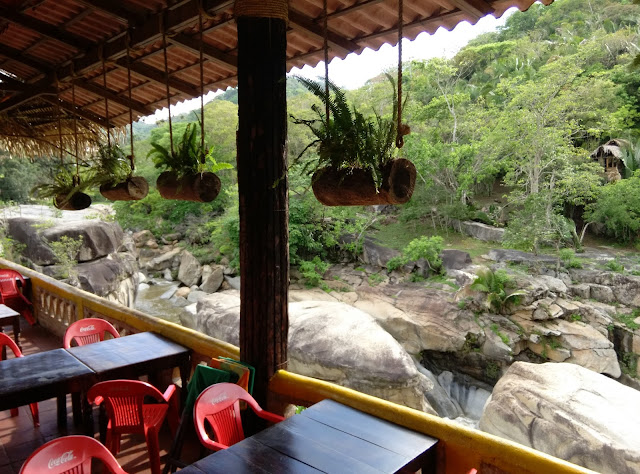 Same kind of idea as the restaurant on the trail. Do we have these in the US? It seems kind of out there as an idea. 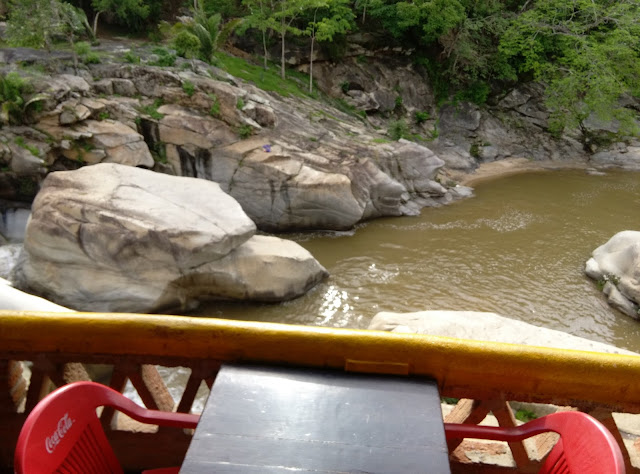 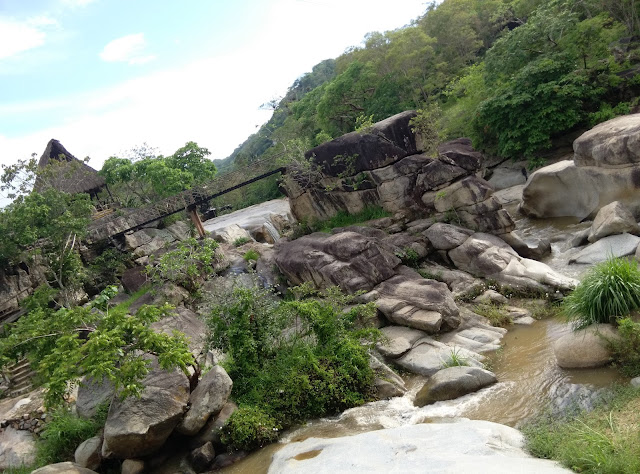 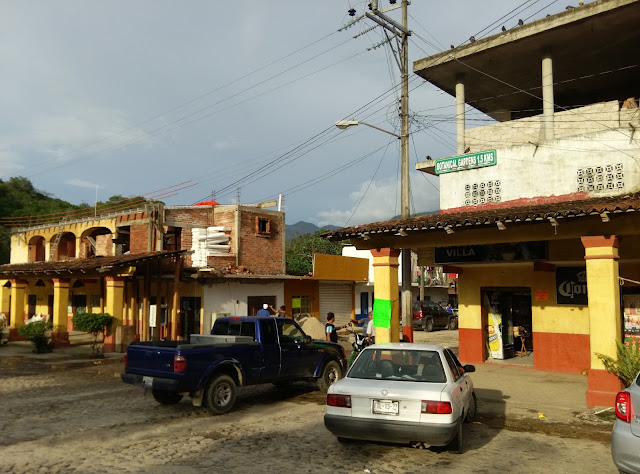 We finally ended up in this little village. There was a sign that said seafood special, and a little lady that seemed to have trouble walking showed us around the corner to where the restaurant actually was. A little grandma type woman met us at the door and kept saying "pasen, pasen" which I didn't understand because we were already inside, but then she indicated the stairs up. She had kind of a covered patio area for us to eat on, with real fabric tablecloths, and lots of green plants. 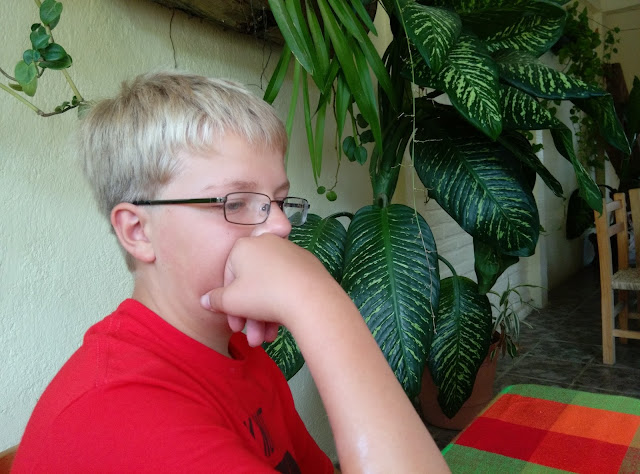 We were a little hungry by then. 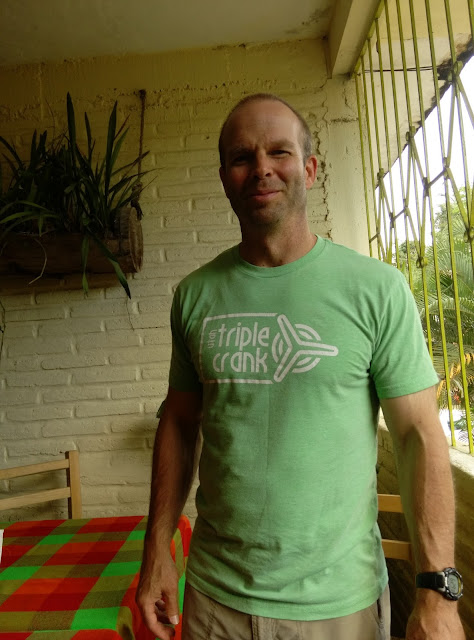 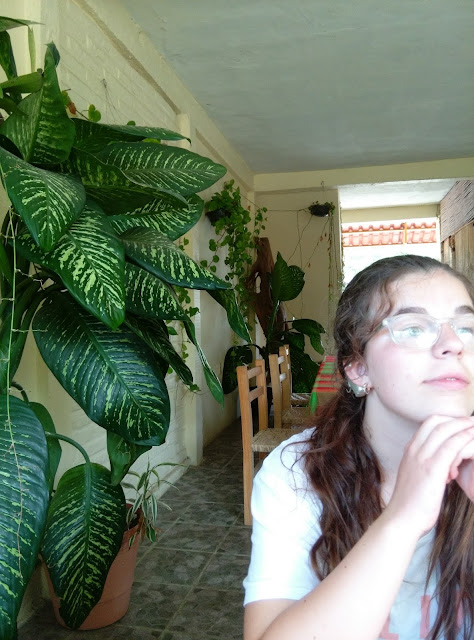 The cook said that that evening they had fish, lobster, and shrimp to prepare, and I ordered two plates of shrimp and one each of the other two. She left to prepare it, and then Jeff discovered he only had a twenty in his wallet. Nuts. We got the two shrimp plates to share which were fabulous. We could have polished off two more easily. 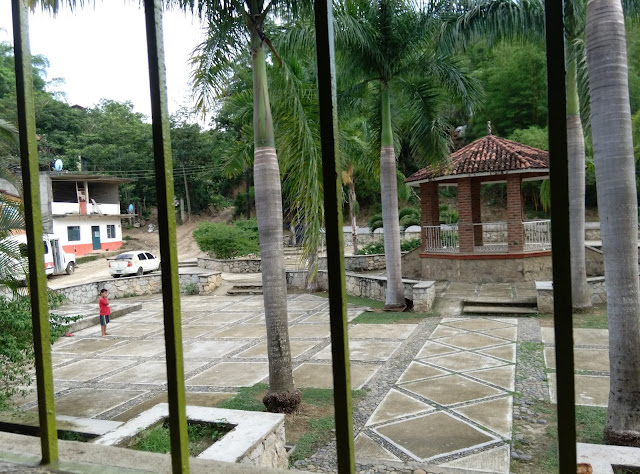 Off to the side of the building was a courtyard place where kids were playing soccer, and then started lighting fireworks. These were super loud ones. We jumped every time. 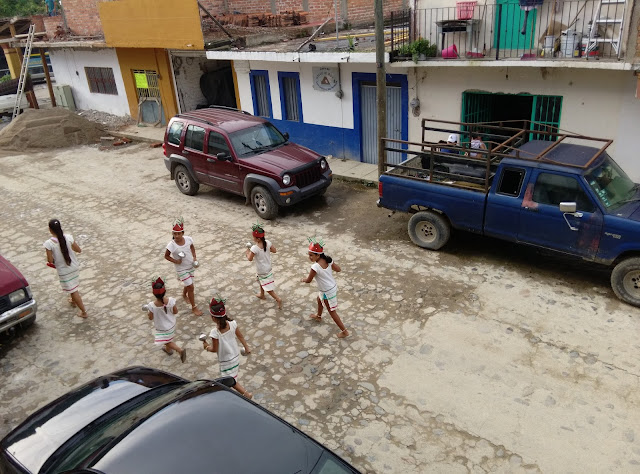 Then in front of the building, we heard some rattles and little drums, and ran over to that side of the patio to see what it was. These little girls were dancing to start a procession. 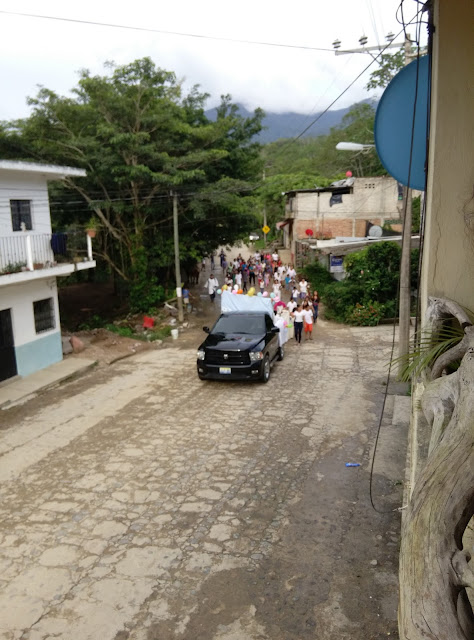 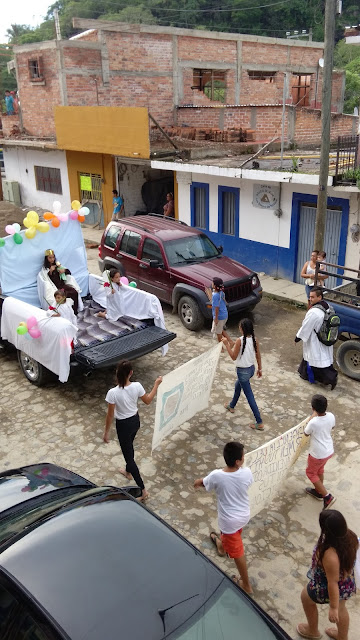 It was some sort of Marian celebration, perhaps Mary of Mt. Carmel, as her feast day is in  July. They were all singing a song to Mary, and it was so catchy, and they repeated it so many times, I started humming along, and it was stuck in my head all evening. 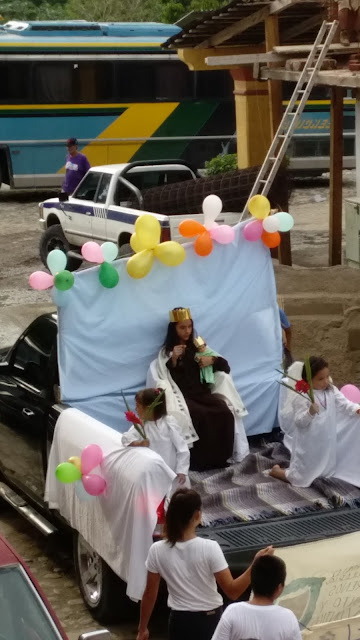 I wonder how this preteen was chosen to represent Mary. I wonder what she was thinking about in her fancy pickup truck conveyance. She was very solemn. The procession was mostly women, and after the whole thing was past, a pickup truck with four goats and two dogs running alongside trundled by.

Hope Kai has recovered and is back in the water. Such fun to read this.

The beach looks nice! I'm glad Kai was okay! i love happening upon cultural celebrations, like the parade.