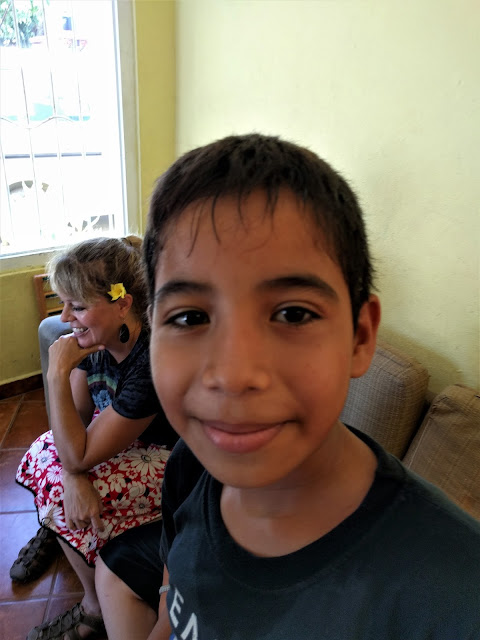 How cool is my husband? After I messed up the bus trip out to the orphanage the other day, he took the day off work yesterday to drive us out there. So cool.

It took us a while, but not half as long as we spent on the bus the other day!
We walked up to the front of the two story white building, to a big metal gate. A dog walked up with us, and when the kids let us in, the dog darted in too. Nobody seemed to care.
We walked through the gate into a breezy partially shaded courtyard, and met some of the kids in a little family room off to the side where they were watching TV. We all trooped out the back door into a little play yard where we played ball and pushed them on the swings for a while until it got too hot even for the kids. It was cooler in the indoor courtyard for some reason. We played freeze tag for a while which was hilarious although I kept getting frozen. 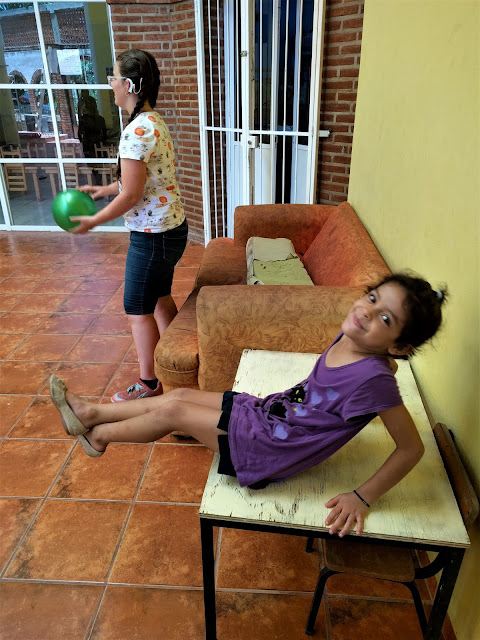 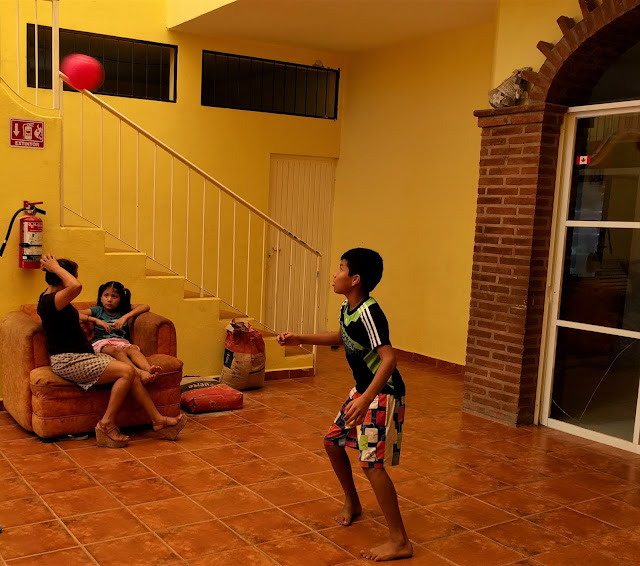 This is the director seated on the couch with the little girl. This little girl kept to herself most of the time -- I mean she was kind of hiding from us --so we gave her some space. Many of these kids have been taken out of abusive homes, or homes where addiction has been a problem. I don't know what she has been through. But almost everyone seemed pretty happy overall. It was fun playing with them. 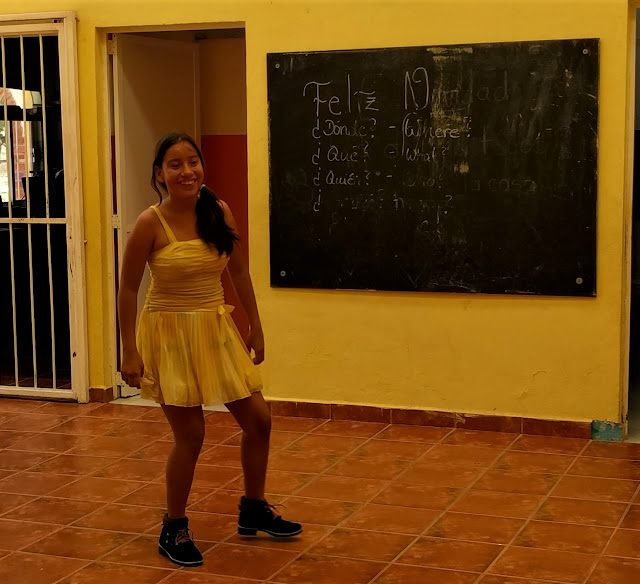 This is one girl I worry about. She is 13, and I just want to protect her by placing a big bubble around her. She looks older than her age. I just worry like the freak mom that I am. 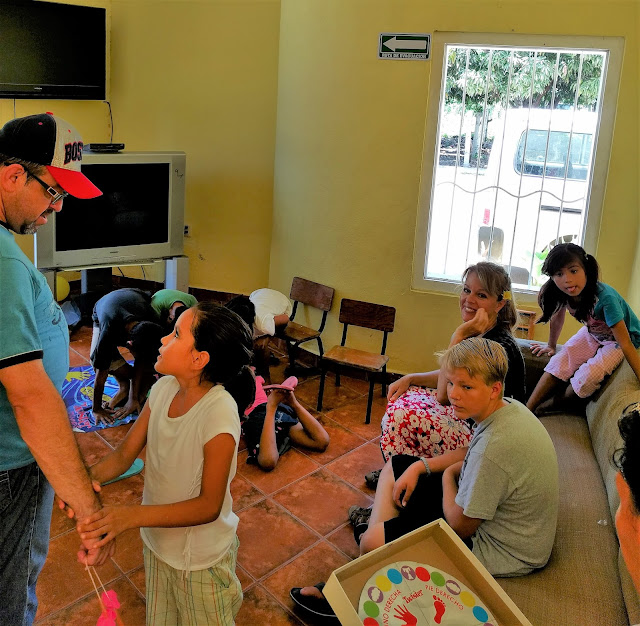 We spent a big part of the time playing twister. I couldn't play because I wore a skirt, but they let me call out the colors. By the way mano (hand) is feminine and pie (foot) is masculine, so you need to change the "left" and "right" to reflect the masculinity or femininity. So you say "mano izquierdA" but you say " pie izquierdO" It was good practice for me! Italian and Portuguese have a lot of similar words with Spanish, but they sometimes change the gender of words between languages and I get confused. 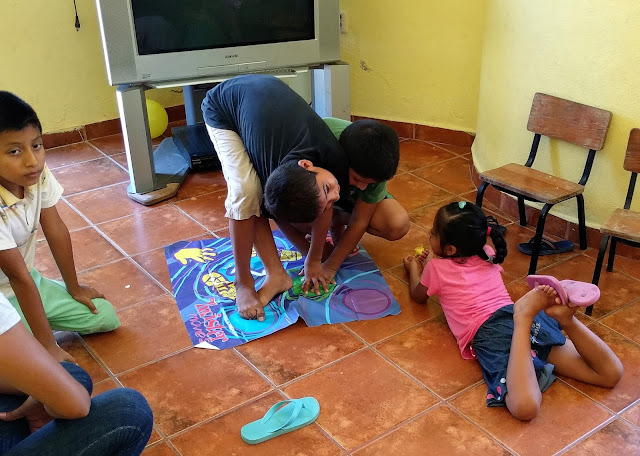 This is right before they fell over. haha 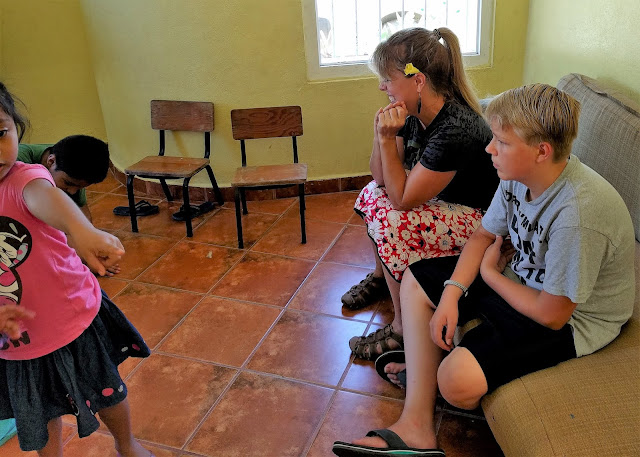 Little Kai was so worried that he wouldn't be able to do anything because he doesn't speak Spanish, and it actually was a little hard for him. Ari is so used to jumping into social situations where people don't understand her that she was fine. In fact they had a little deaf boy there, so everyone was interested in her and her devices. She did great. But Kai kind of held back, and I feel bad now I didn't facilitate things for him better. 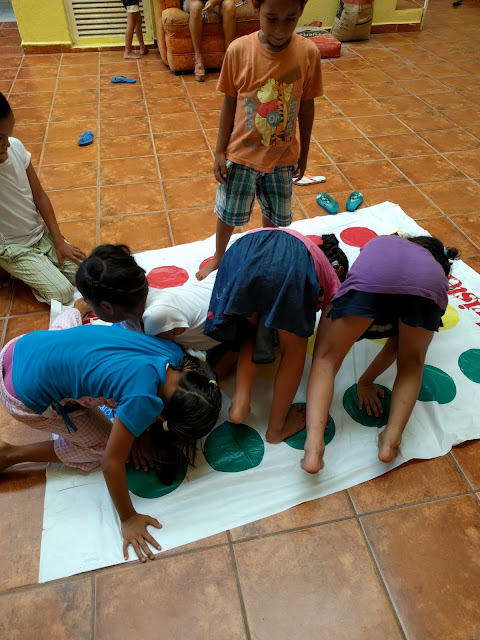 We had two twister mats, a small one for two people, and the regular big one. 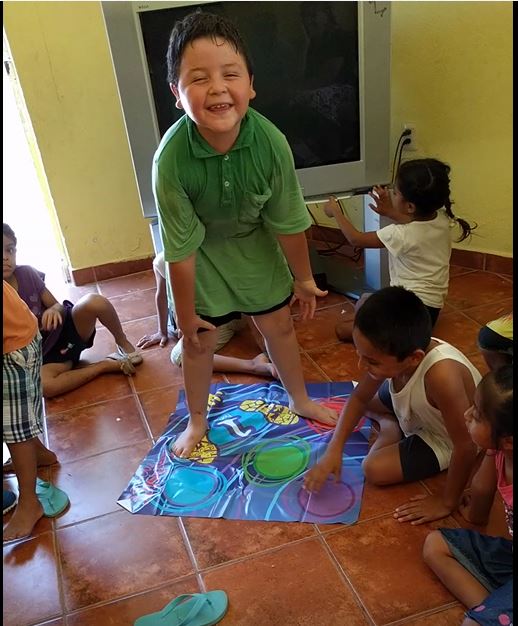 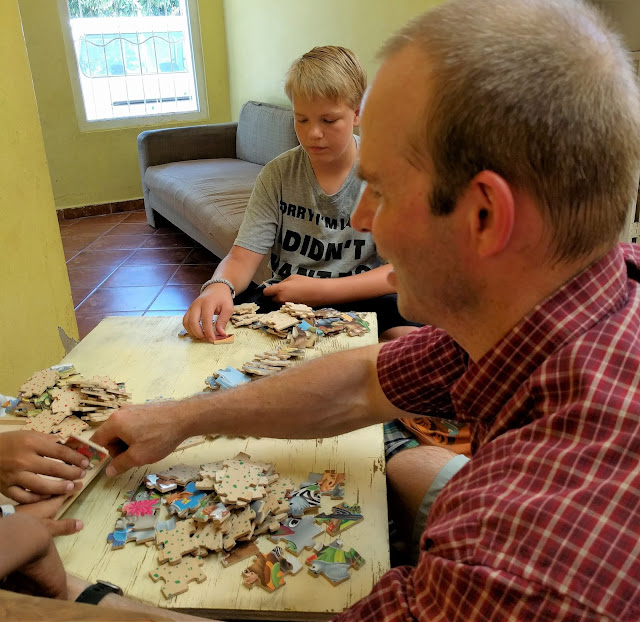 We did some puzzles together 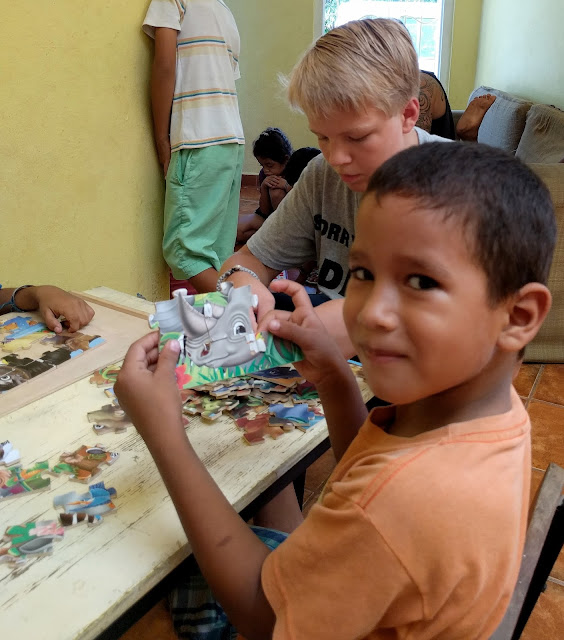 This is the little deaf guy. I hope they are able to get some aids for this kid. He doesn't even sign. I am really worried about him too! He has an appointment with a specialist next month to test his hearing to see what remains. I don't know. Things are hard down here so they don't know where money for aids would come from. The thing with aiding a kid this old is that they usually rebel against it. It takes dedication and perseverance to keep those aids on, and I can't see that happening even if they can afford to get them for him. I asked about sign language, and the woman who is there every day living there --like the house mother --said he wasn't interested in learning the signs. I told her of course! Most boys aren't really interested in learning stuff at that age --totally normal. But he is missing those crucial language acquisition years! Agonizing for me. I don't blame the lady, she doesn't know any better, and I wasn't about to launch into a lecture or anything. Sigh. 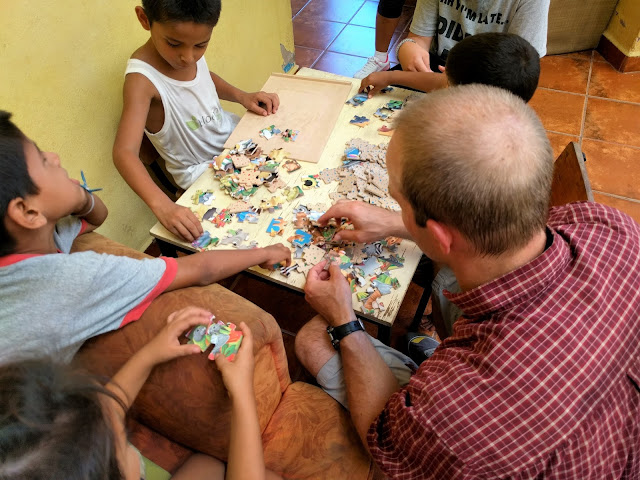 Back to the playing :) We had a lot of puzzlers! 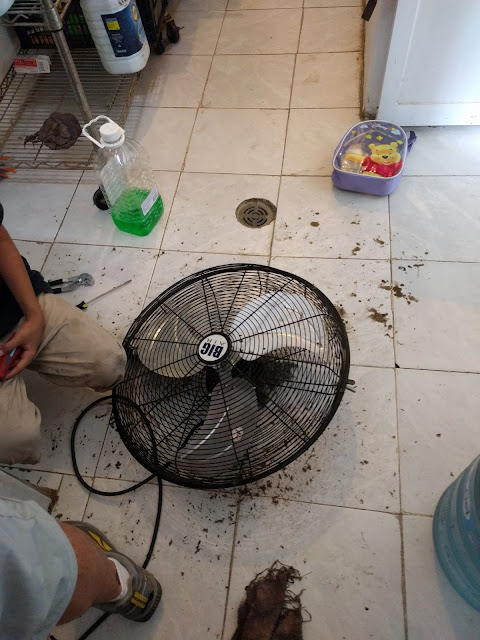 Then they finally put us to work. I helped the little boys, then the little girls shine their shoes. We cleaned off regular ceiling fans, then spent what seemed like forever taking apart this fan to clean it (notice the grime on the floor?) and putting it back together. The nice thing is these little boys LOVED taking things apart. We had their full attention. 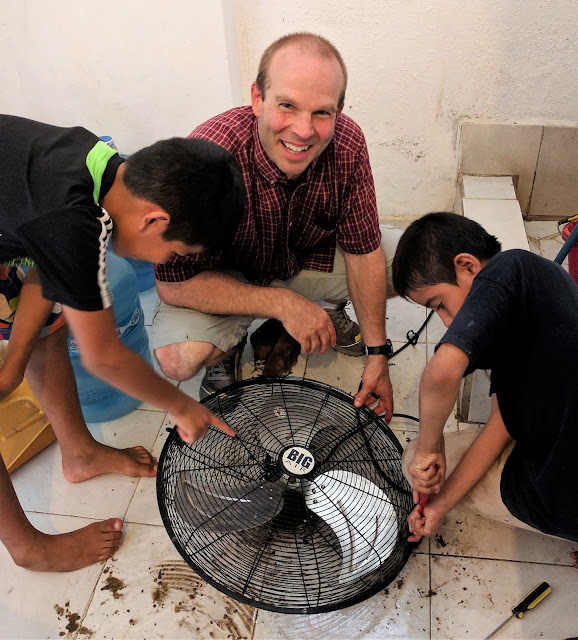 We were able to donate and bring some school things for the kids, but the best was just spending time with them.

What a meaningful experience. Even though Kai didn't feel totally at ease, I think, even he will never forget this experience. Bravo for making it happen.

What a nice experience. I found Ari's ability to jump in and connect in any social situation amazing. Hurray for her.