First real day here. With crabber at the end. 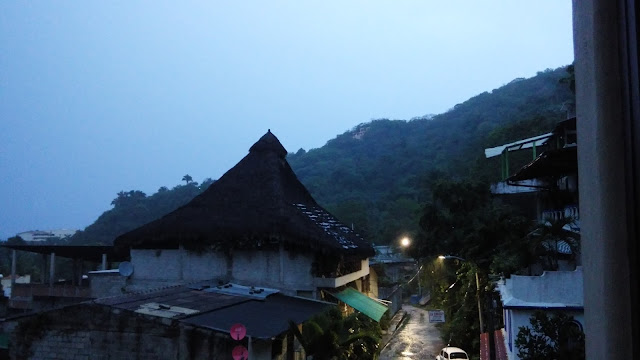 Yesterday I kind of half woke up at 6:30, and the thought crossed my mind "I get to go snorkeling today!" I jumped out of bed and got dressed. The funny thing is, that here where we are further south on the globe, the sun doesn't come up until close to 8:00. It was pitch black outside and pouring rain. 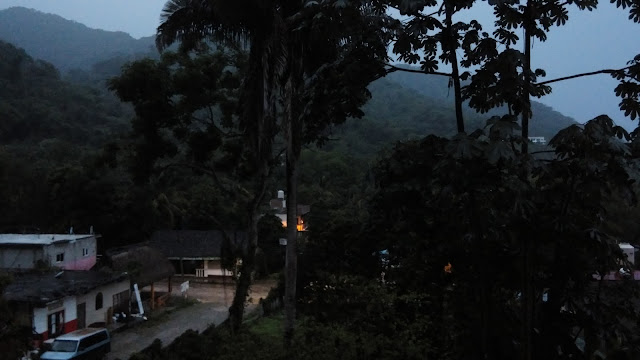 Fine with me. It was spectacular watching it pound down on the trees and all the green things from my balcony. I read my scriptures, did my language practice, and watched the storm. 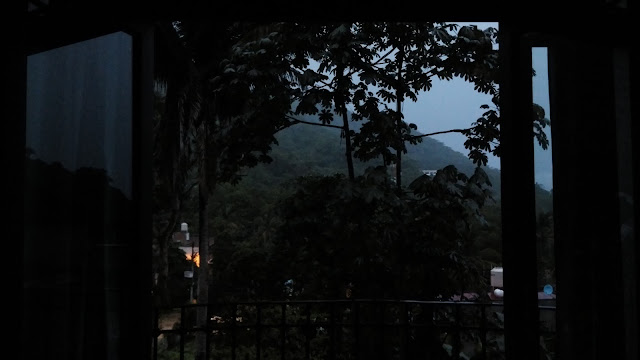 There was a small group of huge birds that kept calling to each other and landing in the big papaya tree right outside my railing. They weren't brightly colored, but they were huge --about the size of pheasants--and had big dinosaury feet.

Finally it got light enough that I felt like I could wake the kids up to go hiking. Jeff was going to take them trail running every day, but he's kind of out of the picture there for a while so I took them with me. Well, after I threatened and threw Kai's blanket out of his room and into the hall, and tickled feet, and flashed the lights on and off a few times. They were both a little reluctant. Heh. 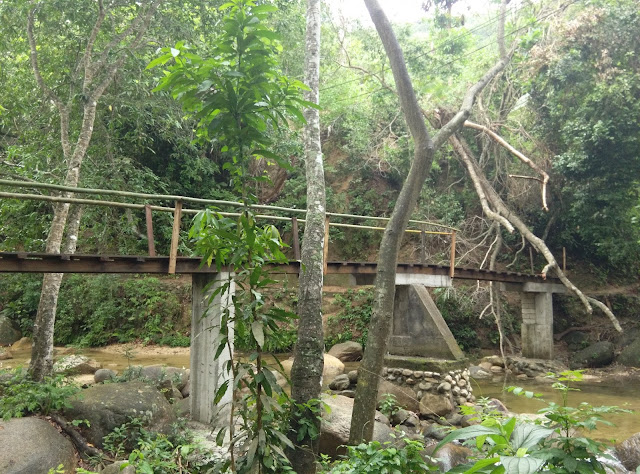 The owner said there are all kinds of trails up in the jungle behind the house, but I'll be darned if I could find them. We wandered around a bit, and finally saw a trail that seemed to be going somewhere, but it was petering out when we ran into some little girls bringing home "los mandatos" to their moms. One carried eggs in a bag, the other a liter of oil, and a second bag. They volunteered to help us find a way to go. 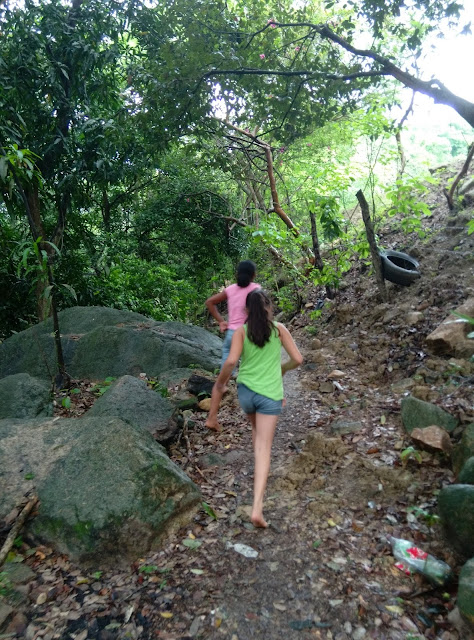 The idea that we just wanted to hike in any direction for 30 minutes or so was lost on them. "pero adonde quieren ir?" or "but where do you want to GO?" haha. We did some loops and started climbing what looked like a cool trail until it ended in someone's front yard, and finally the older one asked "do you want to go to the zoo?" "sure" I said. "I told you so" she said to the younger one, and they led us to the zoo. 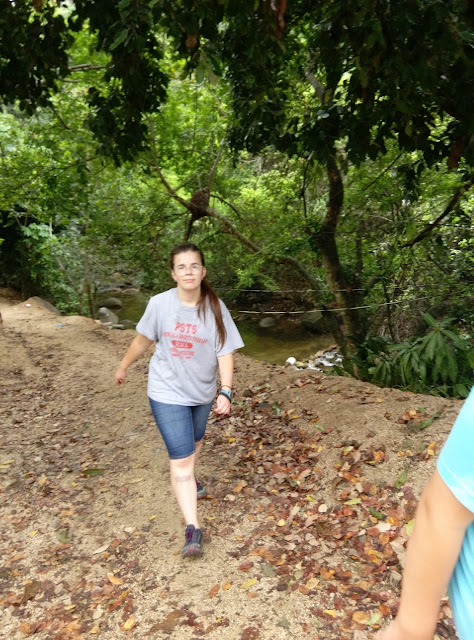 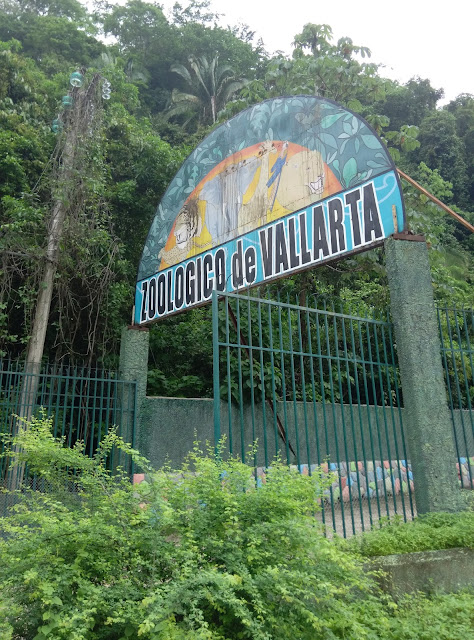 On the side of the zoo luckily, was the path you take to El Edenva which is the set where they filmed Predator years ago. I knew this trail would go plenty long, so it was a win for everyone. We will hit the zoo another day. 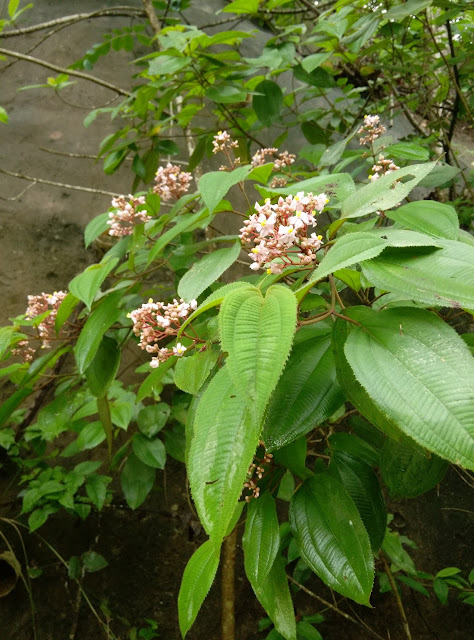 I kept saying how this looked like Disneyland. So funny, that most of us have seen the imitation jungle much more often than the real thing, so that it seems like the real is imitating the amusement park. This was not the dry sparse jungle of  Pacific Nicaragua, it is LUSH around here. 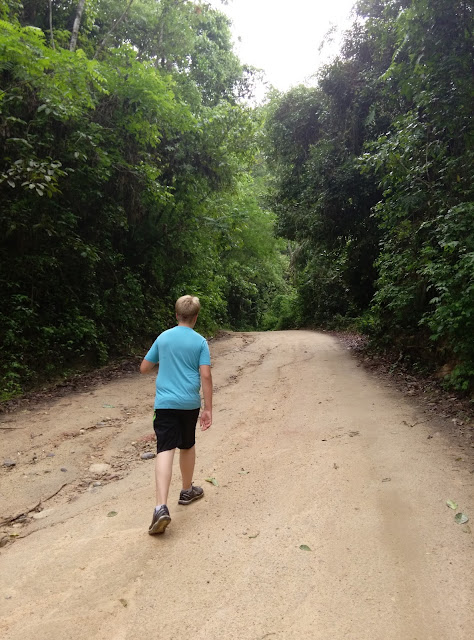 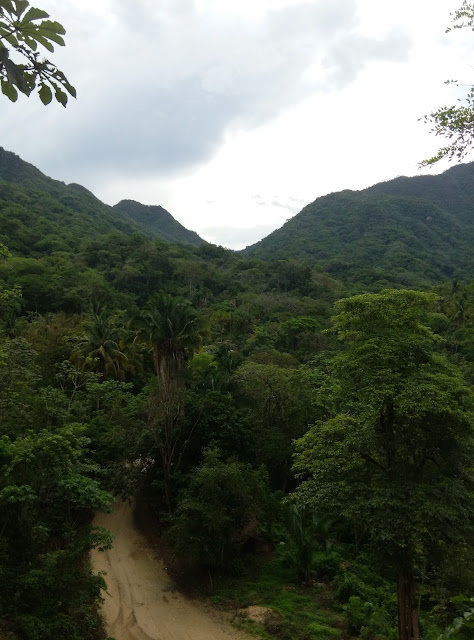 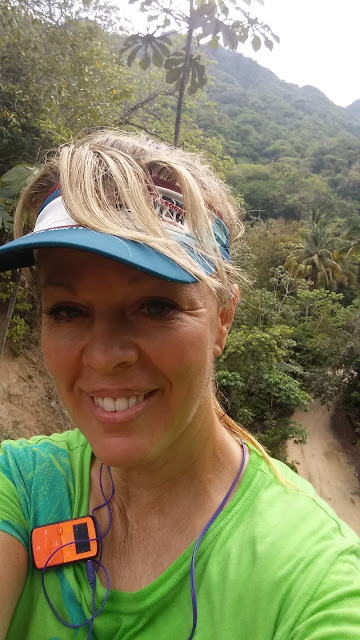 The heat along with the early rainstorm left everything including us steaming wet. Kai kept complaining about how much he was sweating, but some of the damp was just the air. 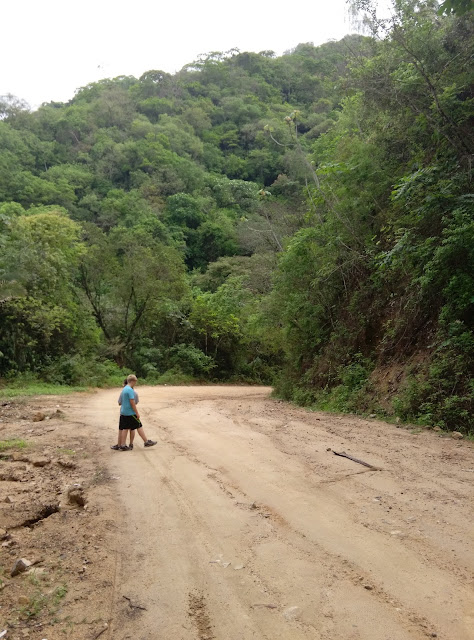 I wanted to try to get to the top, but my kids mutinied on me at 30 minutes and we turned around to go back. 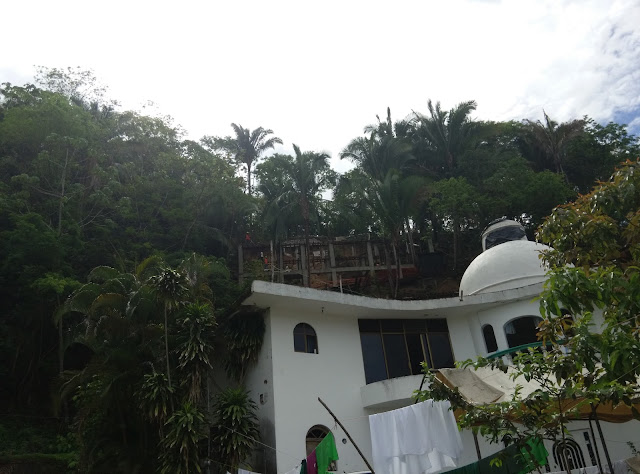 They are building a house into the cliff next door to our building. Kind of an amazing process. 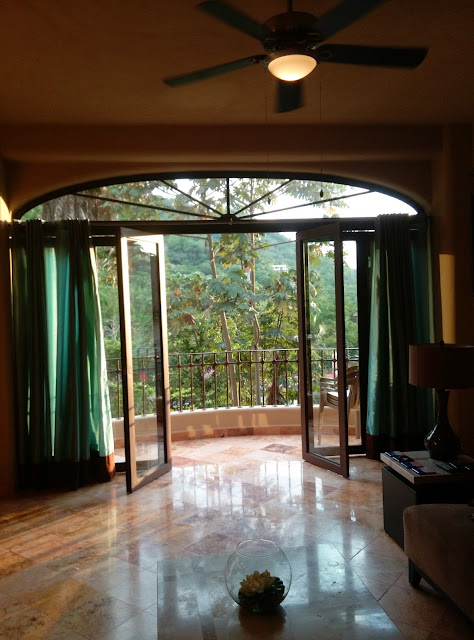 We ended up at the beach, and the pool, and driving into town later, but I thought I would give you a little tour of the rest of the condo before I talk about that. This is the living room. The glass doors actually open all the way, opening up the entire wall in front of the balcony. The whole place is meant to open up to let air flow through it to cool it off at night. 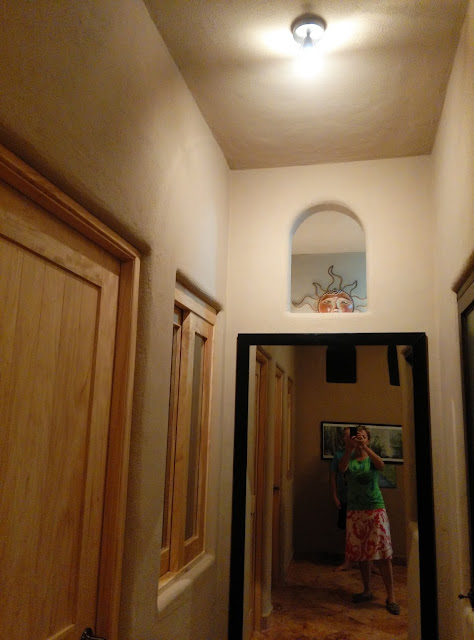 Hallway, notice that every bedroom has a window to open it up to air flow. 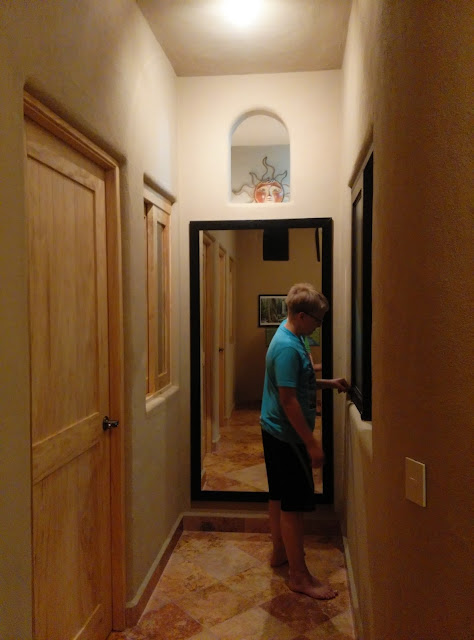 There are two central open atrium kind of things through the middle of the building. There are windows opening into those two. Kai is opening the window here. 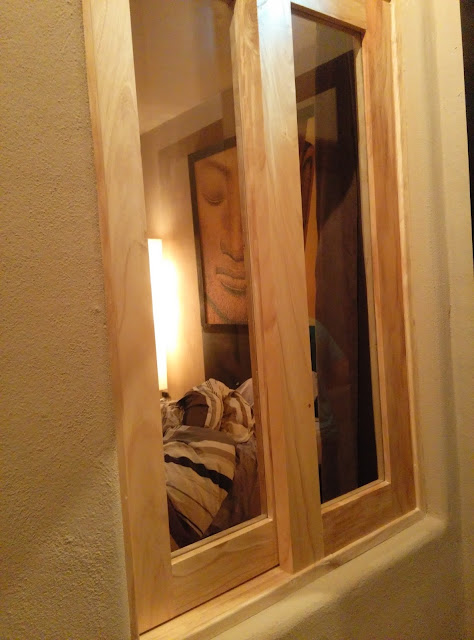 Here is the other Buddha face painting in the kids room. There is a queen bed in each of the two bedrooms, but we went and bought a camping cot for the kids to take turns using so they didn't have to share a bed. 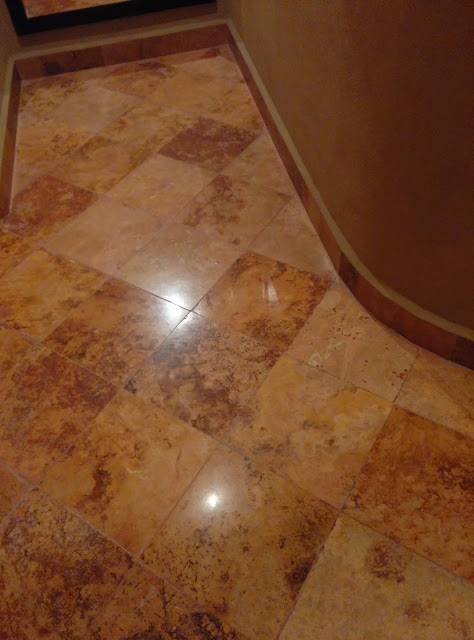 Traverting throughout the whole place, and in places they stained it a terra cotta color. It looks cool. 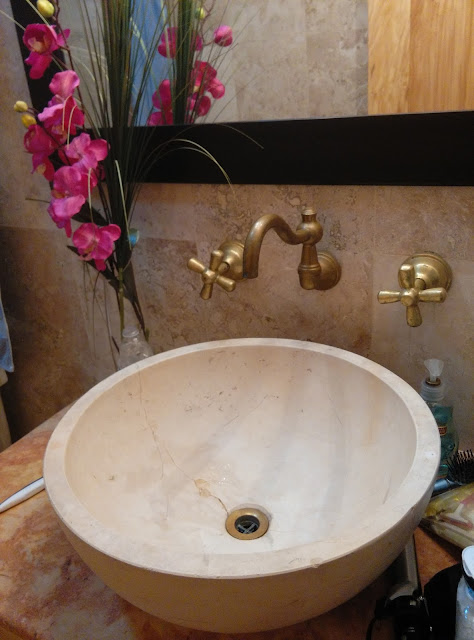 I'm loving the bathroom fixtures --all of this raw brass. 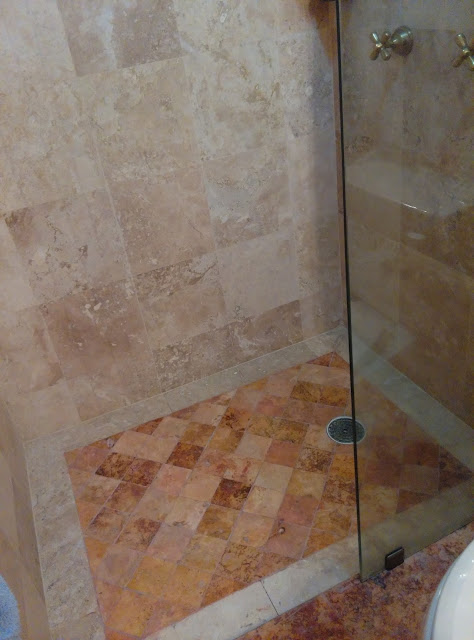 Notice the stained tile as an insert in the shower? 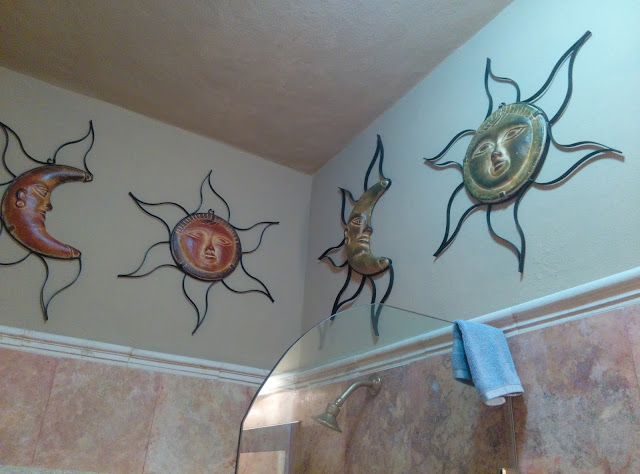 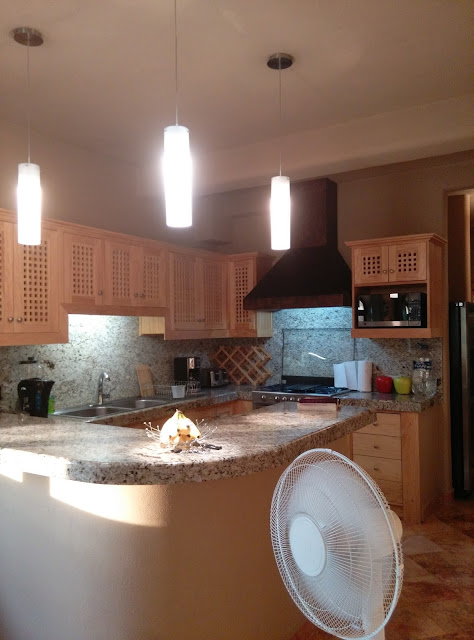 Quite the kitchen. They have every tool you could imagine for making drinks, but may be a  little short on actual cooking tools. I could really use a garlic press! 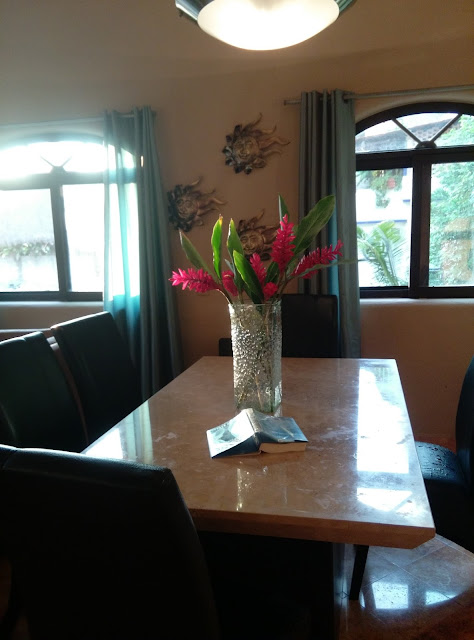 The dining table is also a big slab of travertine. 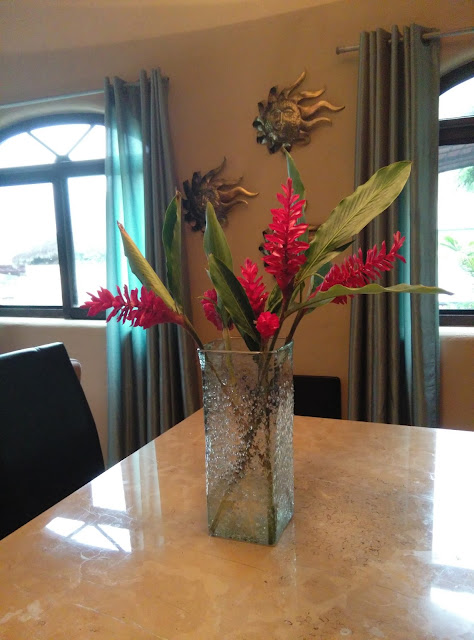 I really thought the arrangement in the middle was plastic. Nope. Real ginger flowers. I have seen them growing around here.

OK, now about the beach. I am nervous to take my phone down there for pictures and leave it on the beach. We ended up going down there around lunch time so Jeff came with us. He seemed to be fine walking down there and back so that's a relief. There are a couple of restaurants set up right on the beach with lots of outdoor tables, but they are mostly empty this time of year. Not completely, but not too bad. We scooted over to the side of the little bay where the rocks were, knowing that that is where all the fish would be. Ari wanted to just read on the shore, so I didn't push her, but jumped out there with Jeff and Kai. The water wasn't the clearest, but was about La Jolla cove clear --not too shabby. Lovely fish. Big blue tangs I think? and black and white polka dotted puffers, long skinny needlefish, and Kai saw what we think was an eel. He thought maybe it was a baby turtle head poking out of the rocks. Jeff had to go back after abut 20 minutes, so we all came back to shore to talk Ari into coming out. She was able to snorkel for a good little stretch before getting nervous and asking to go back. I took her right back, wanting it to be a good experience for her.

The kids played in the pool until dinner, then after dinner we all went into town to get some groceries. We just went to Walmart because maybe we are lame, but it doesn't look anything like a US Walmart inside. Lots of Mexican products, and great produce. Mangos are about .50 a pound and are fabulous. There is a full Mexican bakery in there, and if you have ever been to one of those, you know they kick booty on any of our bakeries at home. You are given a big round tray and a pair of tongs when you walk in, and then you try to balance as much good stuff on the tray as you can without the whole thing toppling. You come up the counter when you feel like enough of a selfish pig, and a lady wraps each item up like a little present for you. Oh! and grab a packet of fresh warm corn tortillas on your way out of there. At least you don't have to balance those on your tray.

We packed all of the groceries into the car, and we each munched a little bakery treat for family home evening on our way home. Jeff and Kai picked what looked like dingdongs but tasted better. Ari got a version of a pain au chocolat, and I got a little cakelike thing with vanilla cream in the middle. It started getting dark on our way home, and the fireflies came out, flashing in the trees on the side of the road. I kept telling Jeff to look, but he was too busy dodging big coconut crabs that decided they really really needed to cross the highway as soon as it started getting dark. It was kind of like a live version of frogger, but with crabs...and they didn't all win I'm afraid.

So fun. Sounds like the perfect day, but maybe not for the crabs.

Wait! I need to see the crabs!

I really love that house!