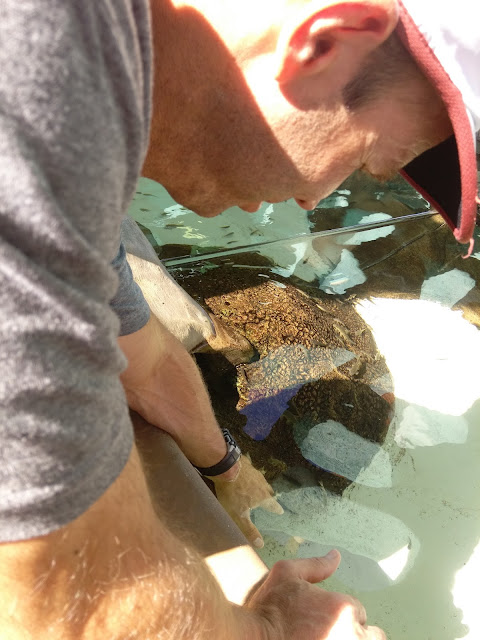 One of the places I'd dreamed about going back to in San Diego was Sea World. We went all the time when I was a kid when my cousins came to visit. I remember being awed by those killer whale shows, enchanted by the tide pools and aquariums. Jeff wasn't to into the idea, since we took the girls when they were babies and needed naps. That was a miserable time. I swore this would be better. 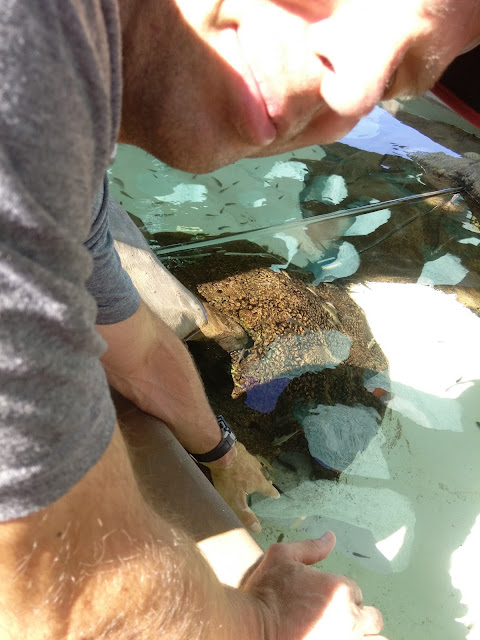 In some ways it was great. This little tide pool tank near the entrance was full of those little cleaner fish. When you dunked your hand, they would come up and nibble all over it. I'm wondering if they are the same fish used in those pedicures in Japan? Jamie? Any idea? 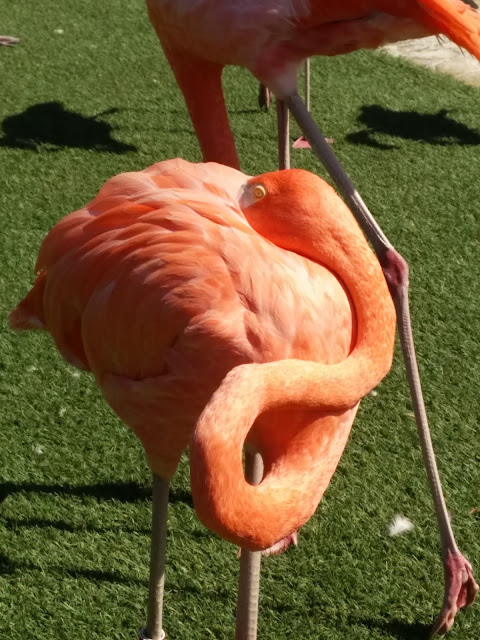 Love me a good flamingo. These birds are too ridiculous to be real. Just...awkward looking. 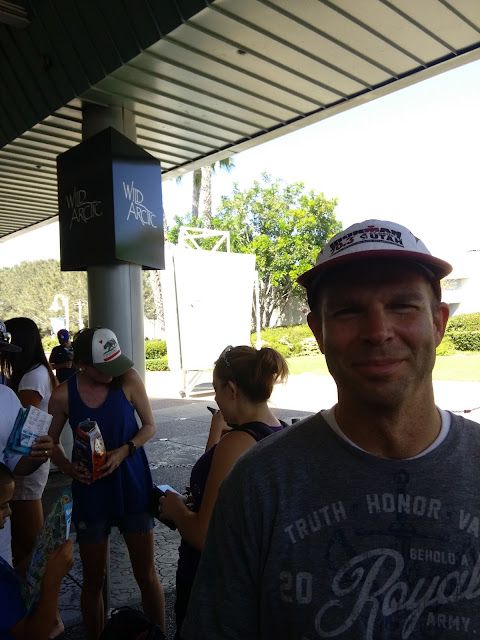 Sea world still has the "Wild Arctic" ride/ exhibit that I remembered from years ago. It's like Star Tours in Disneyland, but you fly over the arctic in a helicopter. When you land you go through the (real) polar bear and beluga whale enclosures. 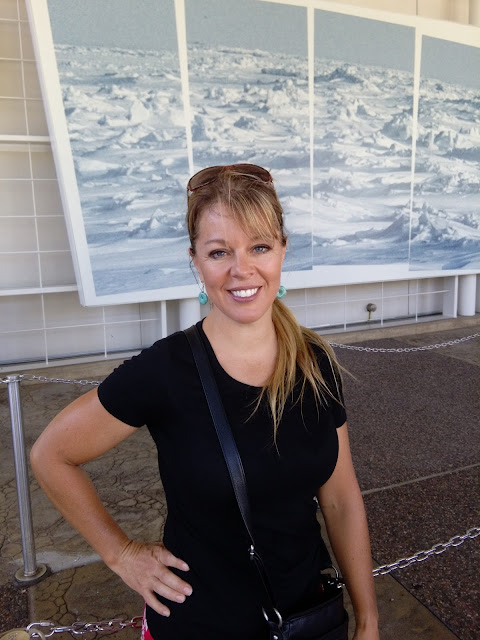 We liked this ride. Made me feel like a kid again. 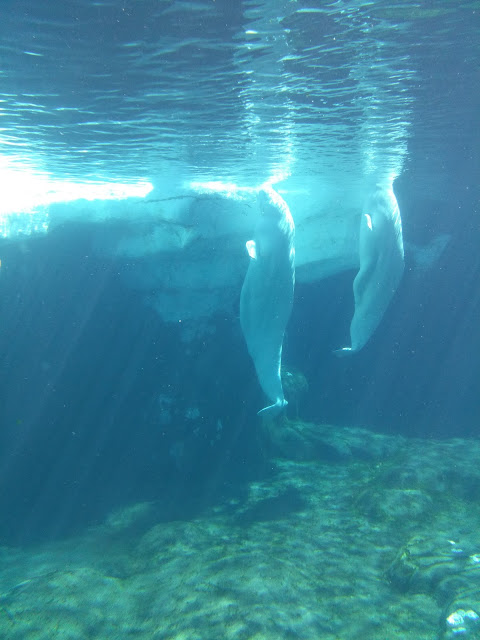 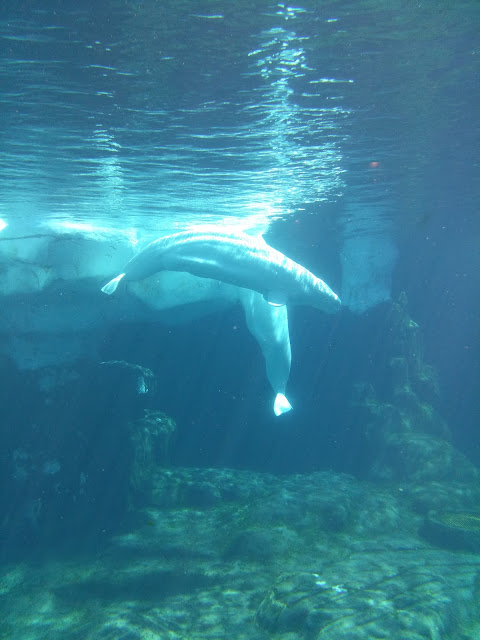 The belugas were magical. Huge and white, they looked like ghosts of real whales. 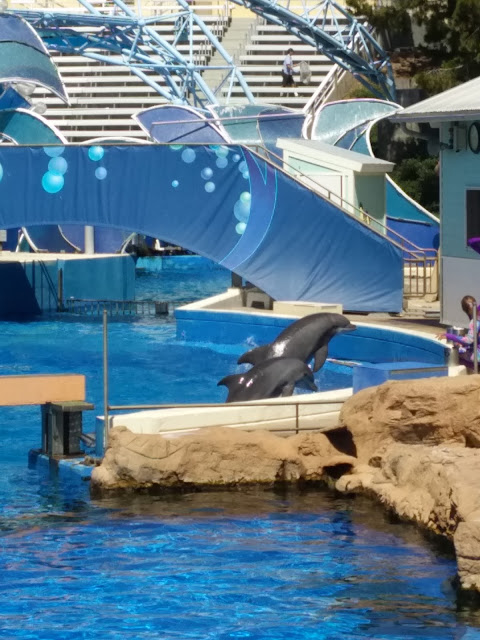 We chanced to walk past the back side of the dolphin show arena, and watched a long time as the trainers worked with the animals, and fed and petted them. 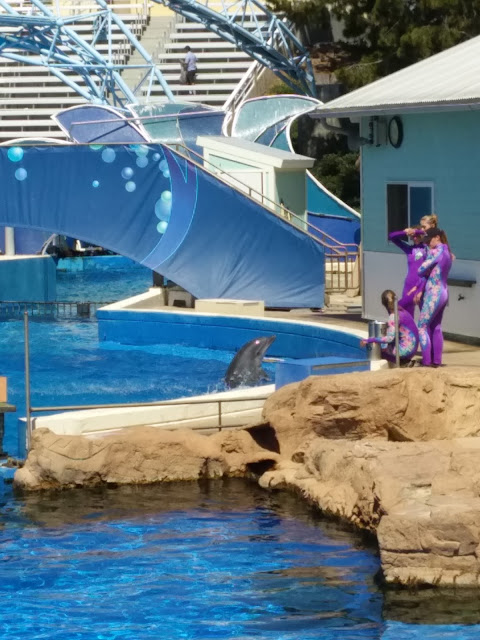 I got really excited. This was part of what made me want to be a Marine Biologist in college. So cool. I should have just grown out my hair and learned to swim better. I probably would have had a better chance of playing with dolphins. 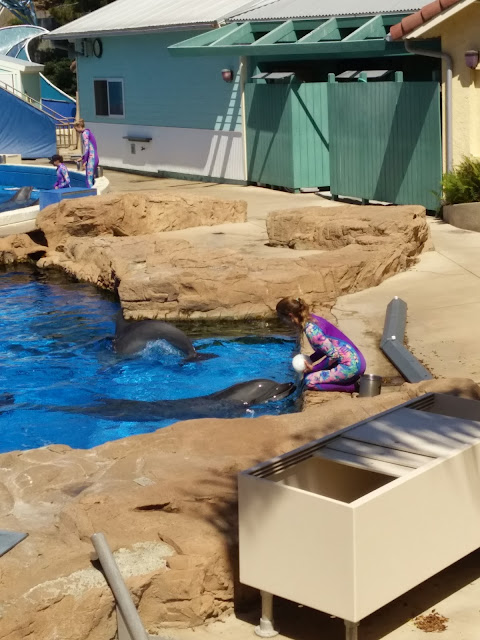 I still wanted to be one of these girls. Dang. I made Jeff hurry so we wouldn't miss the Shamu show. I was puzzled as to why it was only showing once a day, so we hurried to get seats early thinking it would fill up.
When I was a kid, the Shamu show was the best. The music would come on, and the trainers would spout facts about killer whales while the whales circled the tank going faster and faster, until the music reached an almost unbearably tense crescendo and the whales would JUMP out of the water and splash everyone in the lower half of the stadium. They would make another round, and jump with a trainer balanced on their nose, until the guy would DIVE OFF at the top of the jump. I told Jeff he might cry. Not to worry, it would be ok, the whale show was just awesome like that. 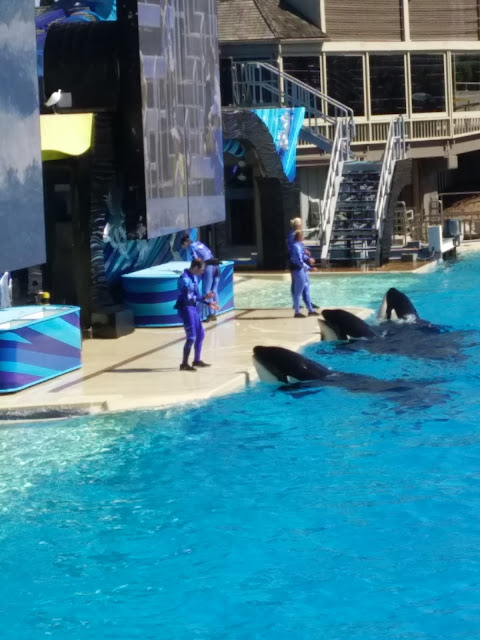 Except it wasn't. This was as exciting as it got. Sometimes the trainers would side step clap up on the little stage, sometimes the whales would do little jumps at the edge of the tank, but the trainers NEVER GOT INTO THE WATER with them. They must have cooked in those dry wet-suits. There was video showing up behind them that talked about the earth and stuff, but it was just overall a boring show.

I have to feel for Sea World. Ever since Blackfish came out, they have had profits nosedive, protesters outside their gates, rockstars boycotting them, horrible stuff. They are trying to "fix" everything, but the whole premise of their park has been undercut. I don't want to hurt the whales or anything, or heaven forbid--a trainer --but it was a bummer. I wanted a show. I could say one thing about those old shows, you really felt the majesty of those whales. I was seriously impressed before by what felt like the coolest mammal in the water. Now, not so much. 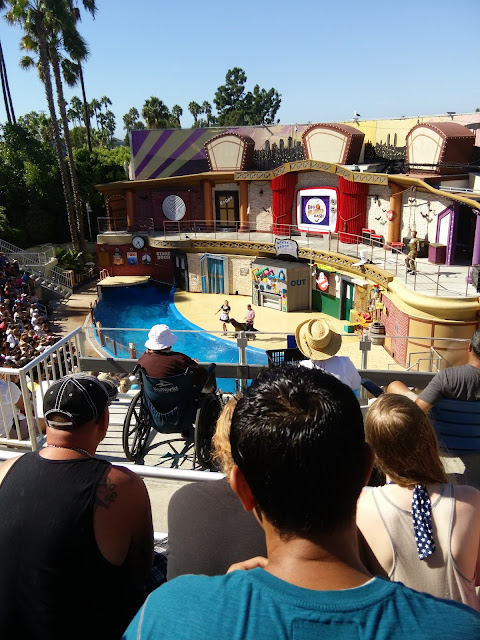 We tried the dolphin show, but it was the same thing. No trainers in the water. The sea lion and otter show still had its goofy jokes, and was mildly entertaining, but at this point I was depressed.

We went on some more rides to cheer up, yes rides --there are four or five rollercoasters in Sea World now, and they were pretty awesome. But they didn't feel like Sea World. I wish I could help the park somehow. I'm afraid they are doomed. 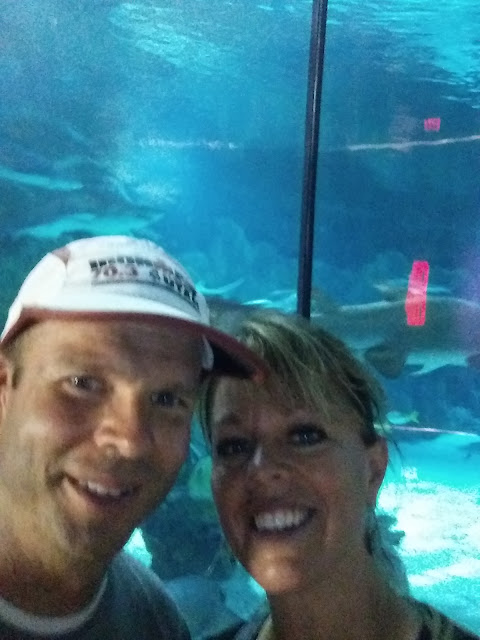 One thing at the end that brightened my day were the shark tanks and huge accompanying aquariums. These were just as dazzling as ever.  I love the shark tunnel that you move under on a flat conveyor belt like you are a sushi dinner for the tiger sharks. We went back to our hotel on a high note.
Tweet
Posted by Amara at 4:03 AM

Really really? That makes me sad and angry! Brinlee will never see the REAL shamu show? Those losers with a vendetta ruined it for everyone. I wish people would look into it before jumping on that bandwagon. :(

That's really sad. We were therea few years ago, and must've seen the last of the shows. And, YES, those tiny fish look just like the "fish spa" fish. Though we saw some HUGE ones in Kuala Lumpur.