Day trip to Culebra, and Running through El Yunque 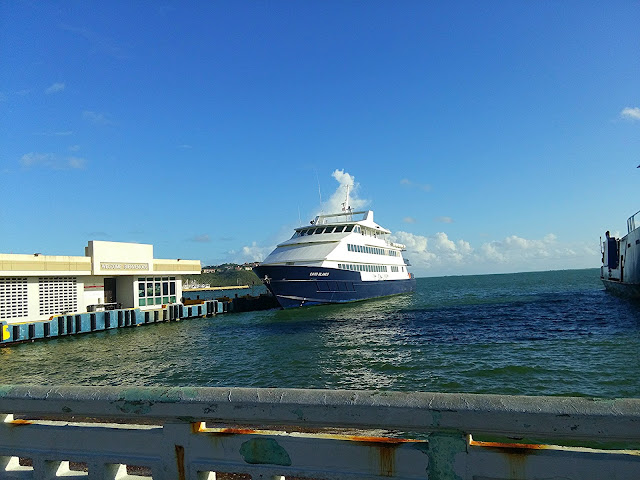 I had done my research before going on this trip (in the 3-4 days I had to prepare anyway), and figured that Culebra, a little island off of the north east corner of PR was the best place to go for some real snorkeling. We talked to the concierge about it, and she suggested some tours, all which ran around 120.00 a person, but then mentioned the ferry that all of the locals take. It runs in the morning around 9:00, and comes back around 1:00, and again around 5:00. $3.00 or so apiece. That sounded great to us. We are all about trying to do what the locals do anyway. I was a little worried because some blogger had said the ferry schedule was erratic, and unreliable, but it seemed really professional to us. We had no problems. 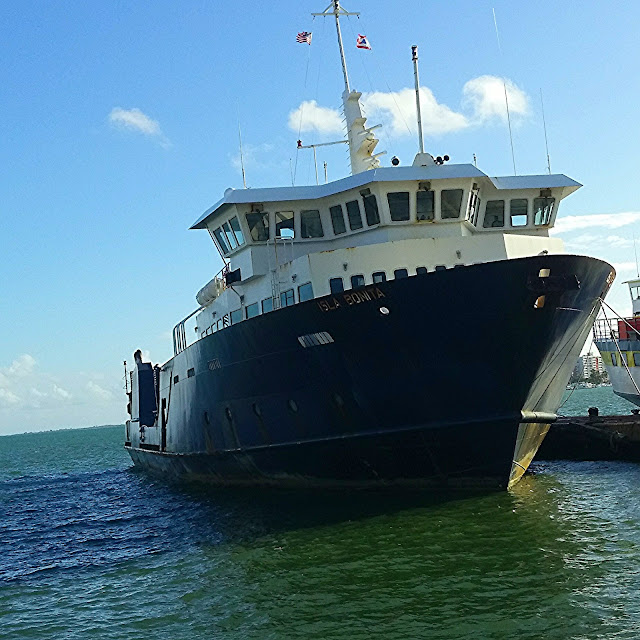 I was really hoping this was our boat: "La isla bonita" --you know, because of Madonna, but we were on the other one. 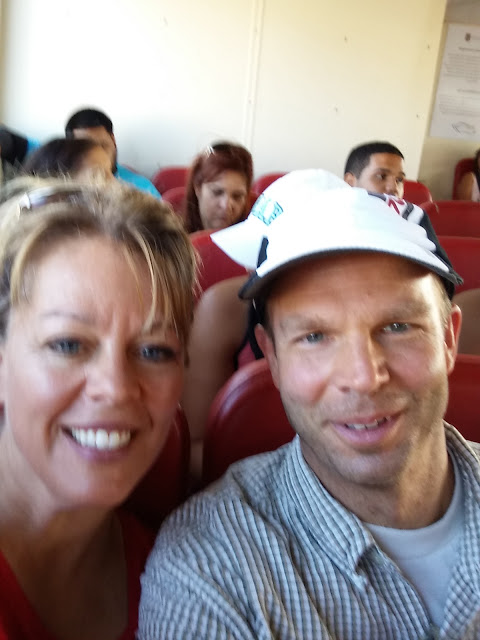 We settled into our cushy seats and watched everyone else board. Lots of people had some serious luggage with them --like they were planning on staying a month or more. Once we saw the island we could understand that. It was lovely. 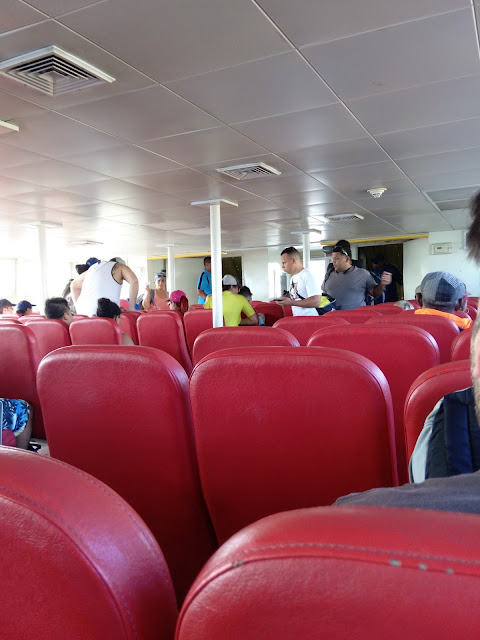 The sitting didn't last long, I had to stand and look out the window the whole time to not get sick. It was pretty rough. Not too bad coming back, but on the way over, more than one person threw up. Luckily I didn't notice at the time. I was too busy staring with a visual death grip on the horizon. 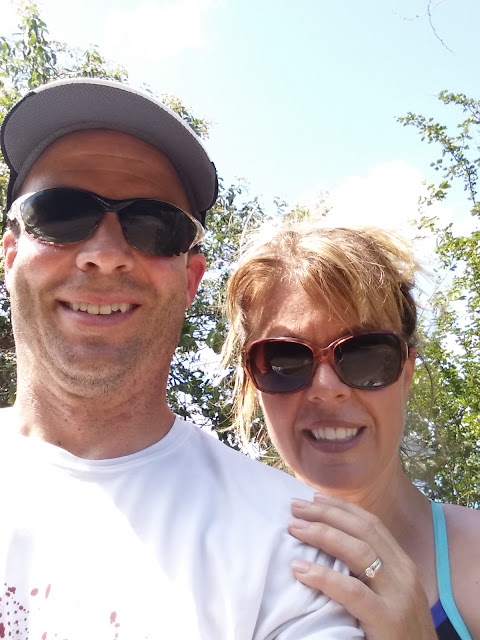 Once we got there, pretty much the whole ferry full of people went to Playa Flamenco, but we asked around, and found out that Tamarindo beach was better for snorkeling. We paid a taxi guy to drop us off there, which really was pretty nice of him because this was an undeveloped beach, and the route there was over a dirt, potholed road. He also kindly agreed to come back to get us in time for our ferry back. So cool --5 bucks each, each way. We were happy to pay it. 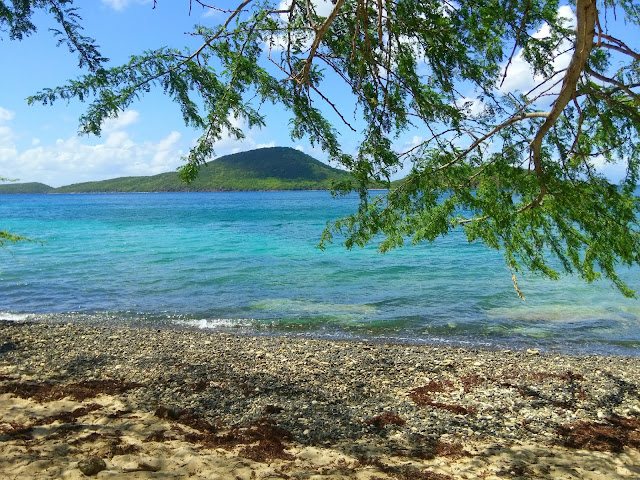 We shucked off our clothes, and dived in. Right away we ran into a sea turtle, grazing along a meadow of eel grass. It was cool to see him take a chomp of grass, and turn his head to pull it out. Looking seaward, we headed to our left, as our taxi guy told us that was where the best coral was. Oh my goodness it was so cool! We saw yellow stag horn coral, with a school of bright yellow grunts clustered around it. We saw bright red sponges, and purple sea fans, and lots of brain coral. We saw one fish two fish red fish blue fish.....I'm going to give another link with some cool fish pictures that look like things we saw. I really really wish I had a camera for under water. 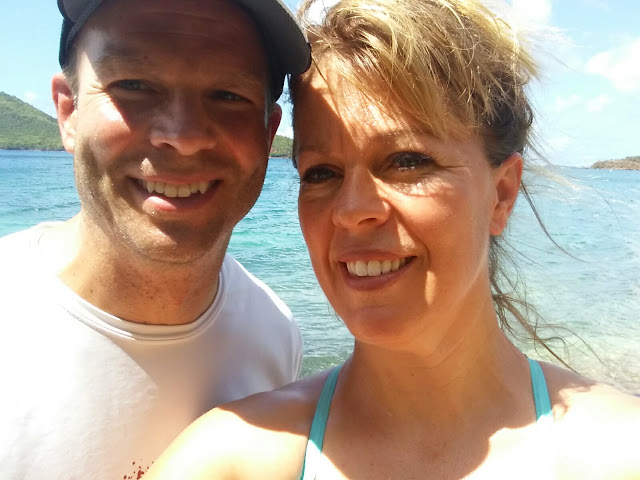 We had bought some cheese from the store beforehand, and planned to feed the fish with it. But there was a small group of some type of jack --vaguely disk shaped silver fish about the size of my hand, with a forked tail lined with black-- that stayed right with us, and were so quick, they ate everything we crumbled up. They even nibbled the cheese out of our hands! Finally we gave up and let them have it all. 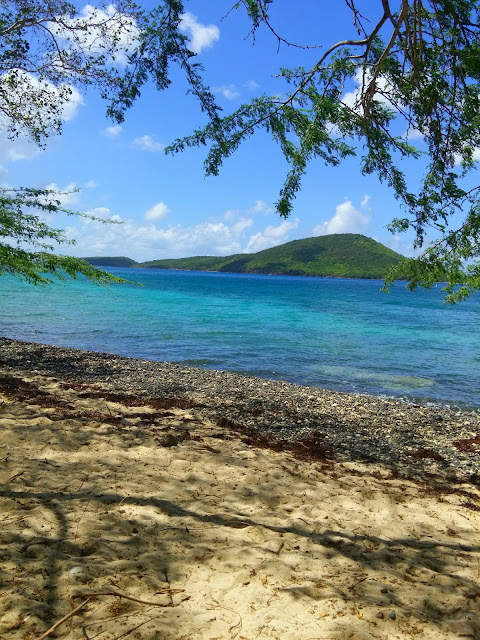 Near the end, we saw a moon jellyfish, which we were glad to see before we ran into it. We also saw two other turtles. A little tiny black and white striped fish swam with me the whole time, right under my chin, and sometimes came up to my mask to say hi. I guess I looked like a pretty big fish to use for protection! Realizing it was time for our taxi guy to come back, we slogged out of the water just in time as he pulled in. We hurried to our ferry, and it was much smoother going back to the mainland. I slept almost the whole time.
We found our car (which we parked on the street for free --when school is out, it's much more crowded I guess, and you have to use the pay parking lot, and get there early to stand in line for ferry tickets. We were lucky in that we were there in the off season.), and made our way back toward El Yunque. 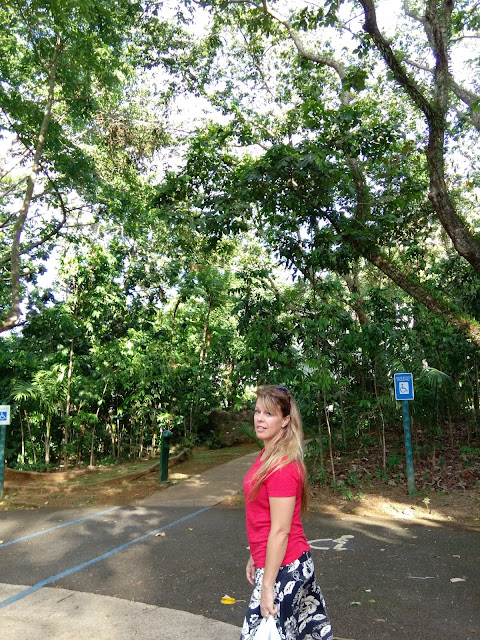 There is only one U.S. national park that is a rain forest, and that is El Yunque in Puerto Rico. I'm sure there are rain forests in Hawaii, but I guess they aren't national parks? Anyway, we wanted to see this while we were here. We brought our running clothes, and stopped at the visitor's center to change and get directions on a good trail to run. 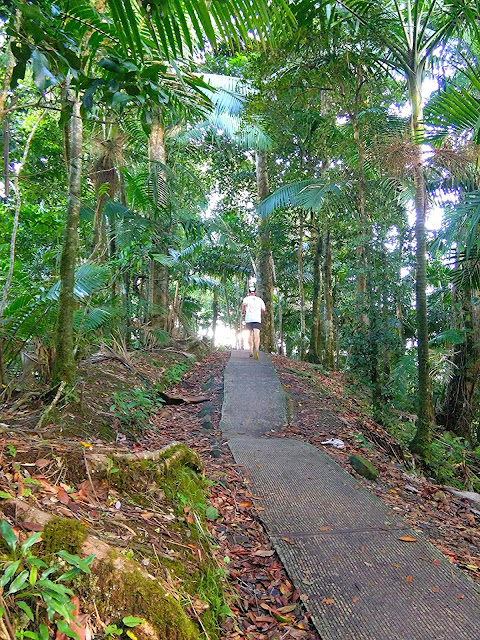 We picked a short one because the sun was going down, and we were supposed to meet Jeff's brother and his new wife for dinner. I was sure glad we made time for this though! 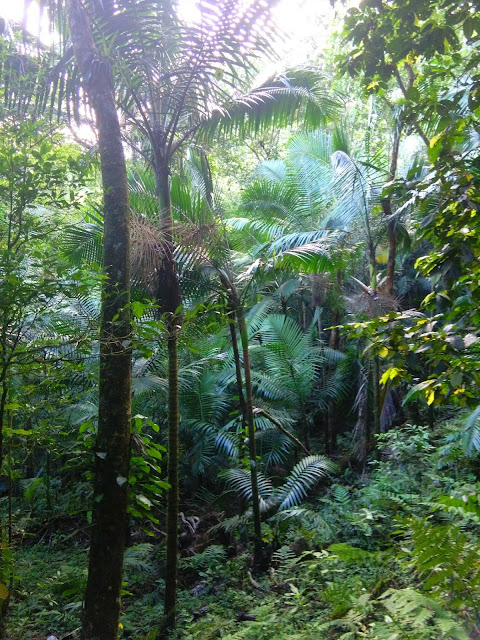 Just luscious. Palmy, ferny, bamboo-y... the only trouble was keeping up with Jeff after taking such a break from real exercise for a few days. 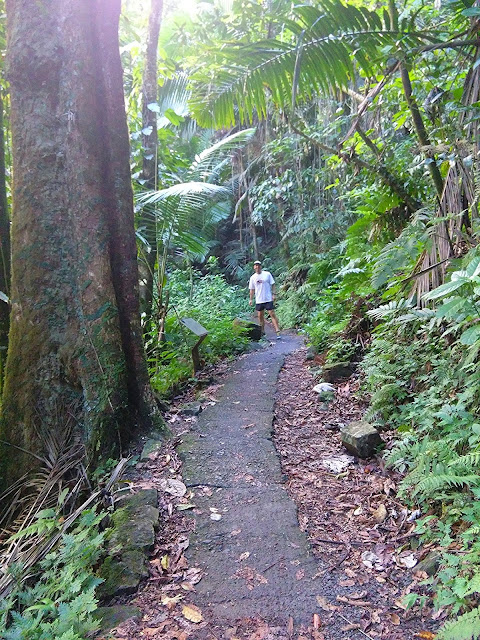 Yeah he waited for me a few times --I was taking pictures! 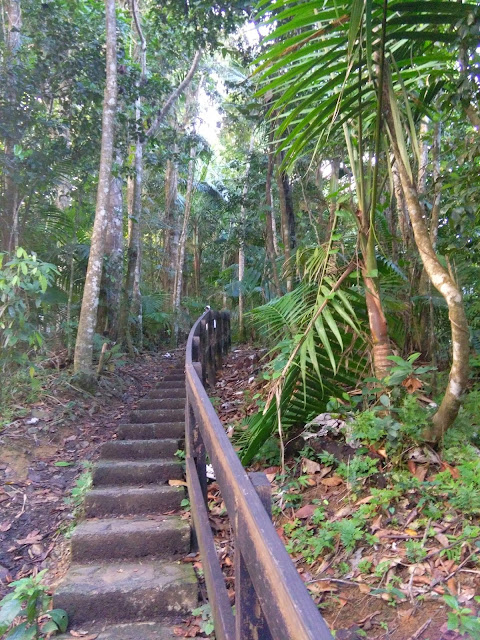 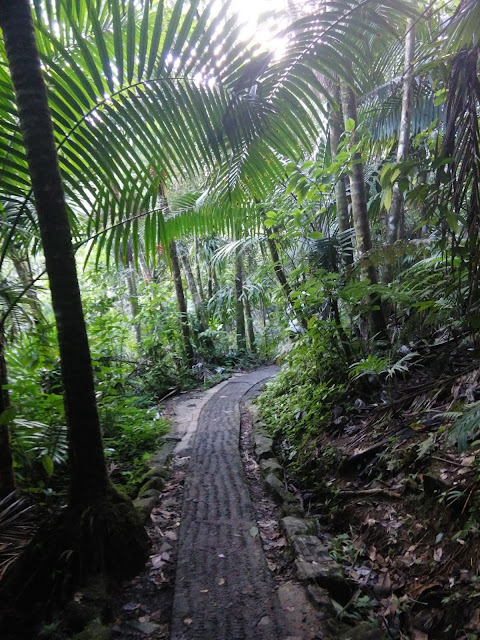 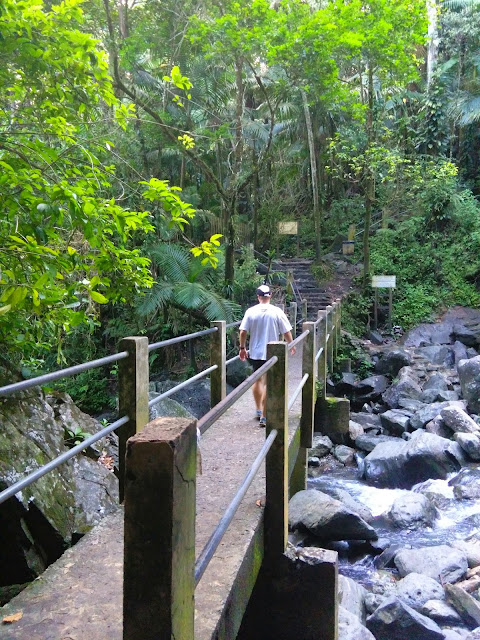 We finally reached our goal, a set of waterfalls that were lovely. 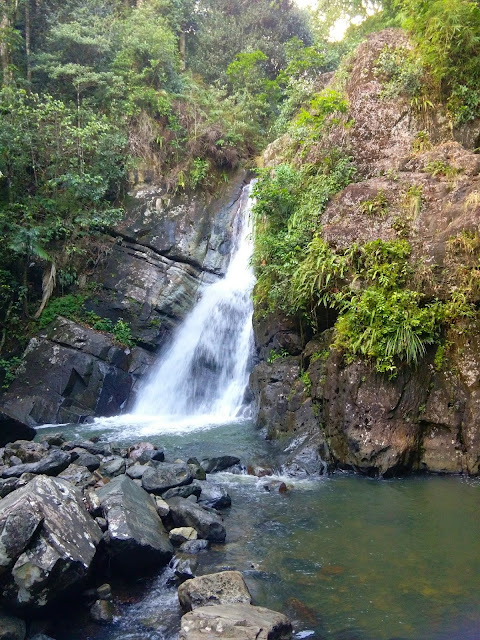 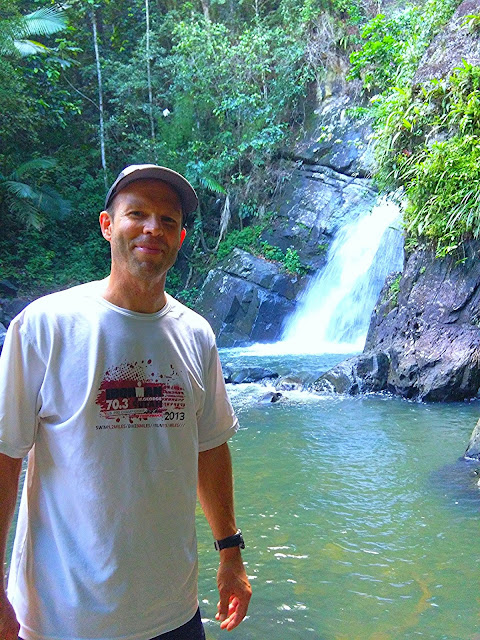 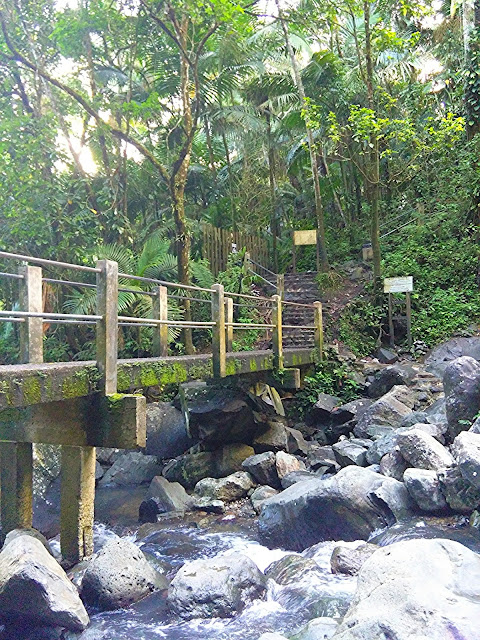 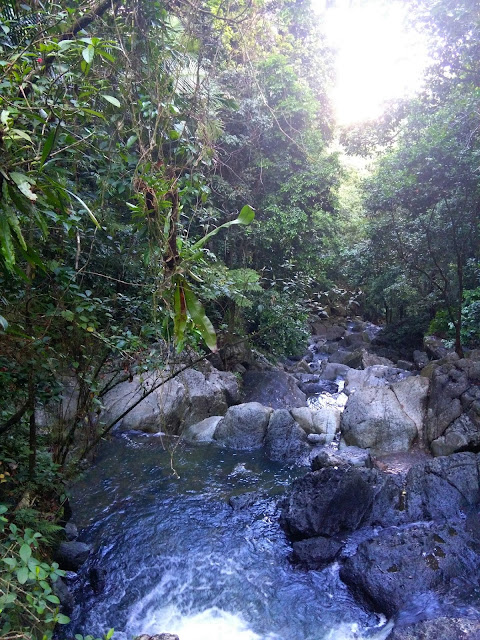 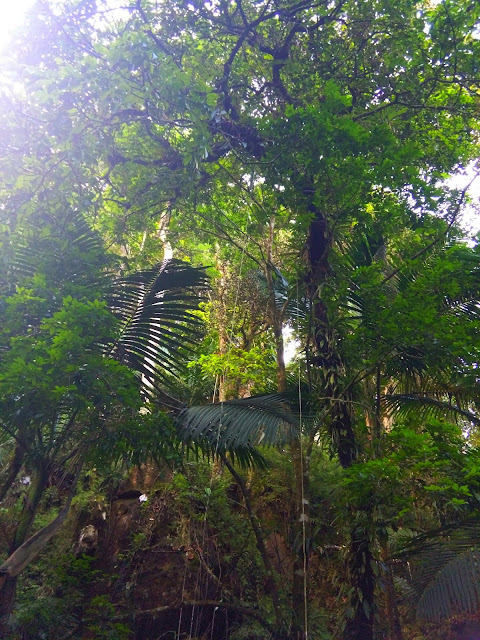 and looped back to the car. 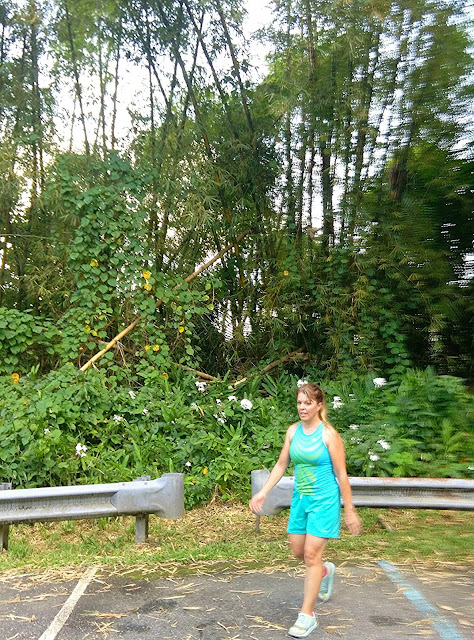 I wish we'd had longer. We were planning on coming back the next morning to do more hiking, but ended up having a very late dinner, and slept in the next day! 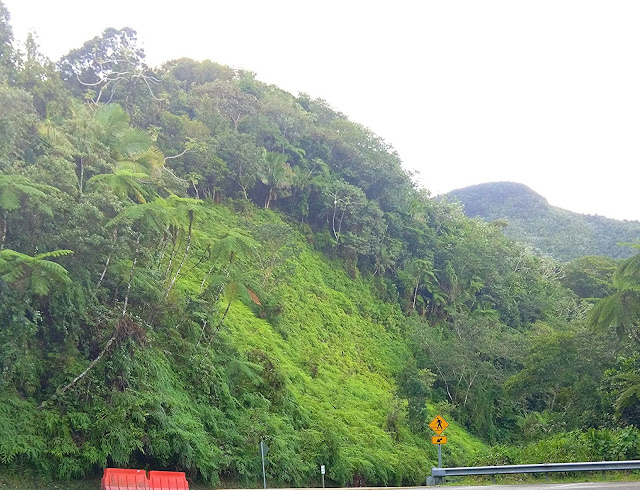 I kept humming the Jurassic park theme song driving through this stuff. Dreamy. 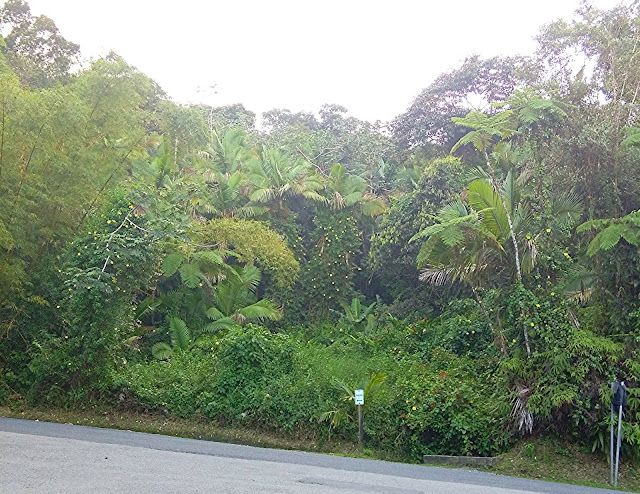 This was also right near Luquillo beach, a big tourist spot. 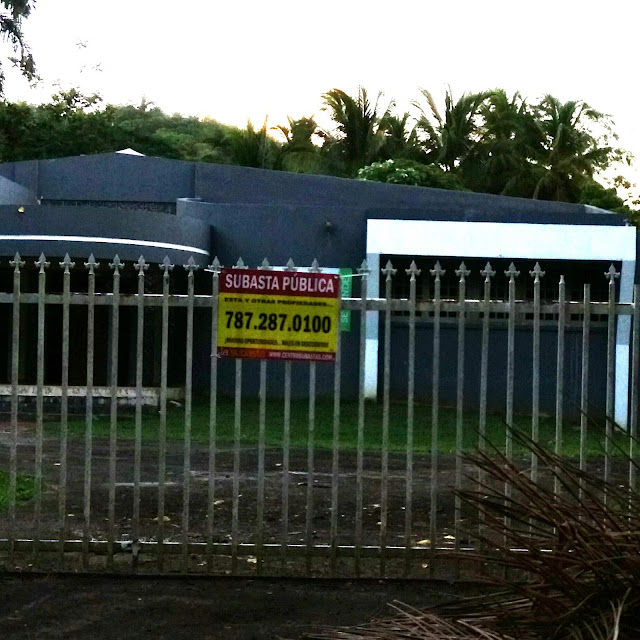 There was a neighborhood right at the base of the park, and we took a picture of a house up for auction. We always do this --dream of living in the place we go to on vacation. Imagine living where you could do all of your runs in a rain forest? Then go cool off at the beach?  Wow.
Tweet
Posted by Amara at 8:03 AM

This was a fun visit. Loved it. Thanks for the post.

Always stop to take pictures!!! Looks a lot like Asia.