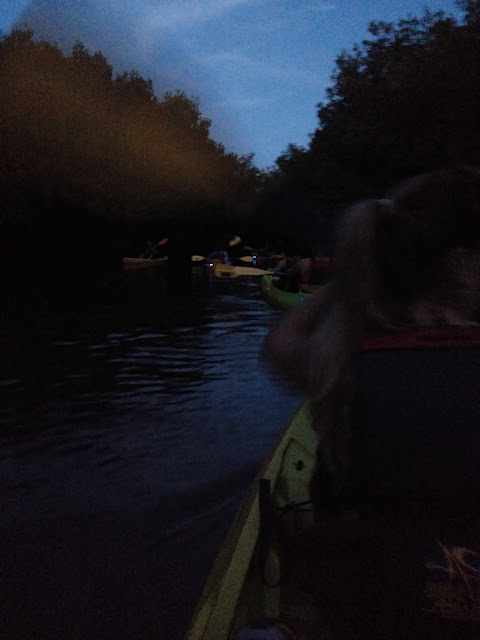 The one plan Jeff and I made before coming to Puerto Rico, was to visit the bio-bay. There are supposedly 5 places in the world with high concentrations of bio-luminescent plankton, and Puerto Rico has three of them. Jeff's brother knows one of the tour guides, and made a reservation for us.
We were so late leaving the reception, we got to the bay late, and missed all of the kayaking instructions, but since we had kayaked in the isletas in Nicaragua , we weren't too worried about it. We got in our kayak and followed the rest of the group. 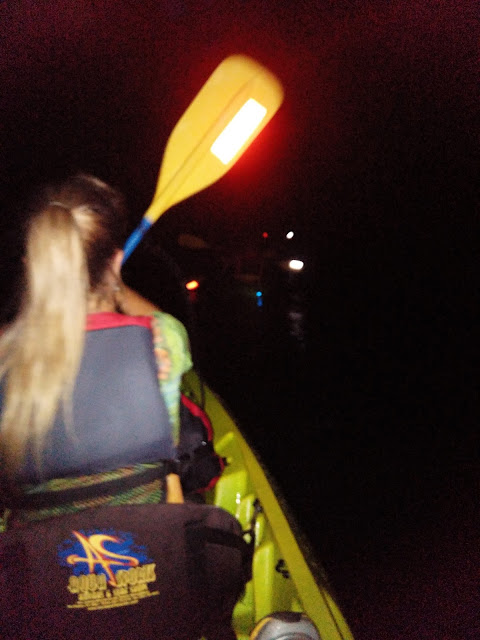 We left at sundown as you might have imagined, and each kayak had an LED light on either end to keep the boats from running into each other. We followed single file (ish) through what was like a river between mangrove groves (is the second grove redundant?). The little coquis were chirping, and all in all, it was a lot like the Pirates of the Carribean ride at Disneyland. Except better. It felt real. I kept telling Jeff --"this is like a dream!" "this is so cool!" 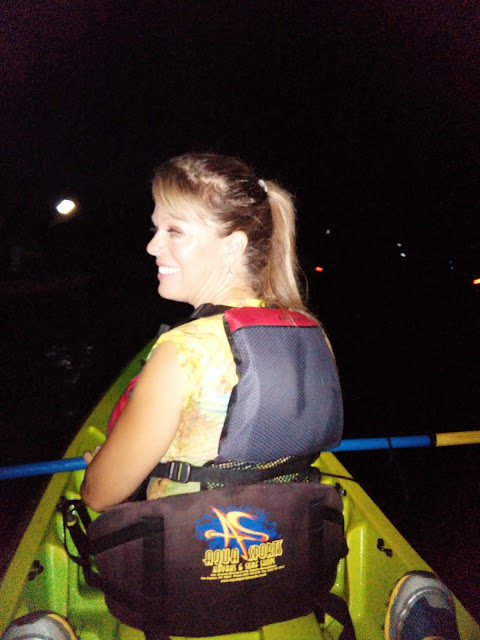 I was in front, and did my thing steering and paddling, and Jeff sat in the back and probably fixed all of the mistakes I made. We worked well together. Some of the other people around us were hilarious! There were couples yelling "left!" "right!" "left!" to stay in sync, the couple in front of us was like a pinball hitting one bank and then swerving over to the other bank. The man kept saying to the lady "why are you going over there??!!" "there is nothing to see over there!" Oh my gosh. They were so funny. We finally passed them, probably without them realizing it. 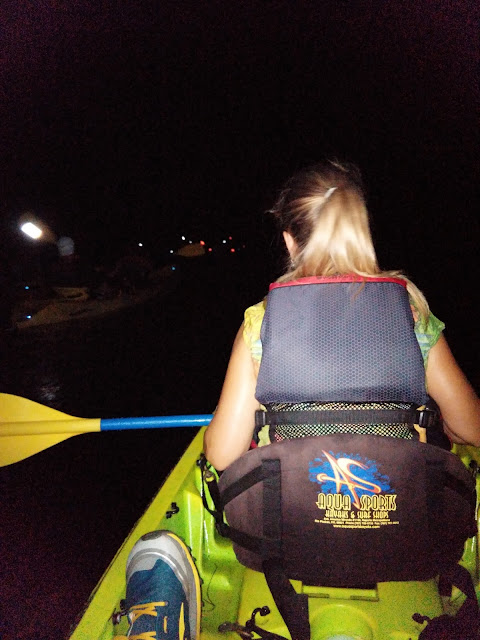 We finally came out of the river part into the bay, and the guide got us together to talk to us about the dinoflagellates some of which have bioluminescence. Then he told us to reach one hand into the water as deep as we could, then to move it around quickly. I gasped. It was so cool! Little sparks were in the water all around my fingers. It was like hundreds of Tinkerball fairies --magical.  We paddled along, and where our paddles entered the water, a cloud of light was created, then floated back behind us. Lovely. 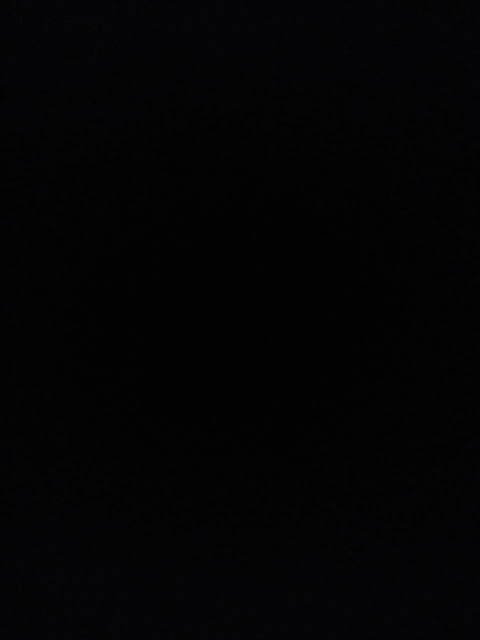 Jeff took some pictures. What do you think of this one? 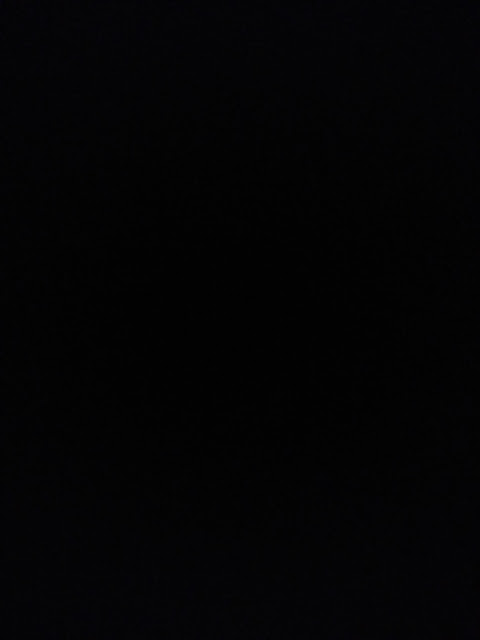 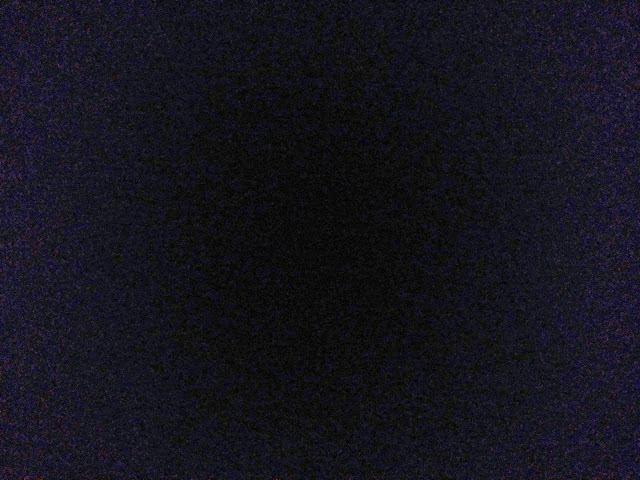 This one I edited like crazy to pick up any light. Still nothing :)  We really need to get a good camera.

I went online to try to find some sort of picture to give you an idea of what it looked like, but it really wasn't bluish like this, it was more bright yellow. The glow wasn't blurry like this either, it looked more like the white sparkles on the top of the water, except deeper. Eh, this isn't much like it anyway.

(This photo of Bioluminescent Bay is courtesy of TripAdvisor)

We paddled back up the river, slowed by traffic jams of pinball kayaks, and one full size boat coming the other way. We kept talking about how much we wanted the kids to see this. Someday I hope we bring them back.
Tweet
Posted by Amara at 9:54 AM

I would love to see this. Maybe we'll hitch on to your trip when you take the kids.

We found something in the bay this summer. We were shining our flashlight, it would flash/wink back. It seemed bioluminessence ish. Ghost shrimp maybe? So it's always there? Is the bay/area sick? Isnt it an unhealthy overpopulation when it happens here?

We found something in the bay this summer. We were shining our flashlight, it would flash/wink back. It seemed bioluminessence ish. Ghost shrimp maybe? So it's always there? Is the bay/area sick? Isnt it an unhealthy overpopulation when it happens here?

I would like that. I think Japan has some area similar, I'll have to find out.