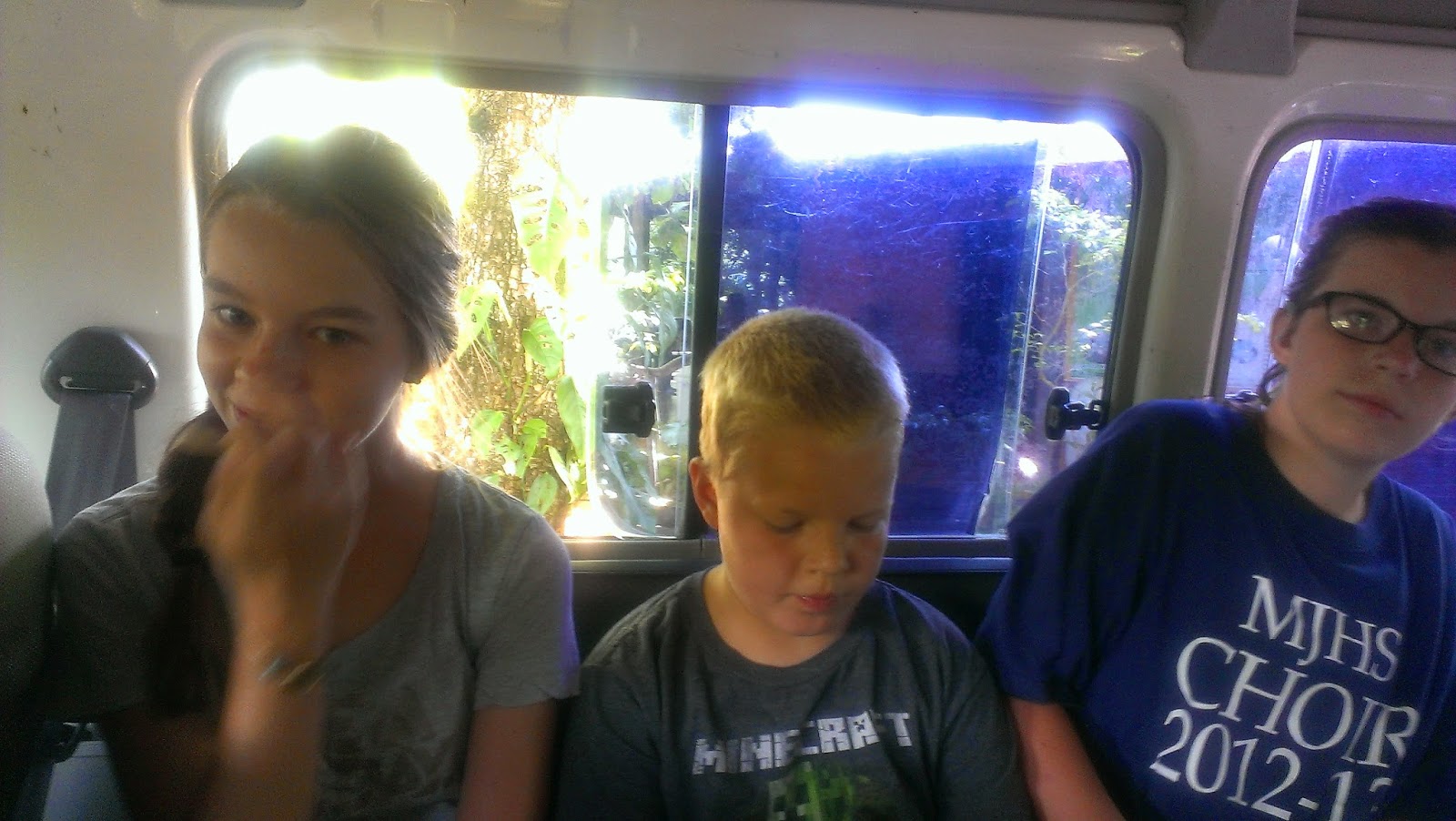 After zip lining, our guide took us to the top of the Mombacho crater for a hike through the cloud forest. This is a tropical, high altitude forest, and is consistently moist and green. It was gorgeous. This was what I was hoping all of Nicaragua was like. To get there, we took a modified jeep up a steep (to put it mildly - I was wondering if the vehicles ever tipped over backwards on the way up!)paver/cobblestone road. We had to have a park ranger drive us that was experienced with the driving as they had had accidents in the past. That is one other cool thing about Nicaragua: they have a great National Park system with park rangers, tours, litter control, restrooms, etc. --very professional and nice.
﻿ 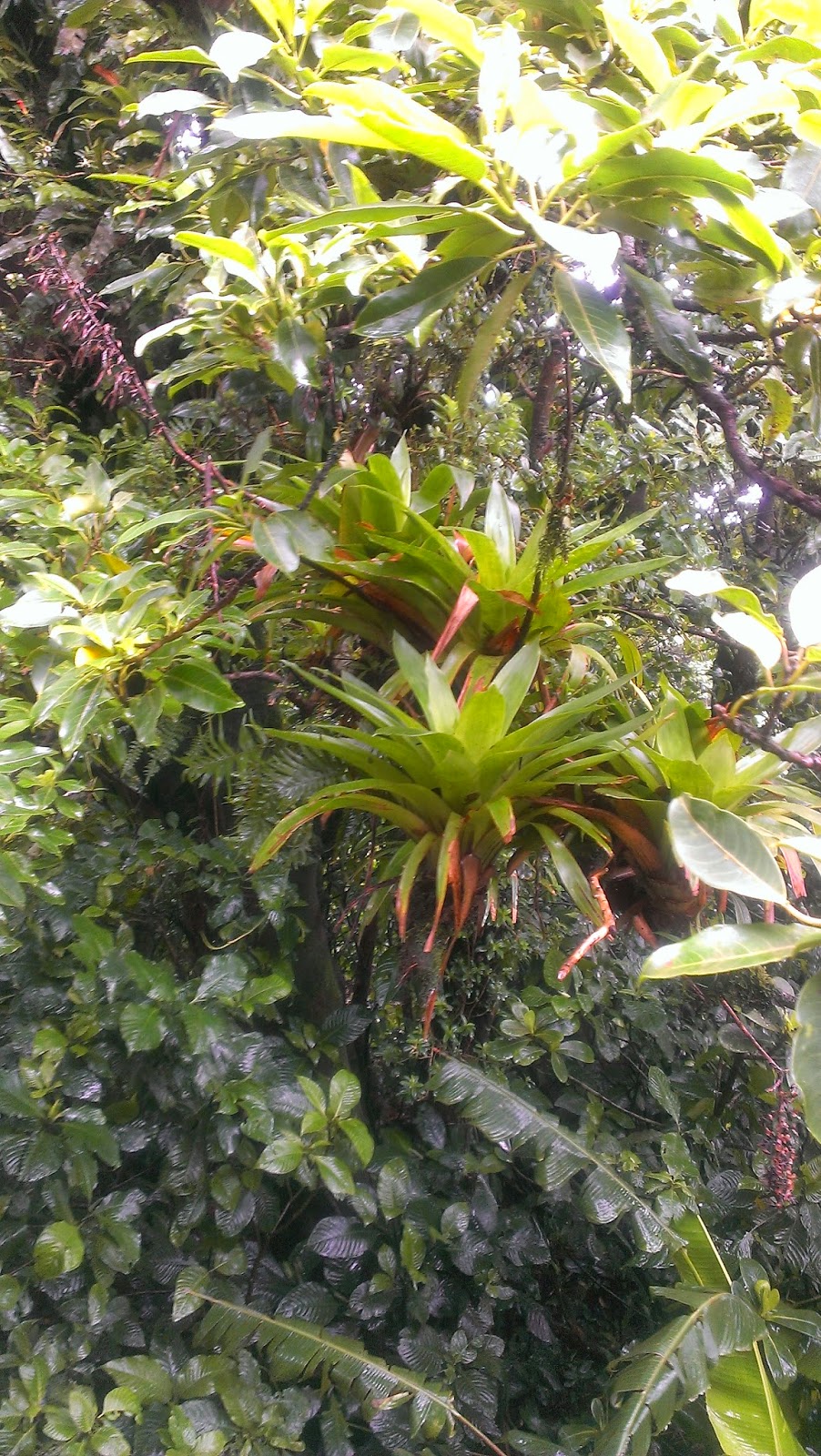 Meesha -you would love all of the bromeliads. So beautiful. I will tell you right now, this post has just a fraction of all of the pictures I took. I kept getting struck with a huge tree all covered in epiphytes, or a view of the crater. 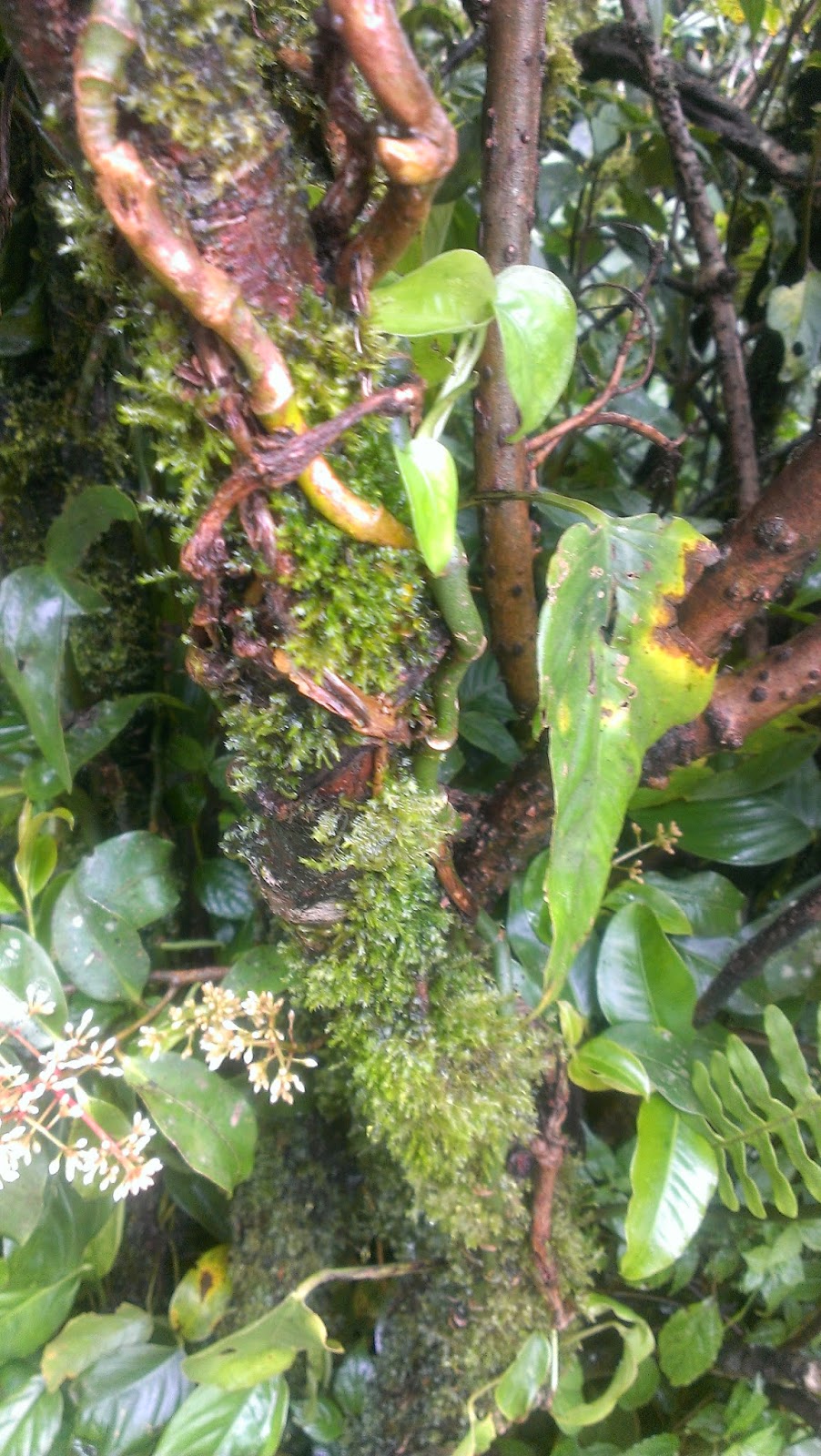 Here I tried to get a close up of a tree trunk. See how it is covered in moss, and being strangled by a vine, and has ferns and things growing out of it?﻿ 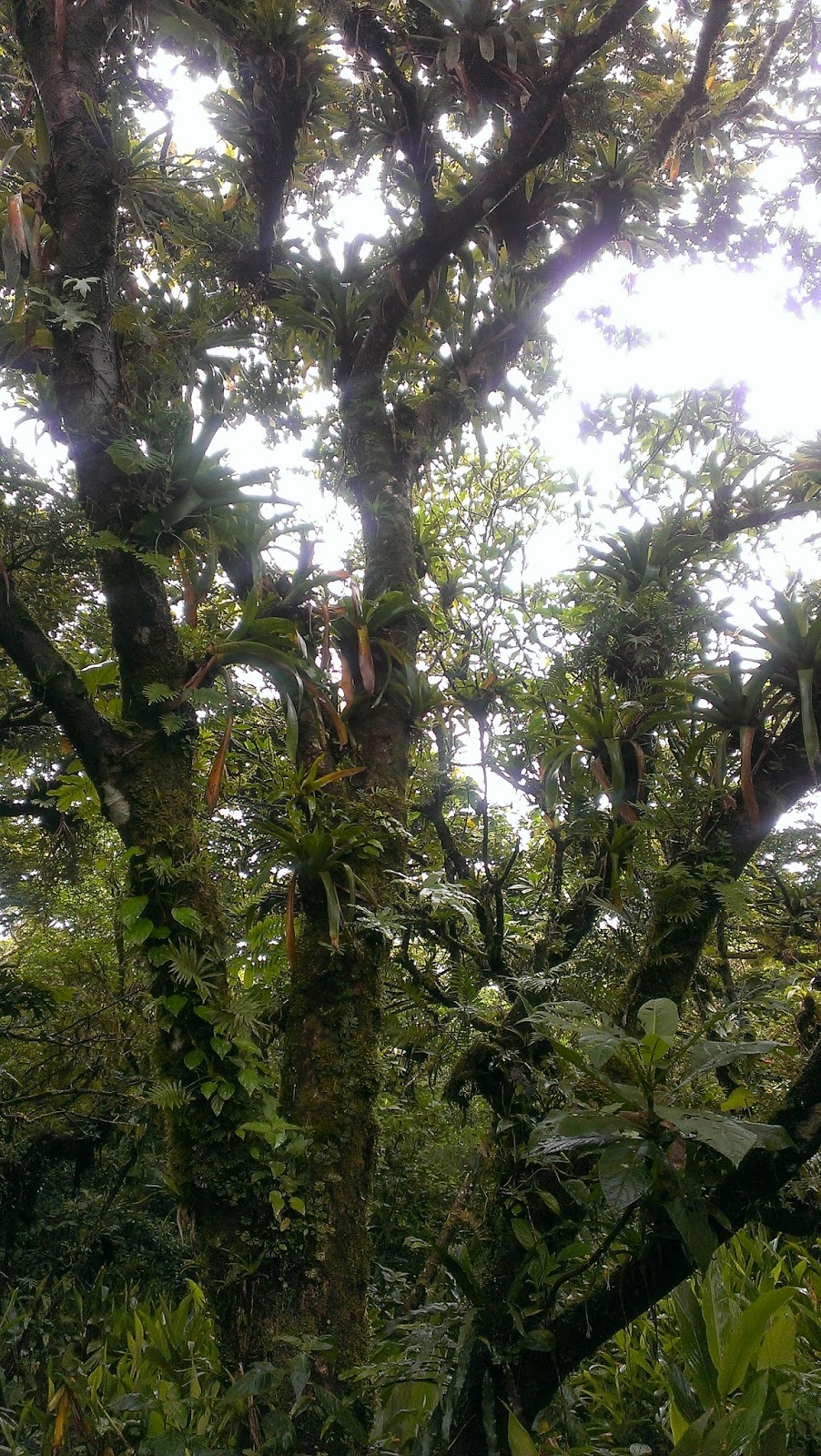 Backing up, you can see the many different plants growing on a tree trunk and branches. At one point our guide stopped us and pointed out a particular tree that scientists had counted 35 species growing on.
﻿ 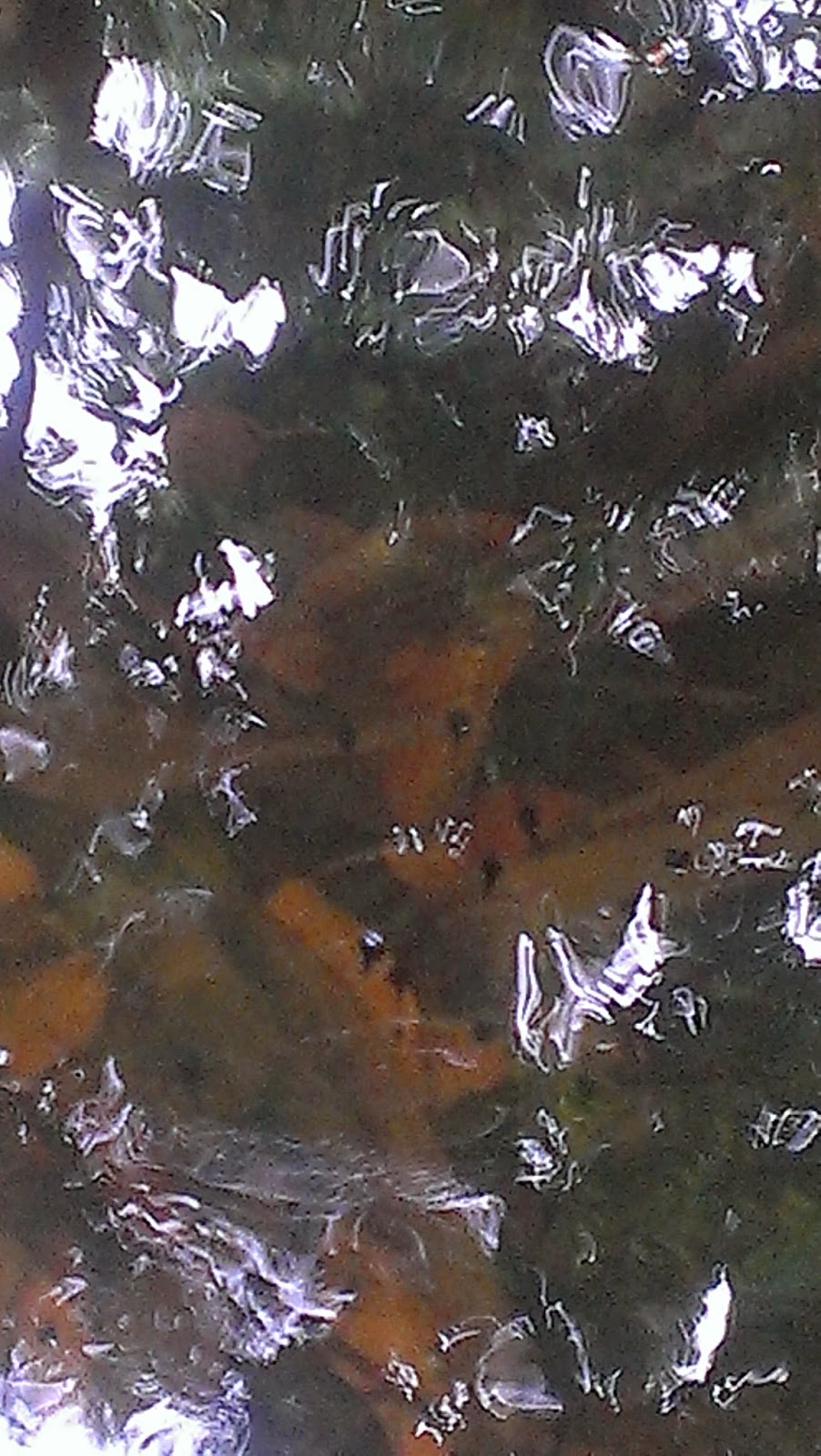 Near the start of the trail, our guide stopped to look for red eyed tree frogs, as he had found them at that point in the past. We didn't see any adults, but saw tadpoles in a small pool,﻿ 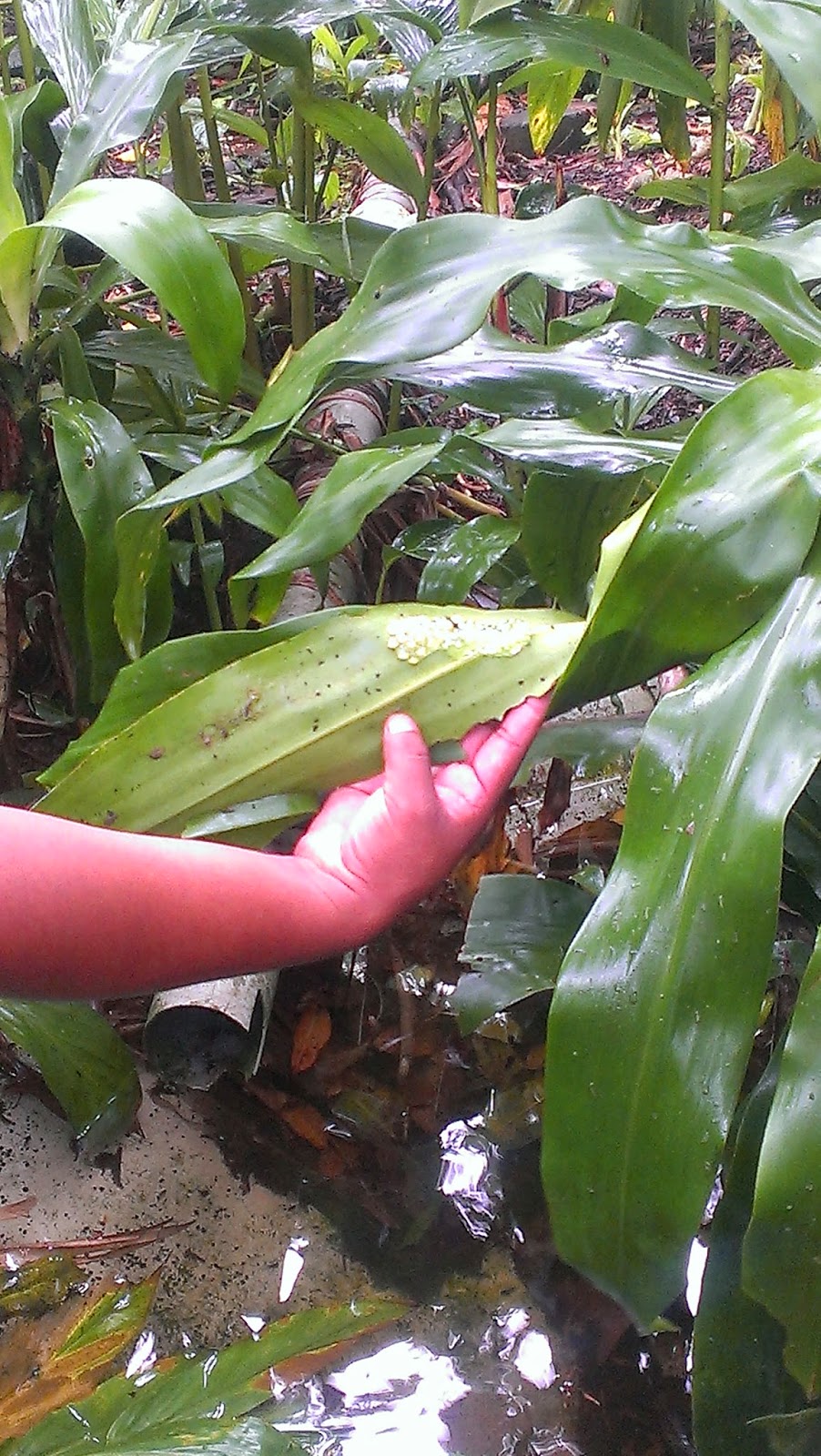 and eggs laid on the underside of a leaf. If you looked up close you could see the little frog babies moving inside the clear, jelly eggs. Maybe gross to some, but fascinating to us.﻿ 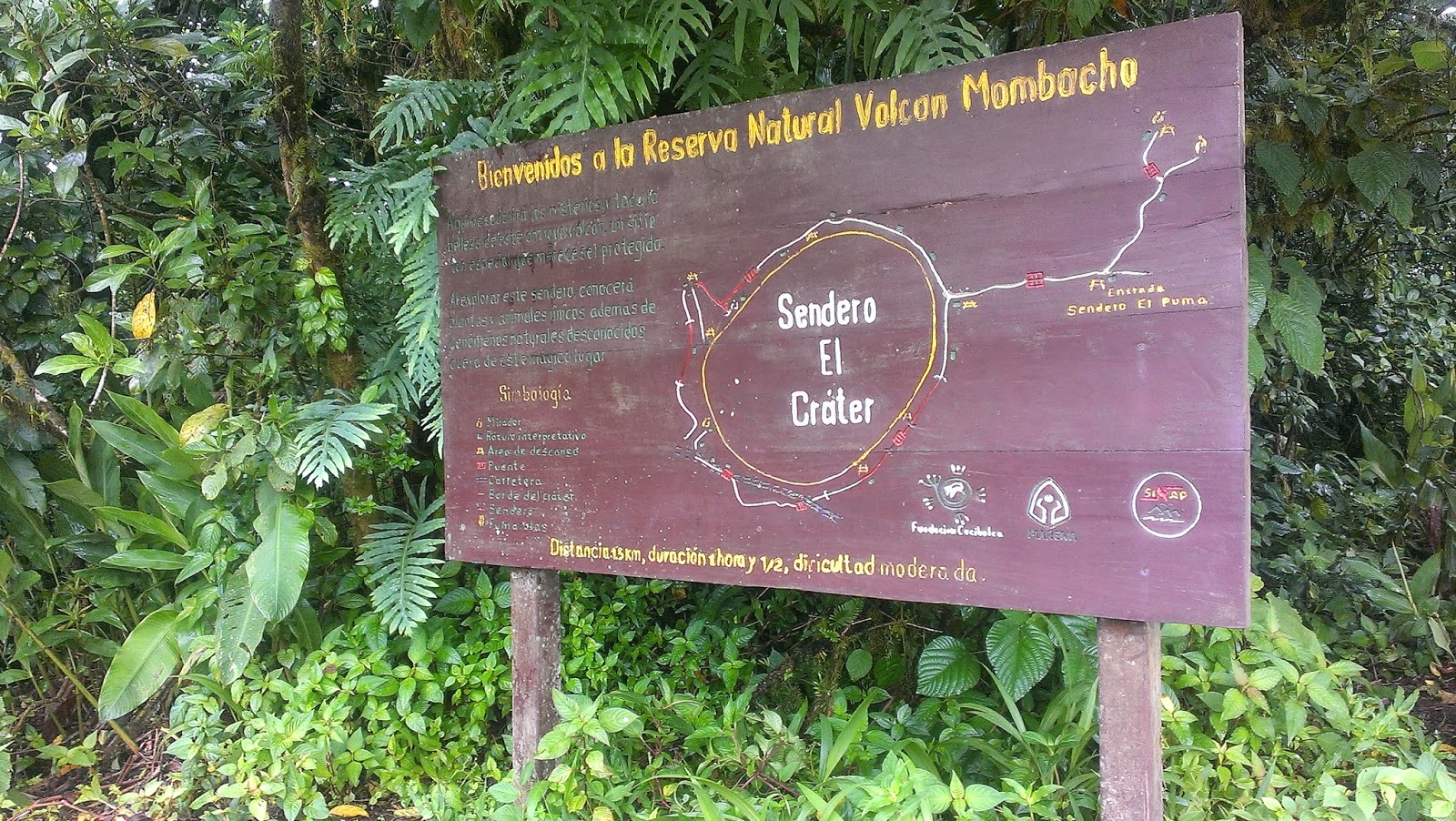 This is the trail we took: right around the edge of the crater. This meant that a different points you got a viewpoint down inside, but for much of it the jungle was too dense to see through. ﻿ This was the first viewpoint. When we got there, there was no view! Cloud covered the crater area. But..﻿ 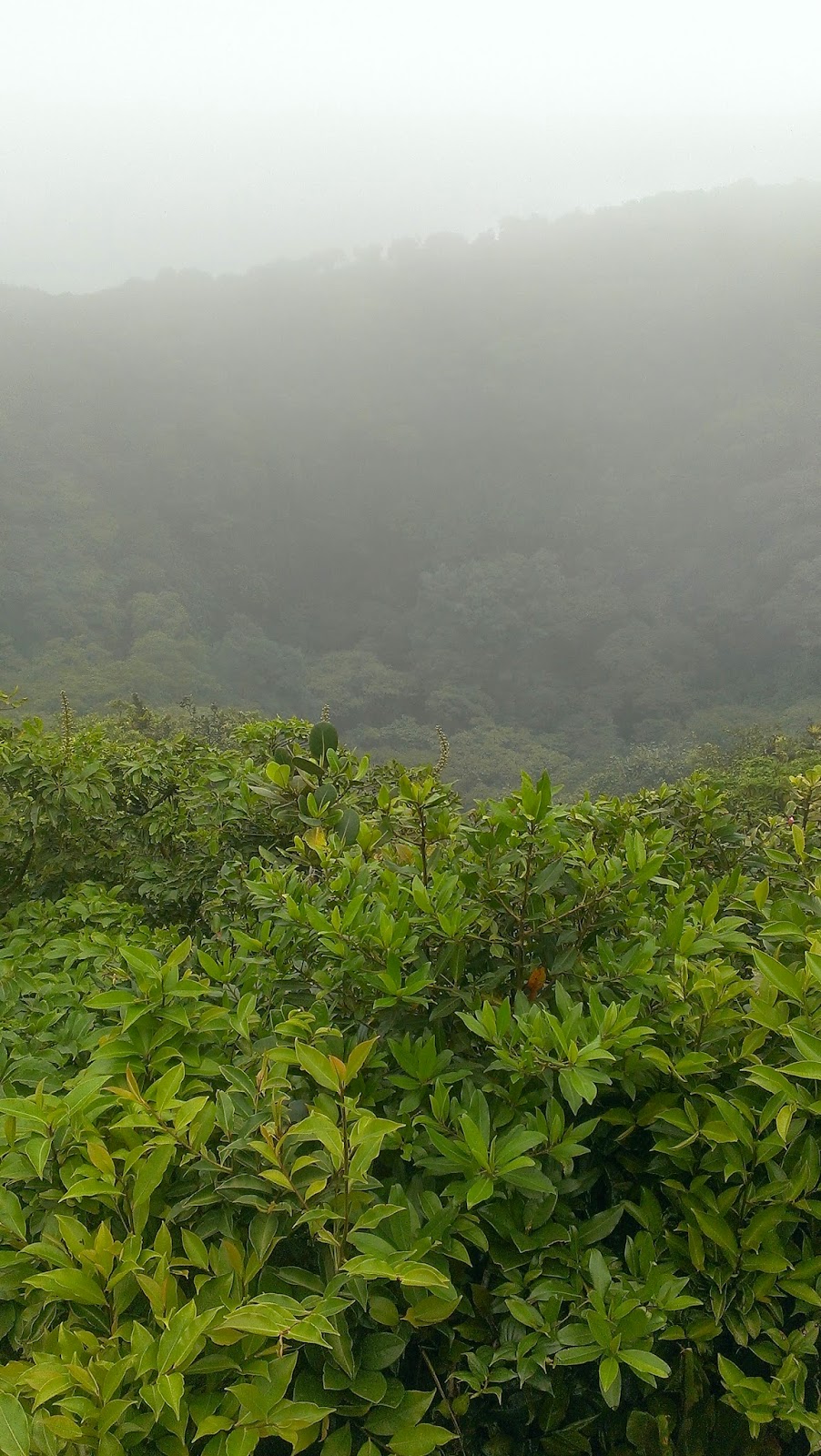 Within minutes it started to blow away..﻿ 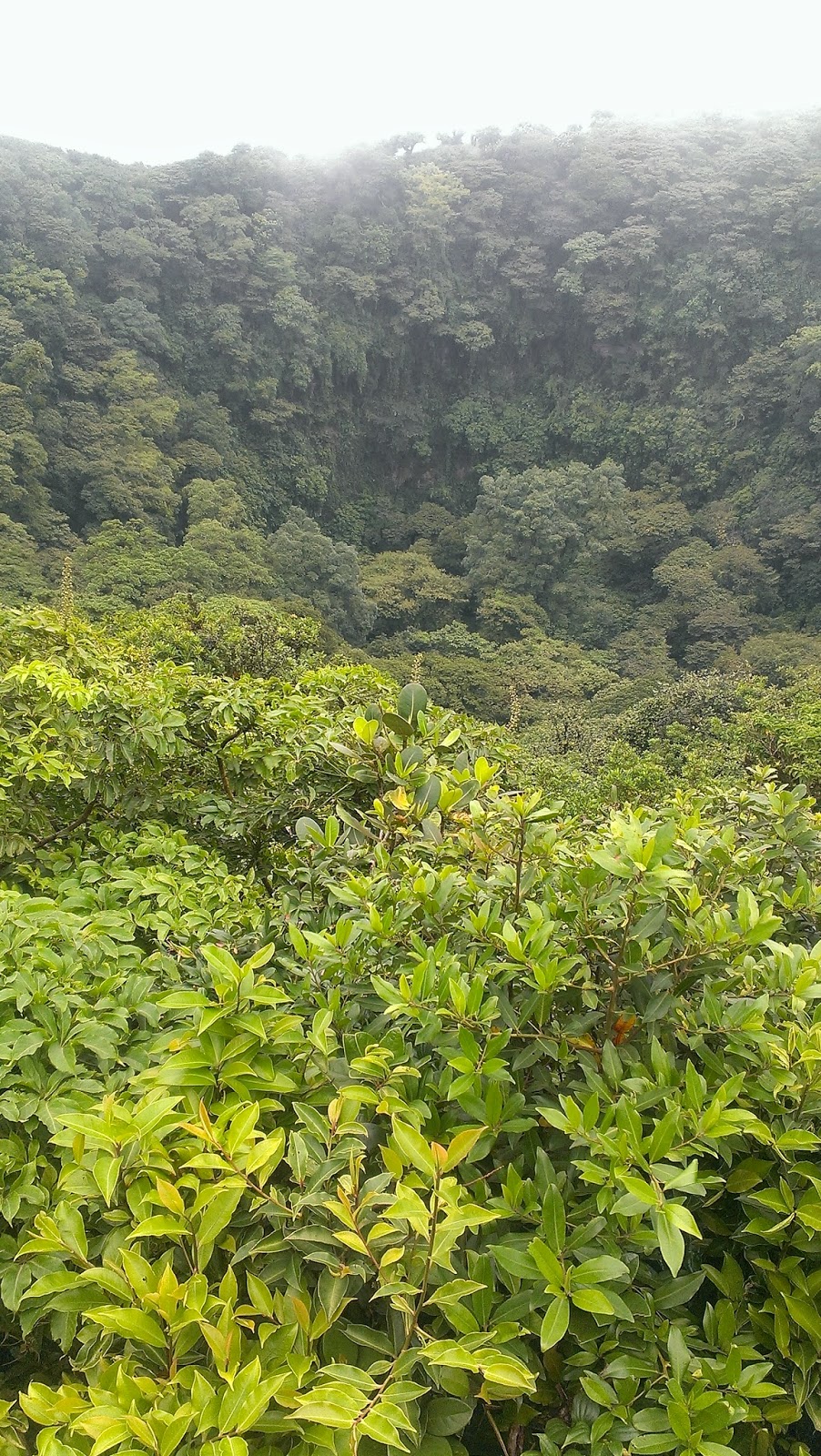 leaving a perspective of the giant hole covered in trees, plants, and vines.
﻿ 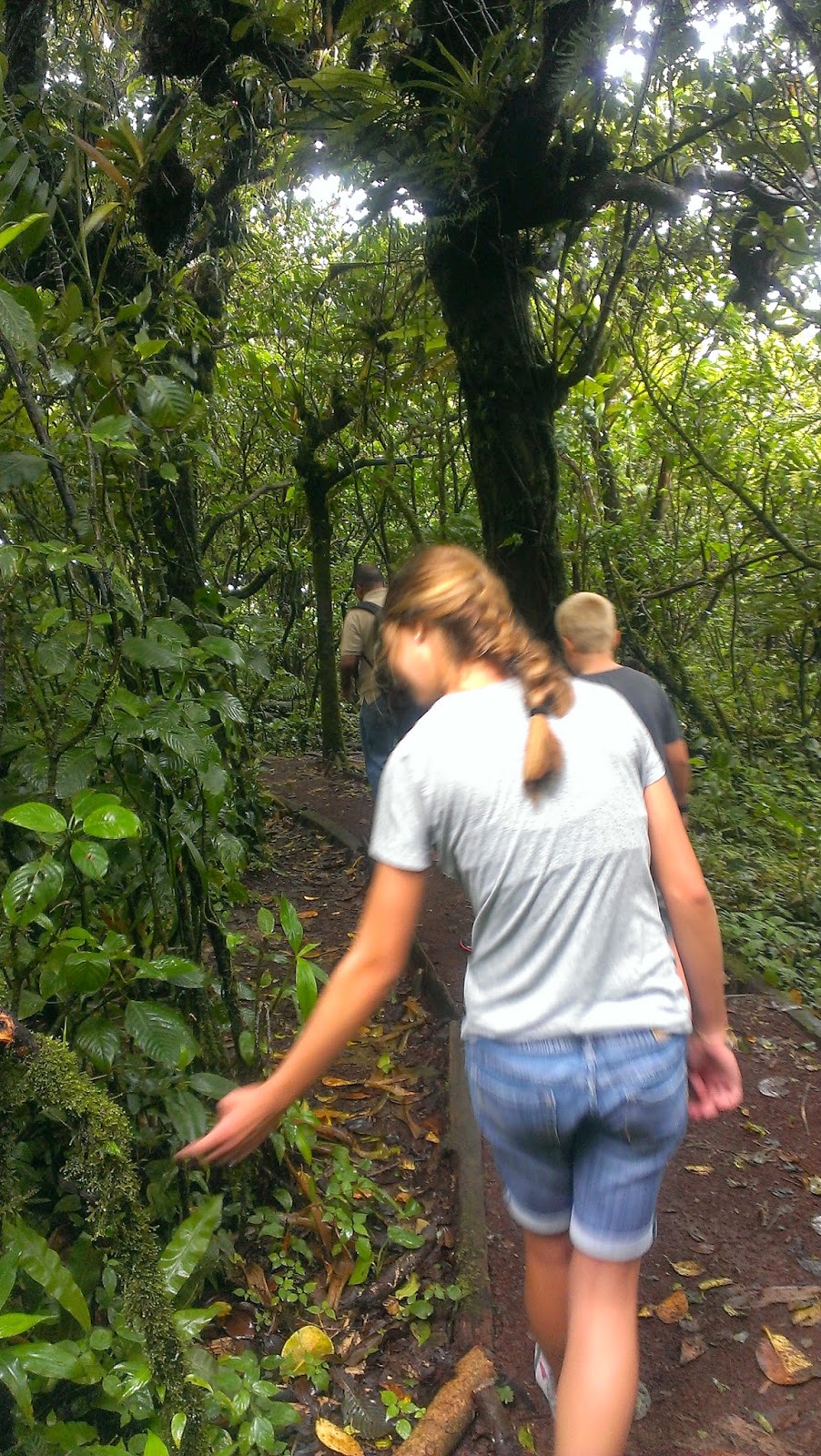 Me and Tia said multiple times that it was like Disneyland --only better. You could see they were trying to imitate this kind of thing on the Indiana Jones ride, the jungle cruise, etc., but Disney's was a poor imitation of the real thing.
﻿ 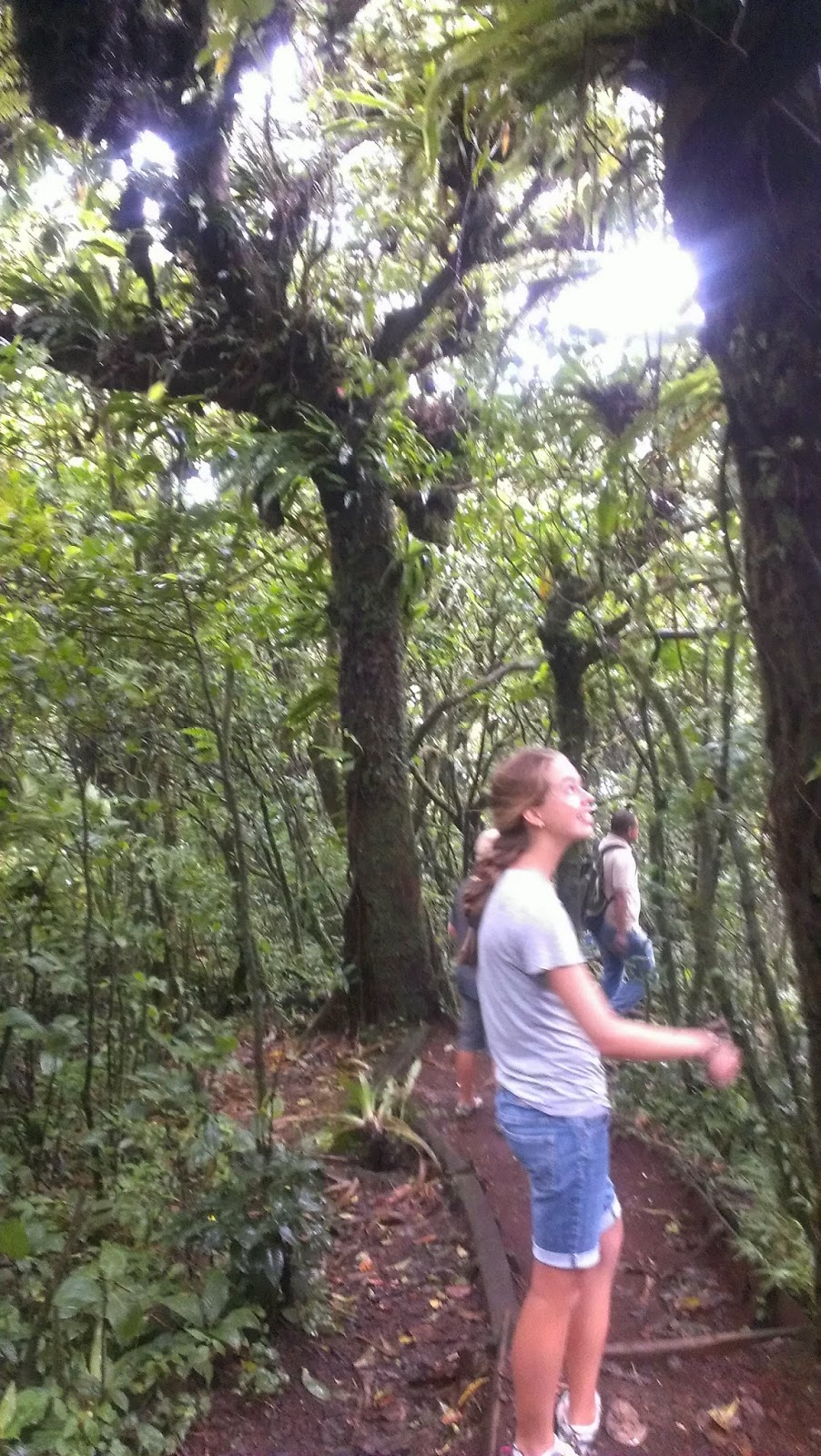 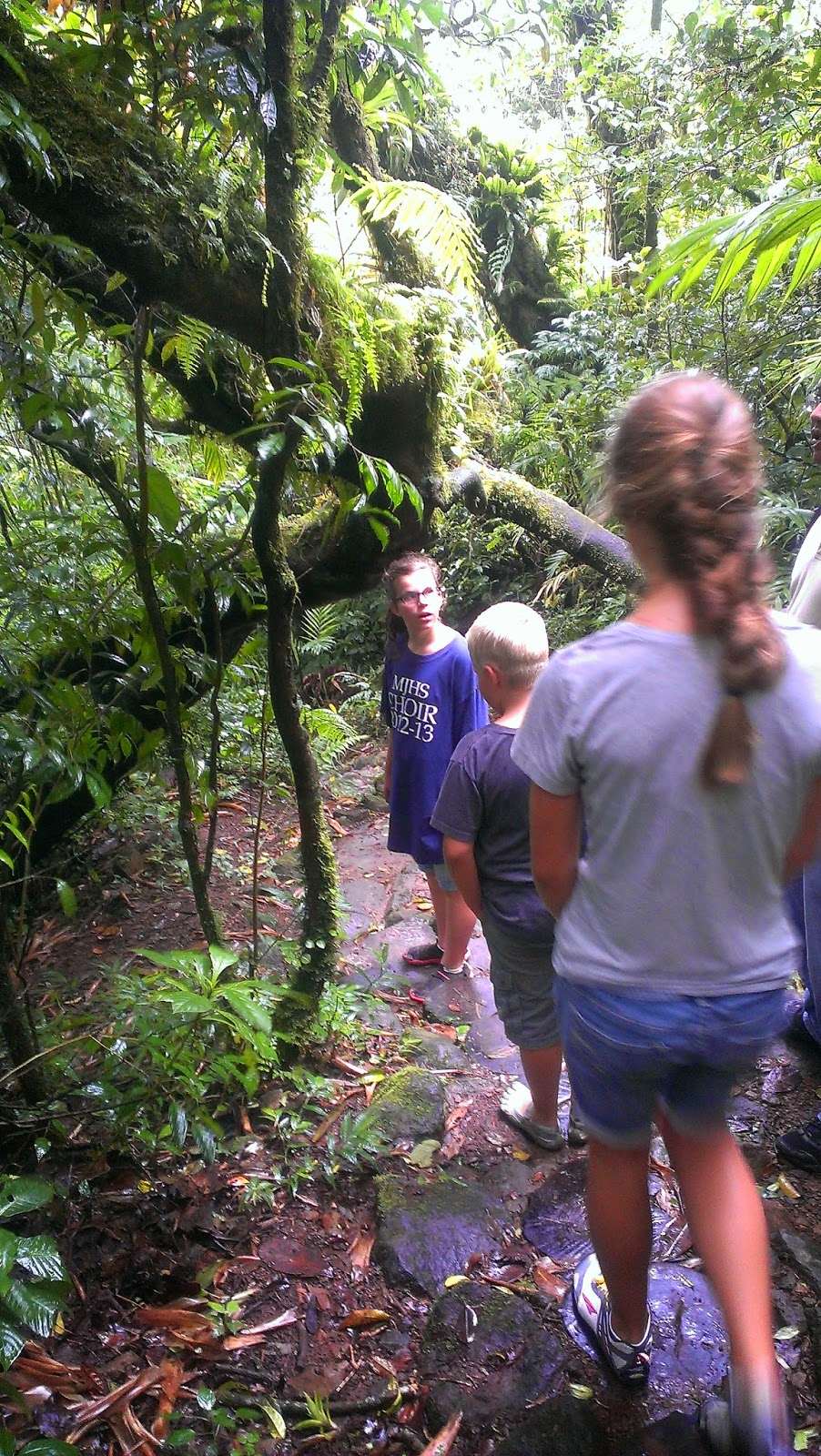 Along the way our guide told us...stuff, but I'm not remembering most of it!﻿ 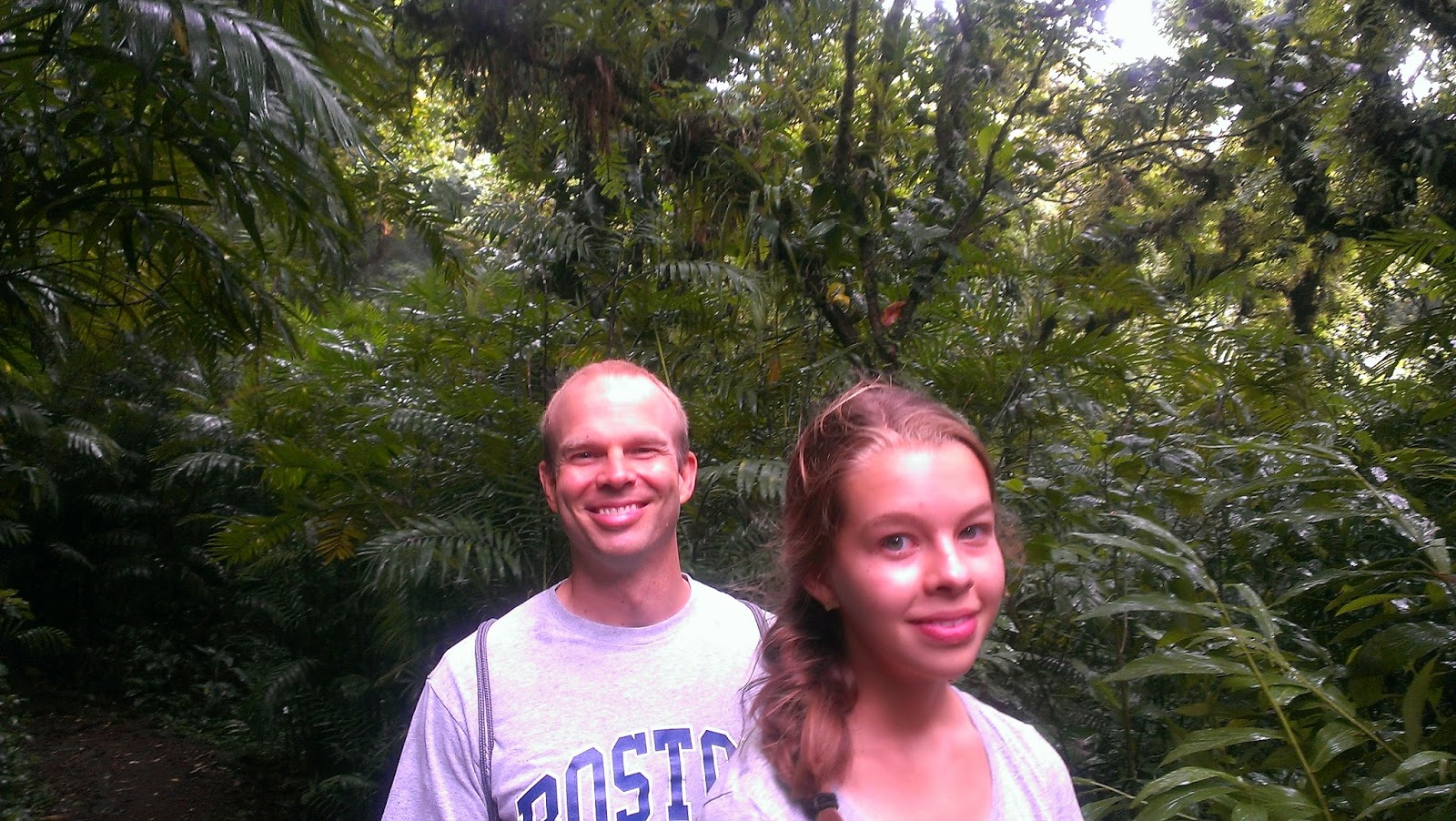 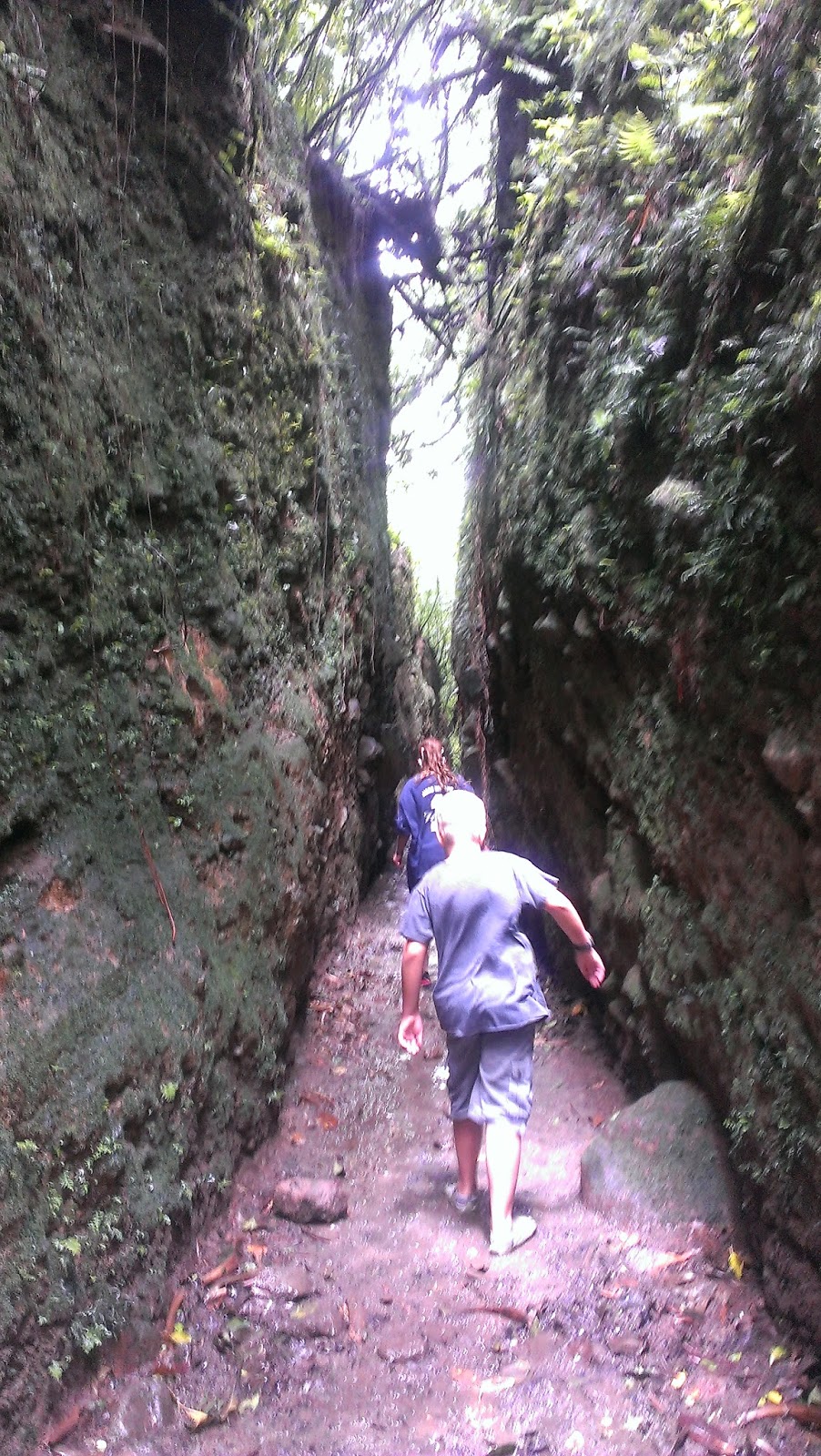 This was a fault area created during the explosion of the volcano. It made a tunnel-like path for a couple hundred yards. Pretty neat.﻿ 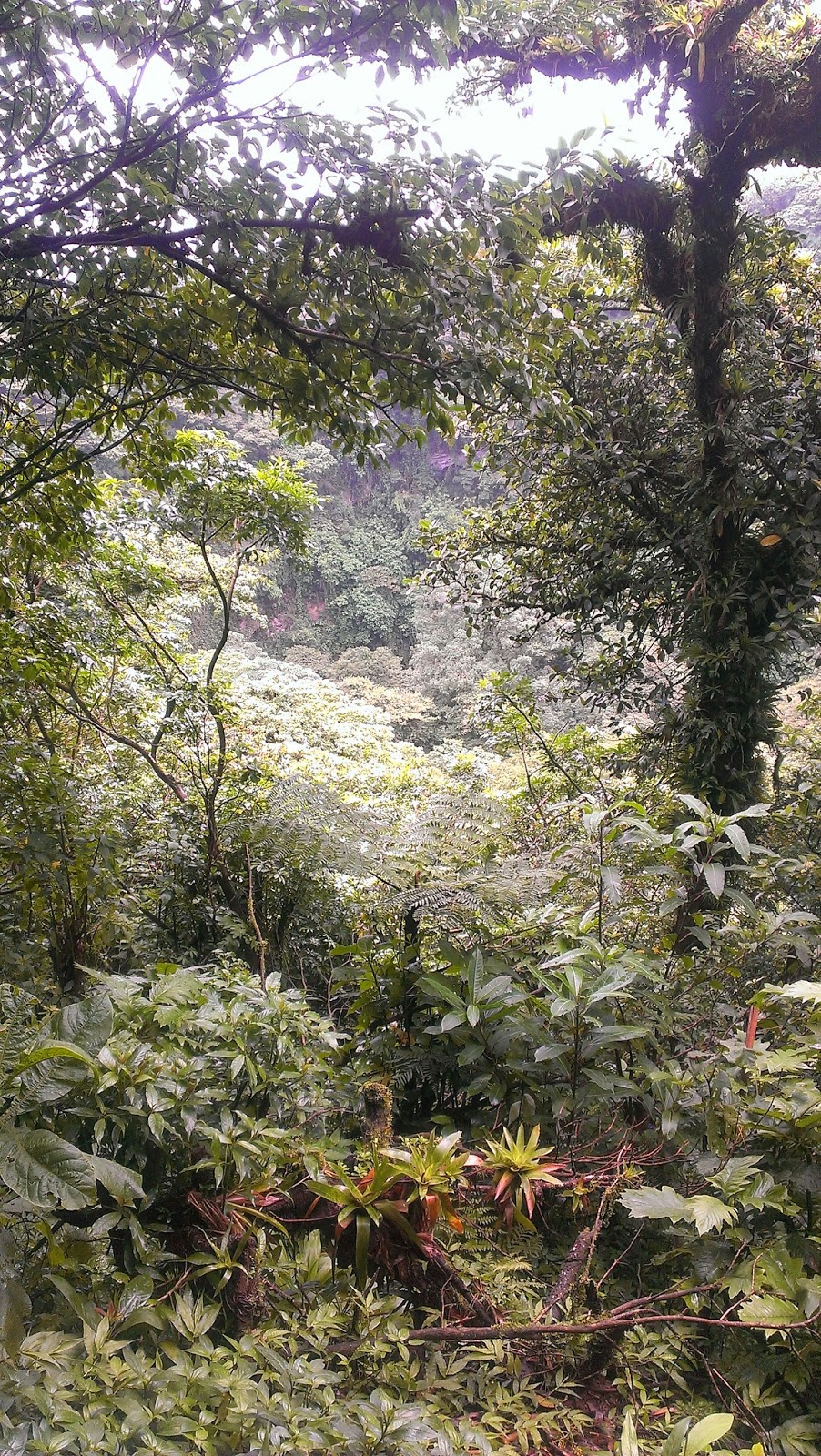 Another view of the crater.﻿ 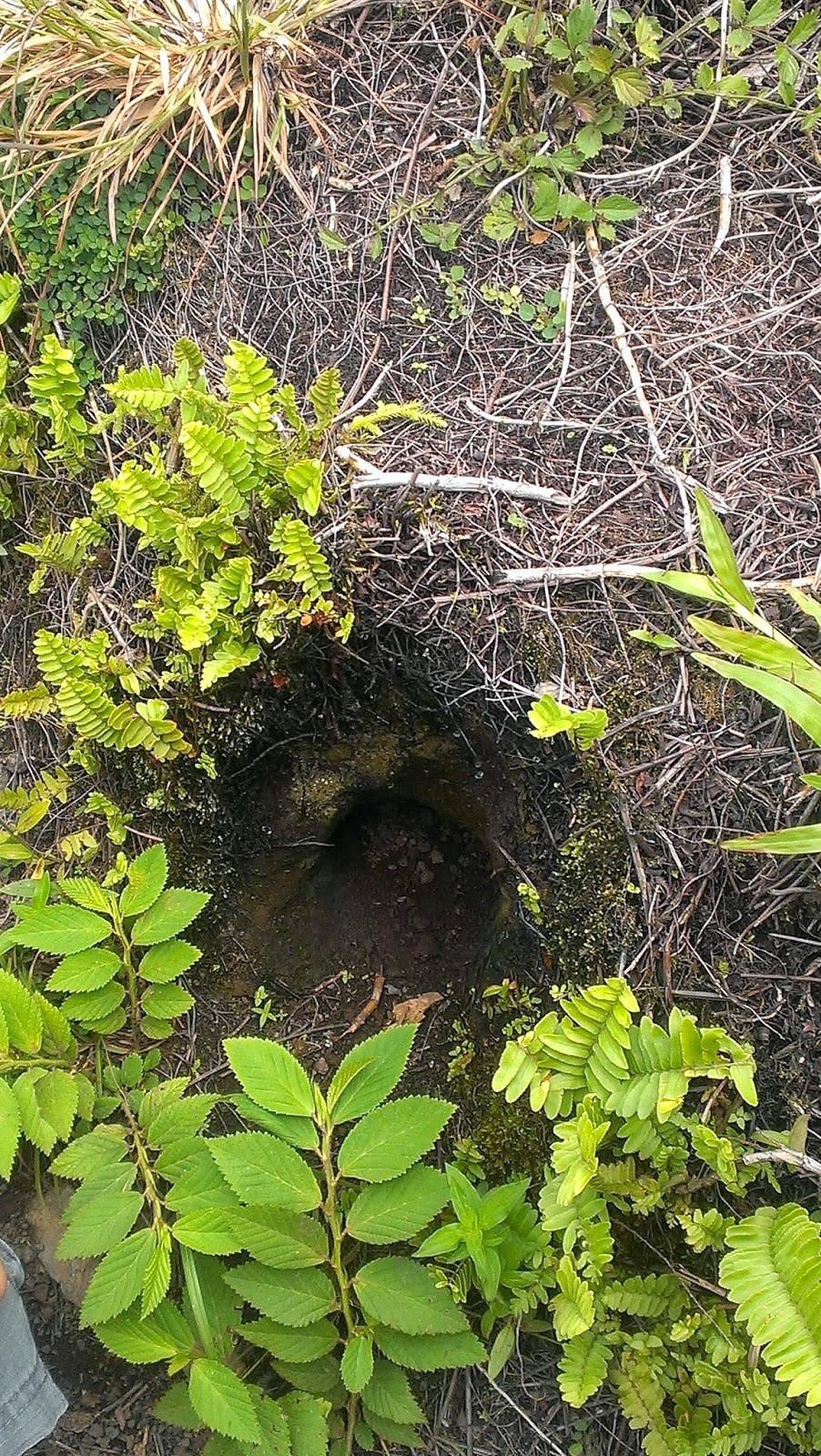 I mentioned earlier that although this was considered an inactive volcano, there were some vents and things still releasing pressure. These are called fumarolas. If you put your hand down this little hole, you could feel the heat and steam. You could see steam just looking at it...except when I shot the picture.﻿ 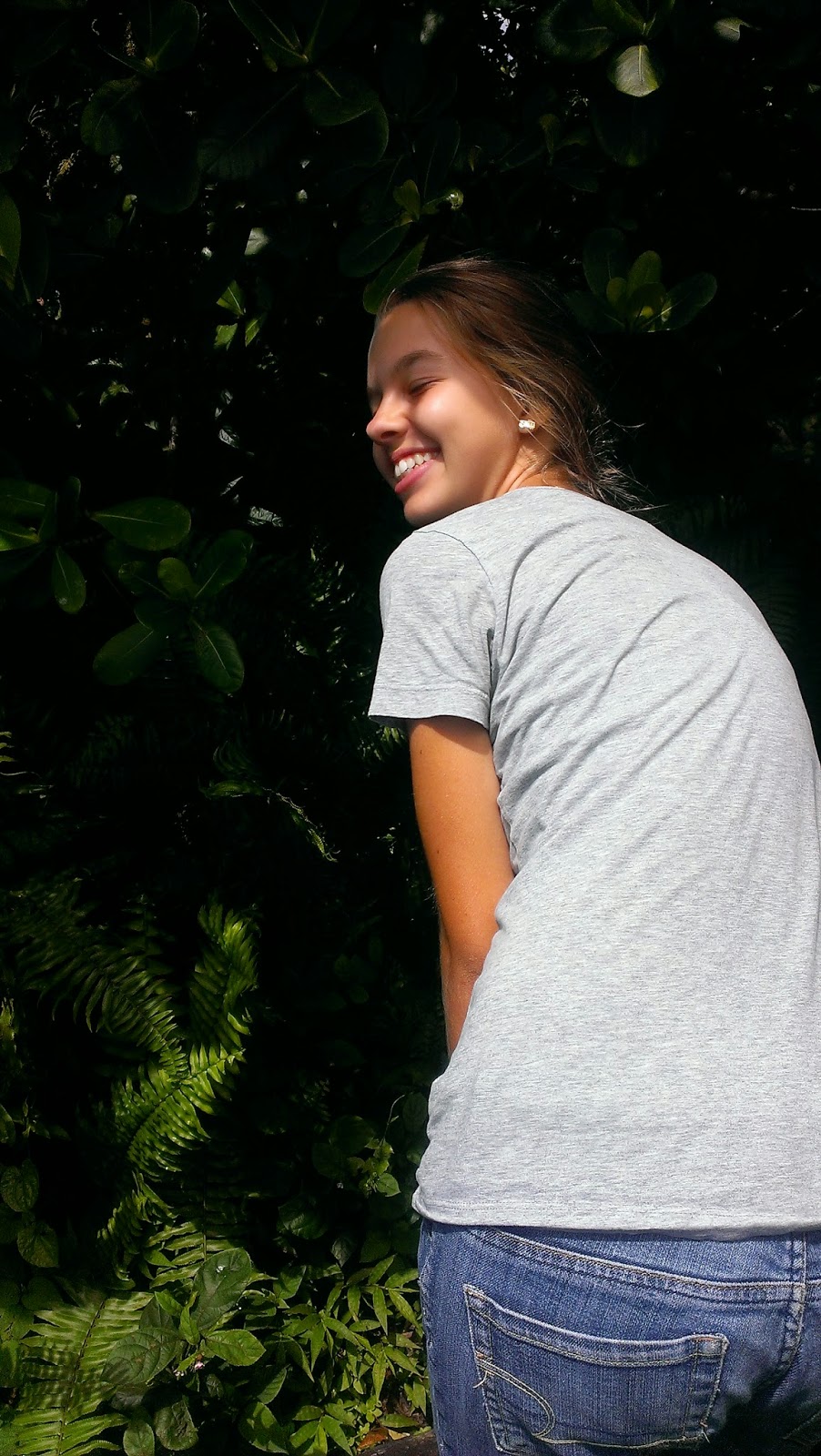 This is Tia leaning over another vent, hard to see it since it's just a black hole thing. 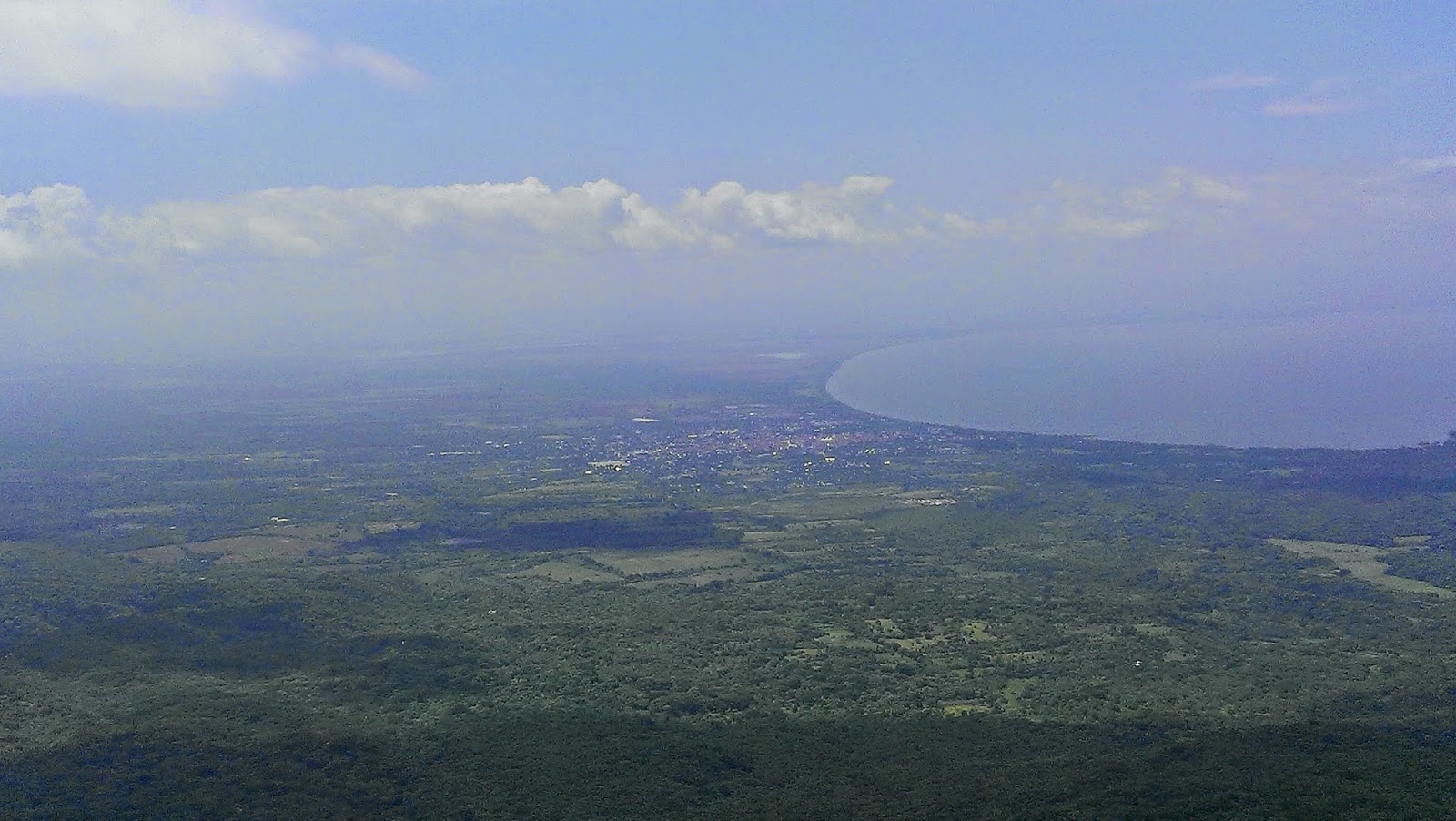 Near the fumarolas, you could see this beautiful view of Granada on the edge of Lake Nicaragua.
﻿ 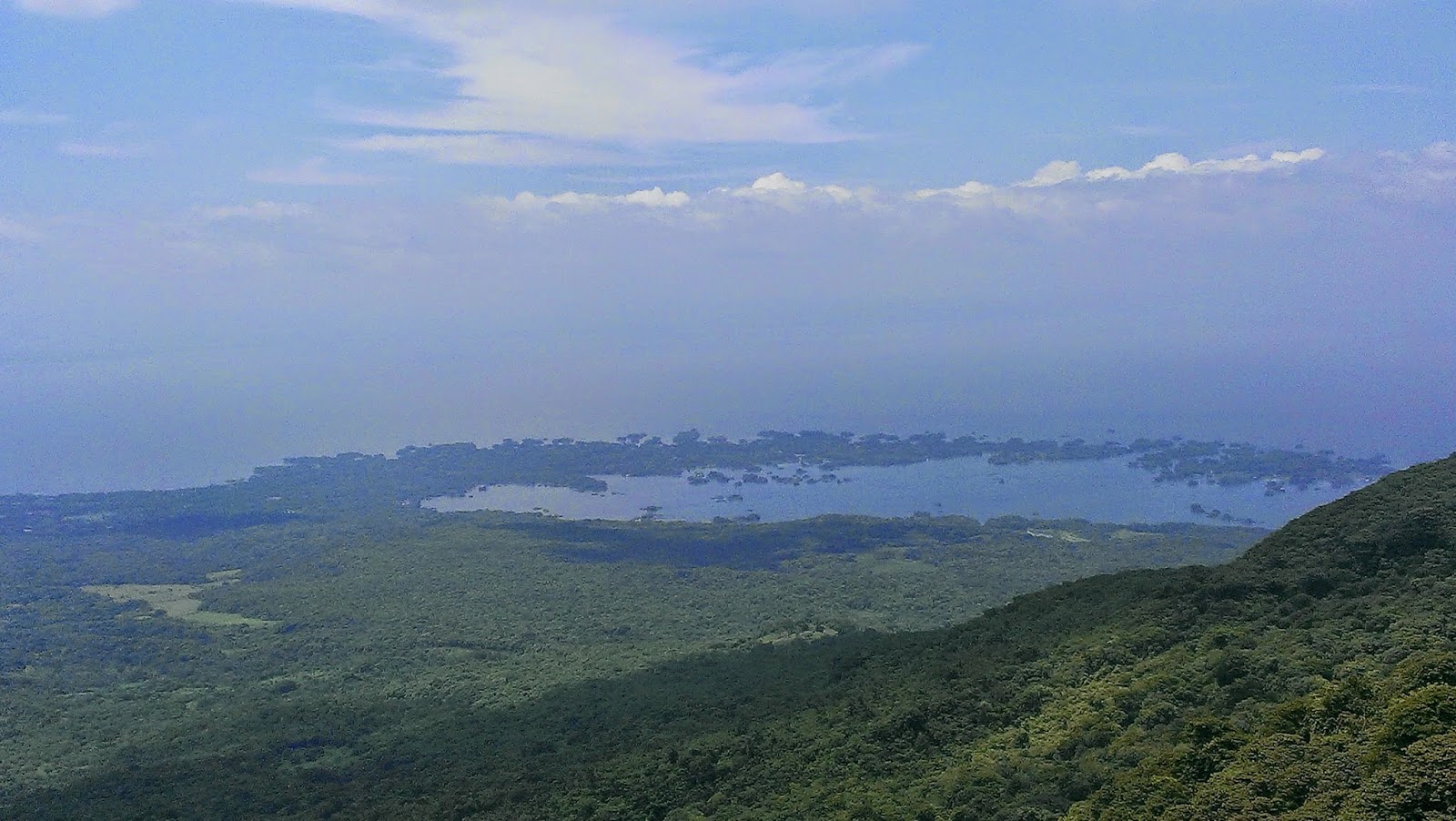 These are some of the many little islands in Lake Nicaragua (later we went on a kayak tour of them), called "daughters of Mombacho". When this volcano blew, it spouted lava and rock for miles, some of it into the lake, which became this chain of "isletas". 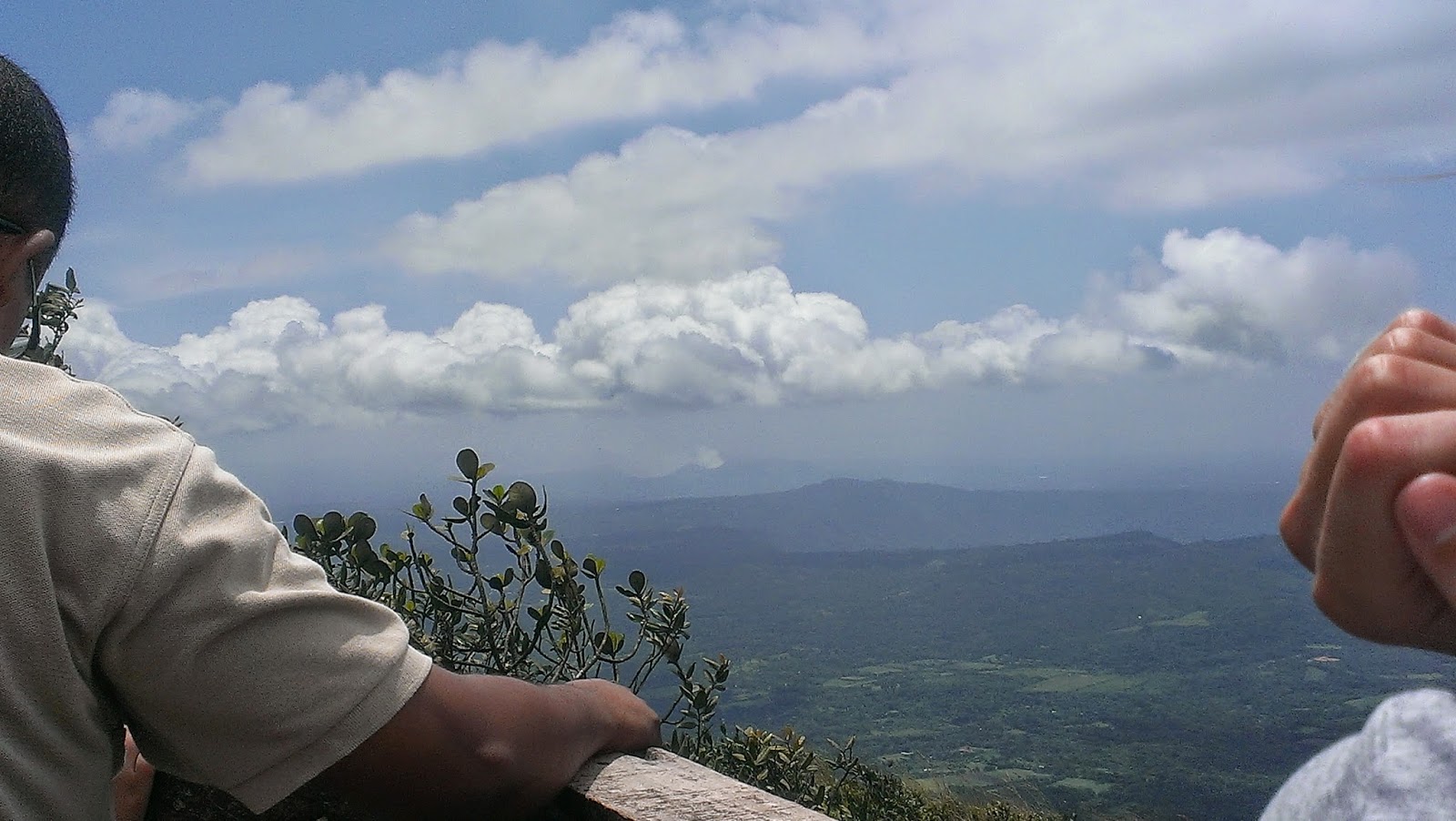 Looking in the other direction you can see the still active volcano Masaya. It's a ways out here, but do you see the plume of smoke?﻿ 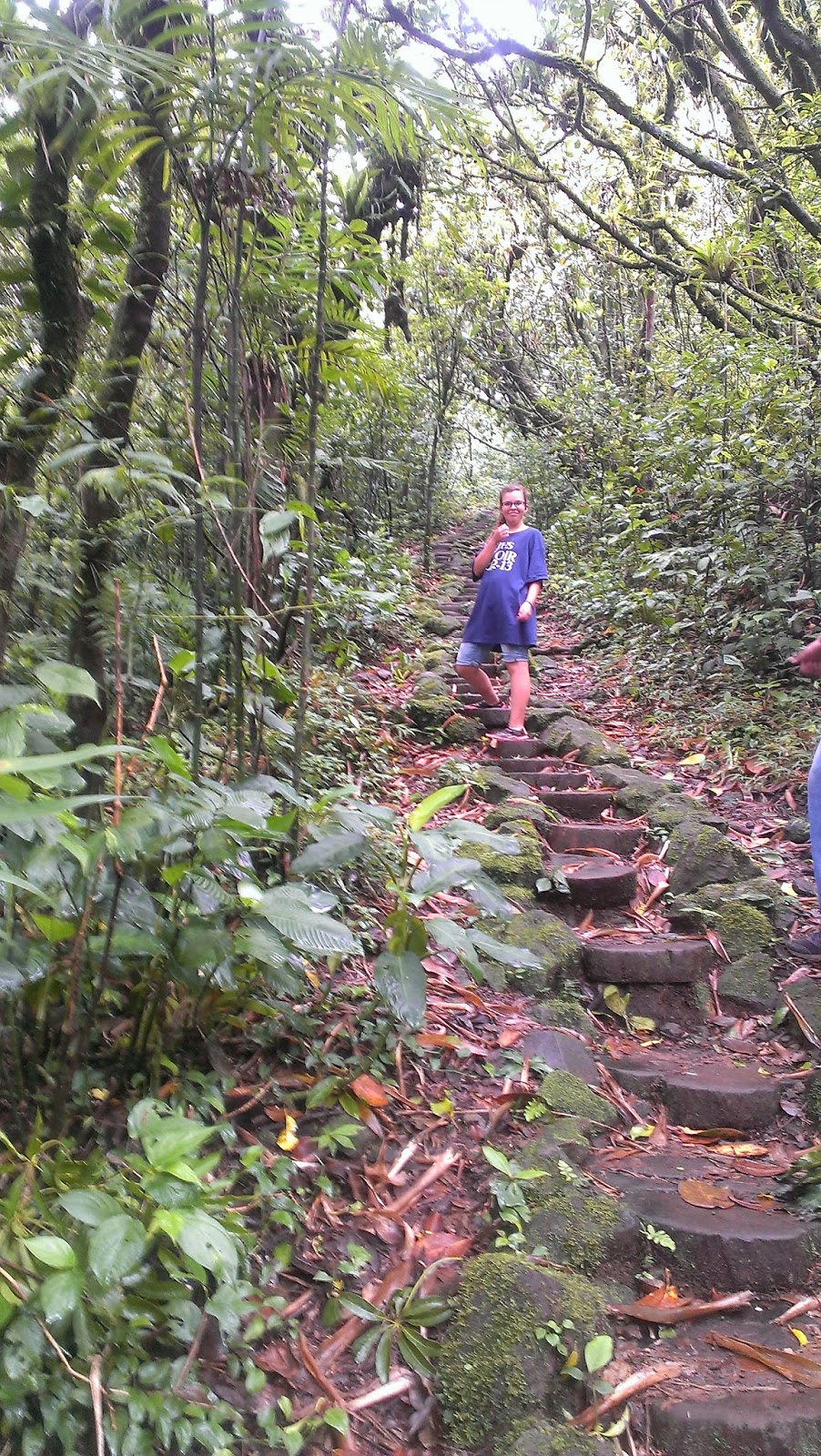 Much of the trail is created from slices of logs. I guess when that's what's so abundant, that's what you use. I told our guide that in Utah we have...rocks. So our trails are made of those!
﻿ 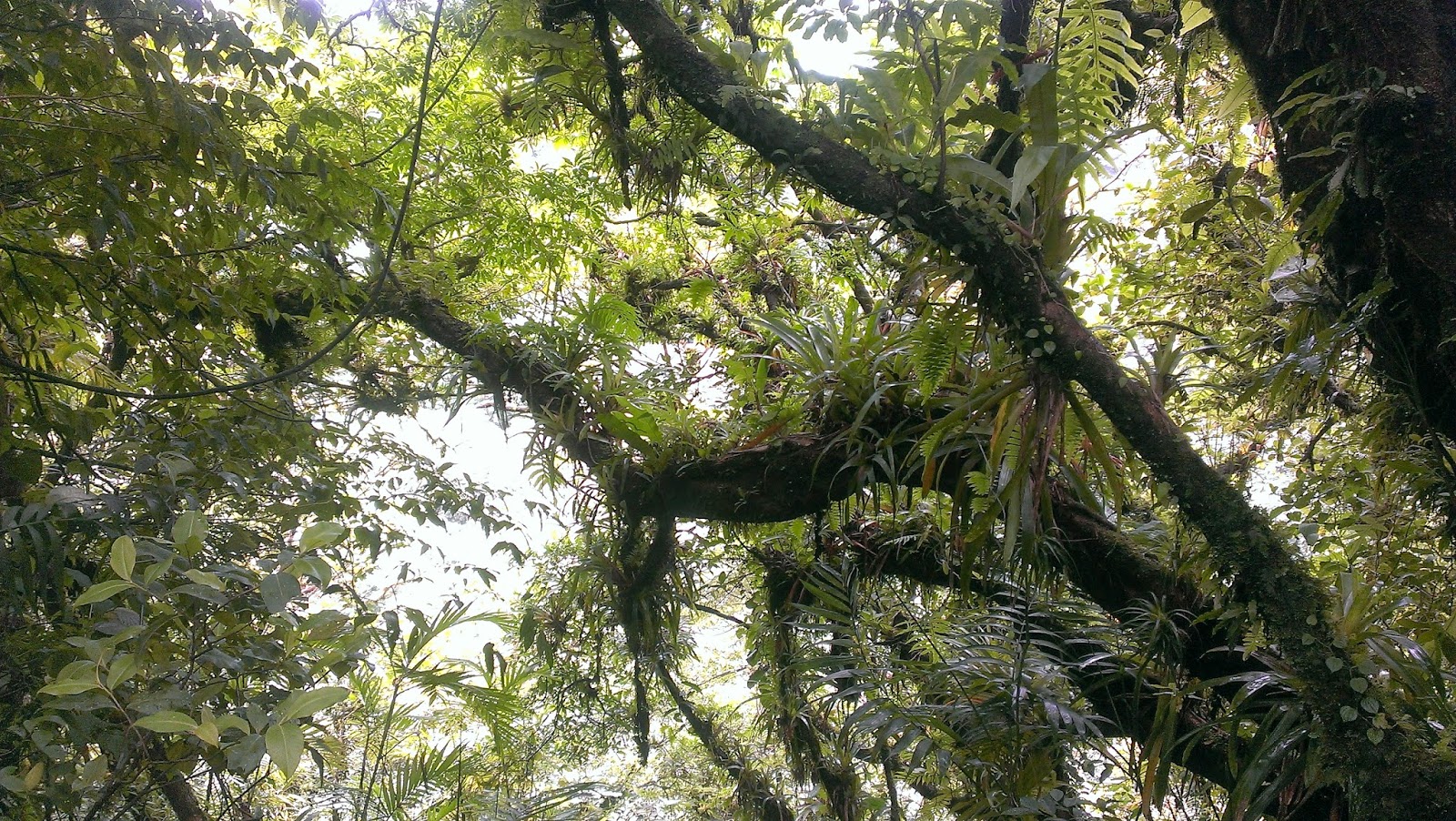 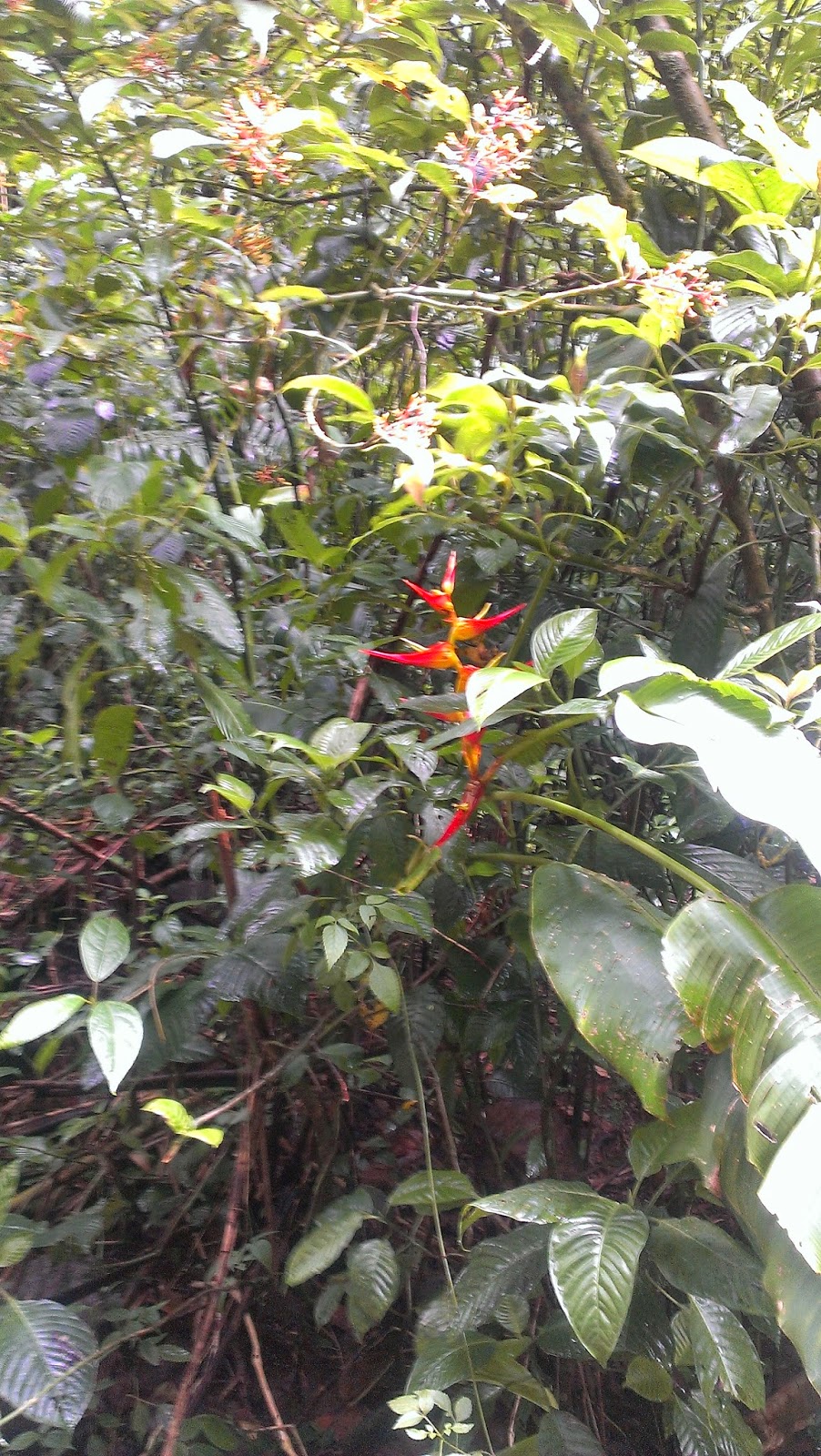 So many species of plants and trees I couldn't keep up, but I did remember this variation on bird of paradise -heliconia. Where I spotted this ended up being a landmark. When we got back to the lodge area, another park ranger talked about seeing an "oso perezoso", or sloth, right near this flower. We all trooped back and stared up into the tree tops. Finally, Jeff, my color blind guy, spotted it. We should have been able to predict that! They say that colorblindness has survived in the gene pool because those men (it's usually men with the expressed gene) are better at spotting animals in the wild (for hunting anciently). I took picture after picture, but the animal didn't show up very well. In reality we could see it eating, and got to see its little smiling face, and arms, and the mane of lighter hair on the back of his head. Here's a short video where you can at least see movement!
﻿
Tweet
Posted by Amara at 10:01 AM

Labels: family, Nica, travel, why Jeff's better than I deserve

Wow, I would love to see a sloth, and all the plants. Looks so interesting.

What a beautiful place.

Okay, this is the stuff my dreams are made of. I'm so jealous.