Key West, and back to Miami 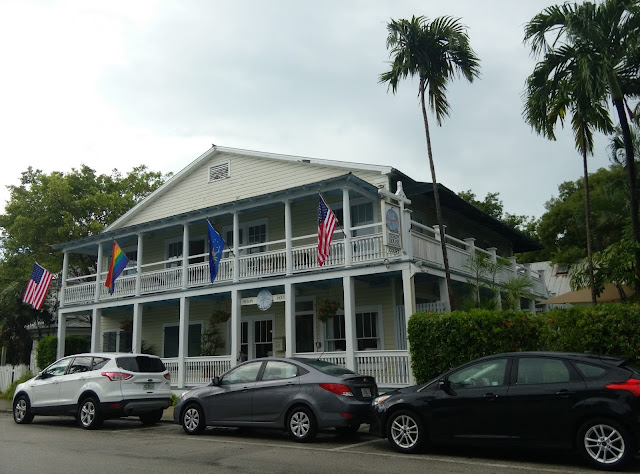 I had a hard time choosing a hotel in Key West. For some reason it was hard to tell what a place looked like from the pictures. I would get pretty set on a place, only to see later that there was a big problem with it. I loved the pictures of The Heron House Court. It was so cute, and I was able to get a room with a private bathroom (which is a dealbreaker otherwise for Jeff). We stopped for food on our way down from Key Largo at a little diner called the Cracked Conch on Marathon Key
(loved the conch fritters), and continued straight down to Key west. By the time we got to the inn, it was probably 8:30 and there were no parking spaces to be found. Jeff circled the block in the car while I ran inside to ask at the reservation desk what we should do. I must have been a sight. Hair stringy and full of dried seawater, no makeup, tired, and frantic. The host at the front desk immediately sized up the situation, and I felt personally took me under his wing. He left the desk and walked me --and so eventually Jeff to a parking spot only a minute away. We ended up leaving the car there the entire two day stay. The hotel had a great location to be able to walk everywhere. 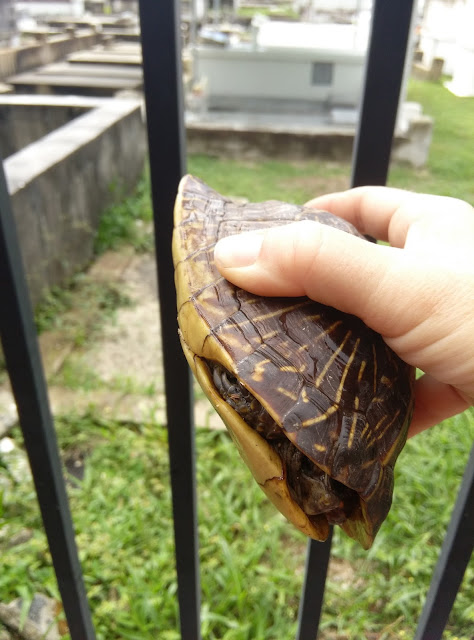 The next morning it was a little drizzly, so we decided to walk to some of the tourist sites on the island instead of starting with the beach. When we walked past a little island cemetery, this dude was just crawling under the fence. So funny! I thought about helping him run away like my mom did with our childhood pet (long story), but we just put him back after taking his picture. 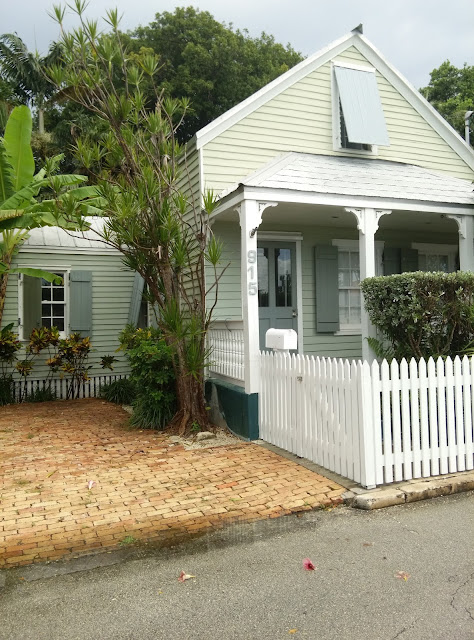 All of the houses we walked by were so dang cute! I felt like I was walking through a Disneyland set. Key West really felt like a fantasy land to me. For this reason I keep thinking back on it fondly, wishing I were back. Jeff didn't like it. He felt like it was too divided between the "haves and have nots". Even the smallest home was drastically overpriced, while lots of people lived on their rundown boats in the harbor as it was all they could afford. I liked thinking of it as Disneyland instead. 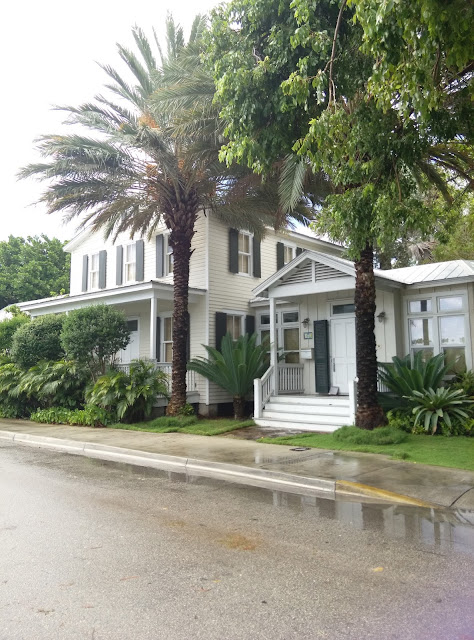 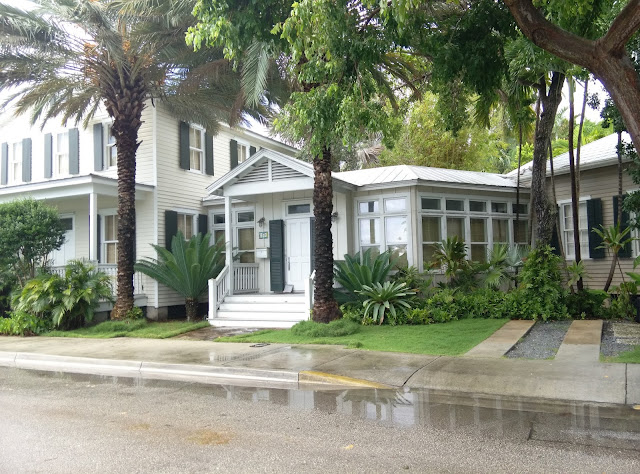 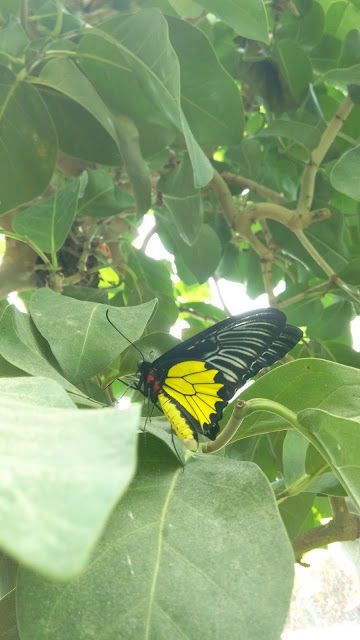 Our fist stop was the Key West Butterfly and Nature Conservancy. By the time we got there we were both soaked through with sweat and rain (but mostly sweat). We hung out for a good fifteen minutes in the gift shop to dry out before daring to enter the steamy butterfly arboretum. 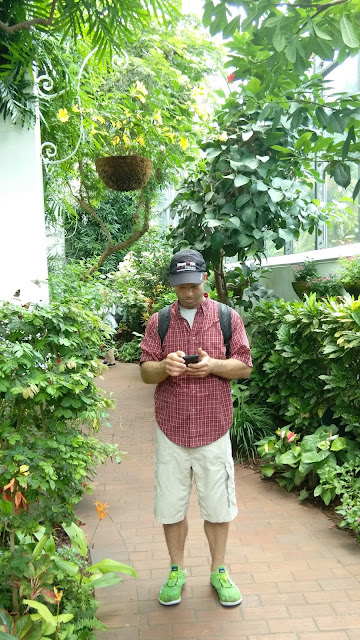 But it was definitely worth the walk. I wish the picture above showed all of the butterflies around Jeff. This was a very well stocked place compared to other places like this I have been to. Along with the butterflies, they kept many small exotic birds. I am guessing they picked birds that don't eat butterflies? The birds were pretty neat too. Lots of tiny fluffball birds that would scurry across the paths and back into the bushes on each side. 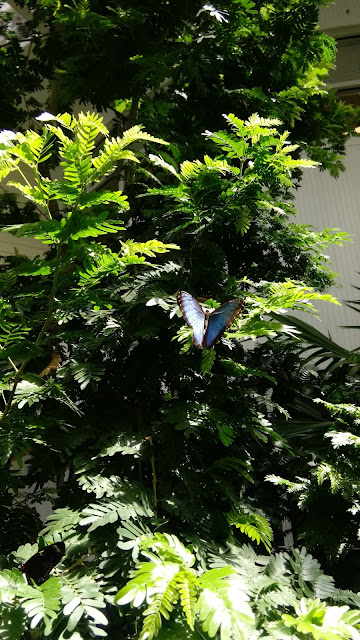 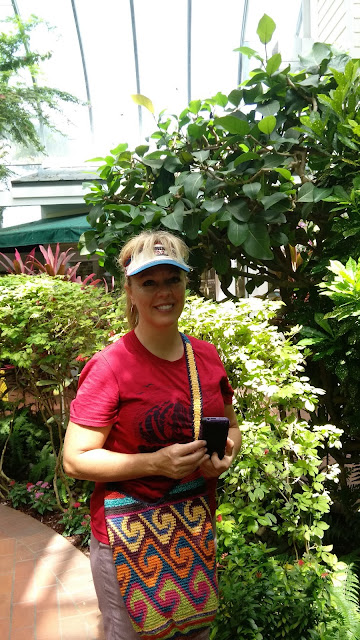 I was literally a hot mess at this point. 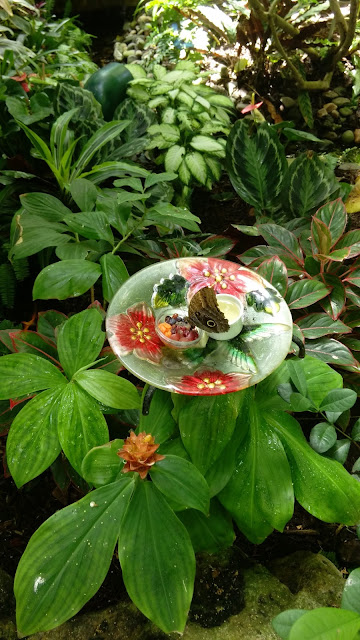 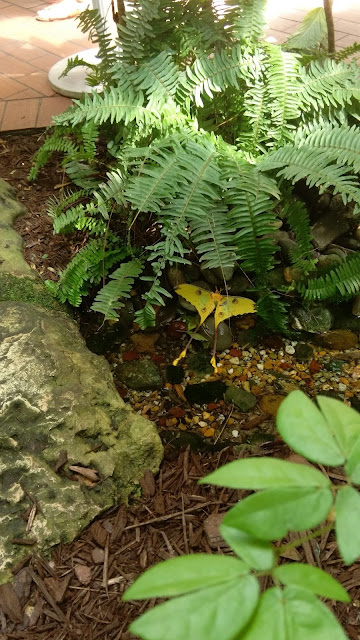 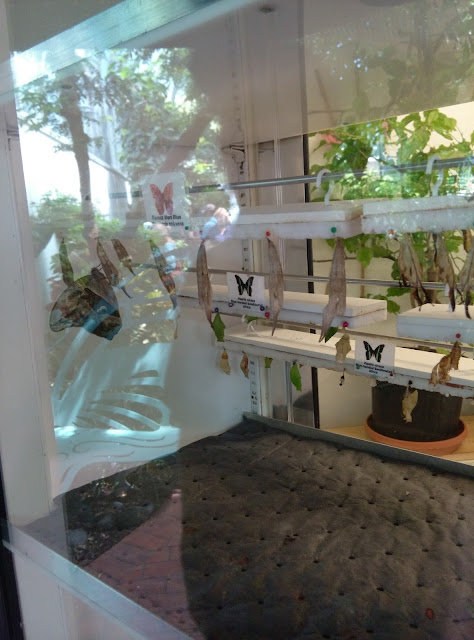 One thing I really enjoyed here was seeing the cocoons! They were in a display type window, and there were even a few butterflies that had just hatched out hanging around. Fascinating. 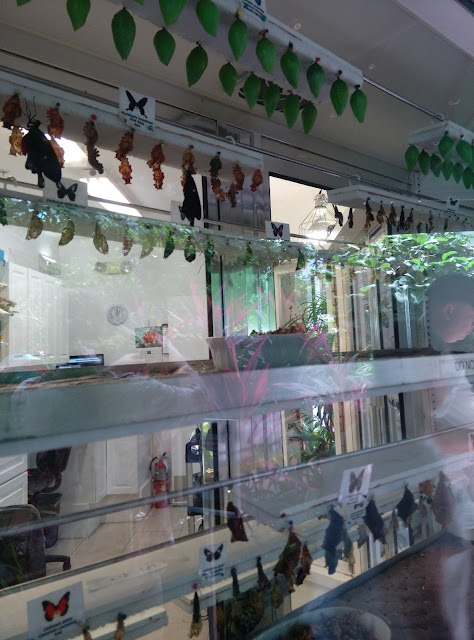 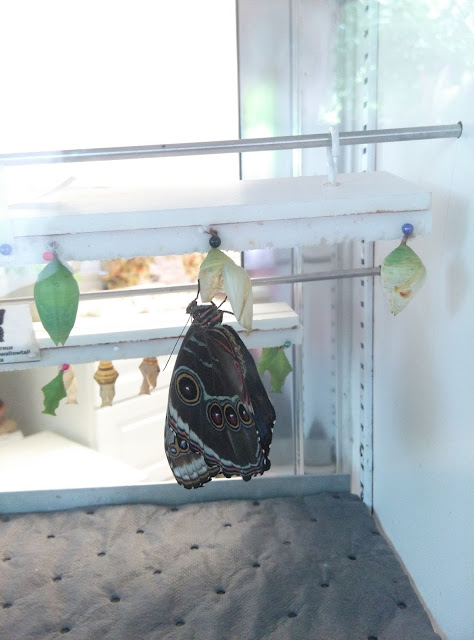 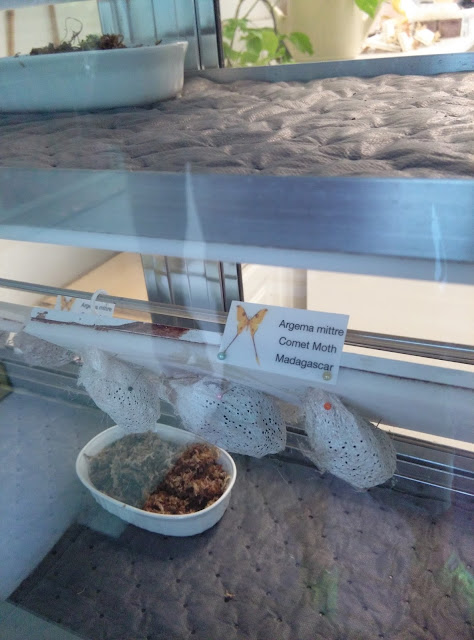 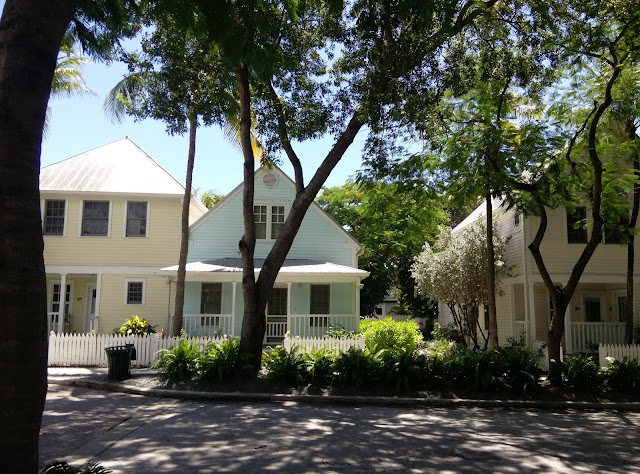 Back to walking through some lovely, perfect streets. 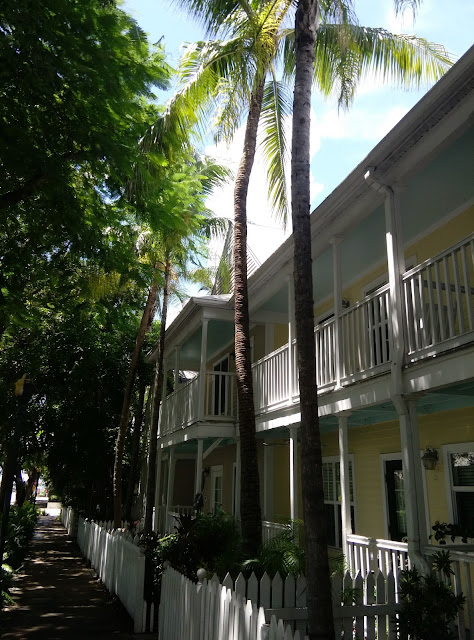 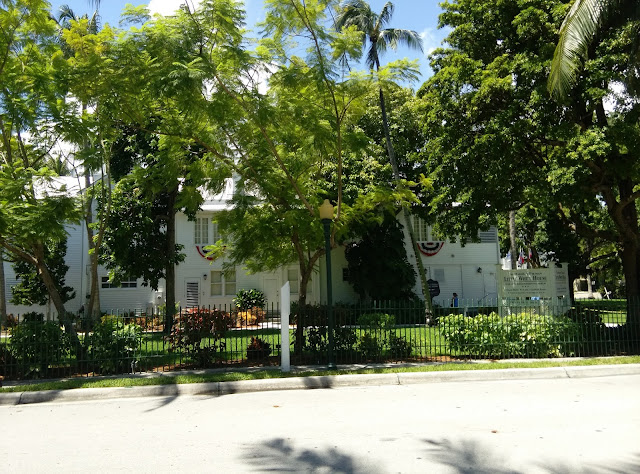 We headed next to the Little White House. This was a residence that President Truman often used, along with a number of other presidents. They used to come and use this place as an escape. We decided we didn't need to take the paid tour, and just looked at the free museum displays on the main floor. I especially liked how when the President and staff would arrive, they all changed into their "Key West Uniform" --loud Hawaiian shirts! 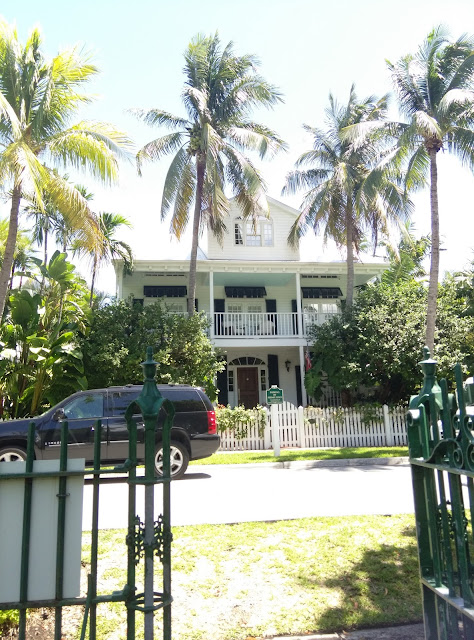 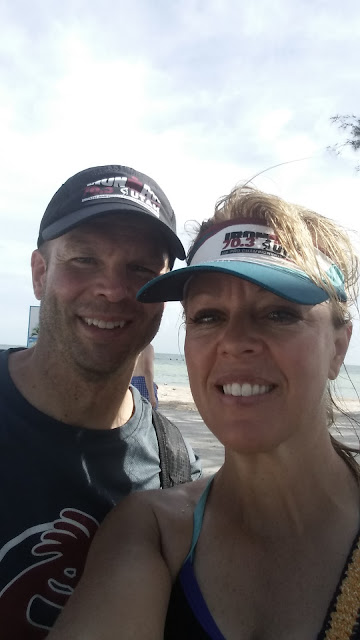 The weather was getting sunnier, so we hurried back to the Heron House to change into our suits, and went to Higgs beach to see what we could see. It was super cloudy near the shore, as there were a lot of people out there stirring up the fine sand, but as we followed the old sea wall out further, we started to see a ton of fish. It wasn't the clearest snorkeling, but still fun.
That afternoon we had to make a decision. Did we want to pay for a tour the next day to see if we could see more? Scuba again? Snokel tour? We decided we had better not try to fit a second Scuba trip into our budget, but thought maybe a snorkel tour was doable. We asked our host to see if he could recommend anything. He took over an hour of his time calling around ( I can't say enough about the great service at Heron House! )  --it was after 8:30 at night --but found us a charter boat that could fit us on the next day. It was a "Dolphin tour", and we weren't super excited about the dolphin part (I grew up where we saw them all the time) but decided to give it a go. 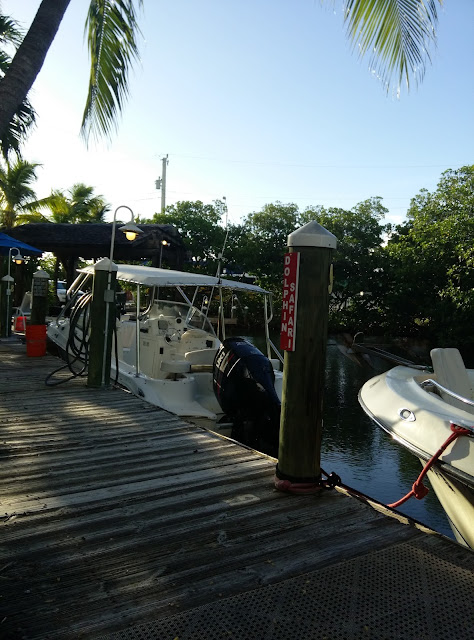 The next day we showed up at the marina on one of the many canals, and found that we were the only ones going! Awesome. Private charter for the price of a group tour. We got comfy in the front of a nice motor boat and headed out. Sitting in the bow, with the wind in my face, and perfect scenery... 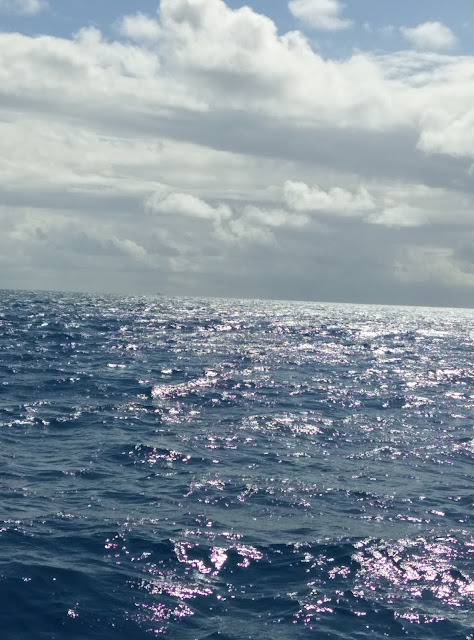 I couldn't' make myself go back and put sunscreen on. I didn't want to move. I ended up with a horrible sunburn on my face. Oh well. 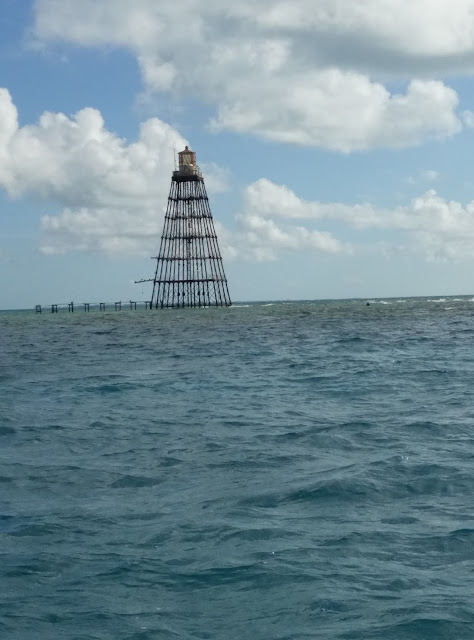 Our sweet boat captain drove around and around looking for dolphins for us, but finally we told her that all we really wanted to do was snorkel. She ran us out to the reef near Sand Key Lighthouse. We were kind of worried that snorkeling would be a huge disappointment after Scuba, but this reef was so near the surface that it was wonderful. We saw huge schools of dark blue fish --blue tangs I think, and a huge spotted eagle ray (like the teacher in Finding Nemo). The coolest thing ever though, was a school of half a dozen dark blue parrotfish. I didn't even know they came in that color. They were huge too. Jeff and I popped up at the same time and said "did you see those guys??!!" Jeff replied "I don't know what I'm going to do with the rest of my life now!" (check out that link it's hilarious). When a bunch of jellyfish started drifting in we called it good for the day and headed back to the boat. 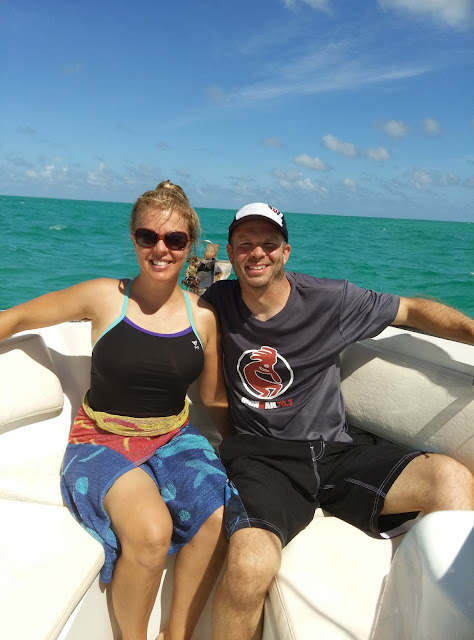 All in all a satisfying time in Key West --oh almost forgot! We ate at Cafe Sole the one night , and it was fantastic. Get the Hog Snapper if you go. 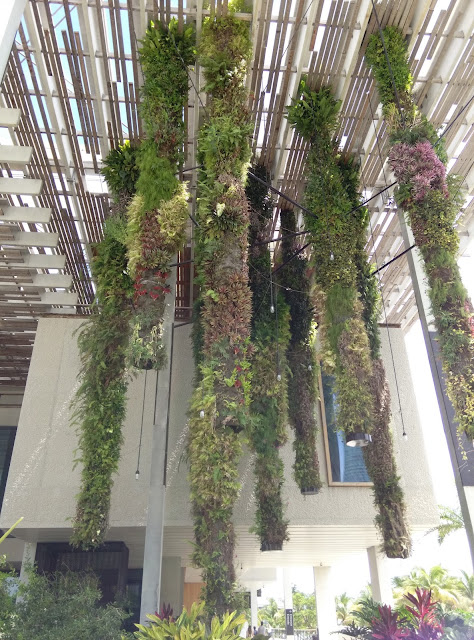 We headed back to Miami, and went to the Museum of Contemporary Art. I am not a huge fan of modern art, but we were desperate for an indoor venue. I did like the hanging planters near the entrance. The rest of the museum was full of stuff we hated. There was a giant mandala shape on the floor of all different colors that looked pretty. Up close I realized it was made of maxi pads. There were tiny gold statue things in lit up boxes set in the walls of a hallway. I peered into the boxes, until I realized it was erotica. Yeah. Just not our thing. BUT! There was one installation I loved. 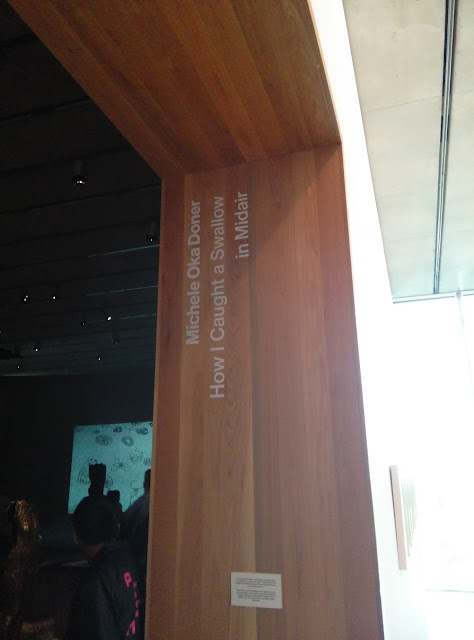 This artist had the whole room for her installation, and filled it with beautiful things. She created a whole world in there. It is hard to describe, and the picture doesn't do it justice. 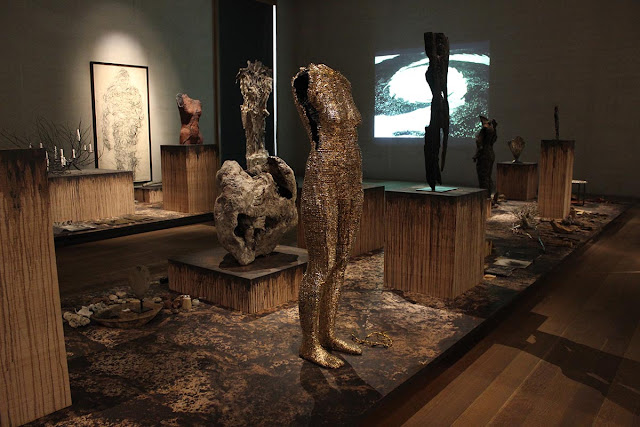 Lots of texture up close, and seed pods and bone fragments and a screen with footage projected onto it. I don't know what all. I loved it. 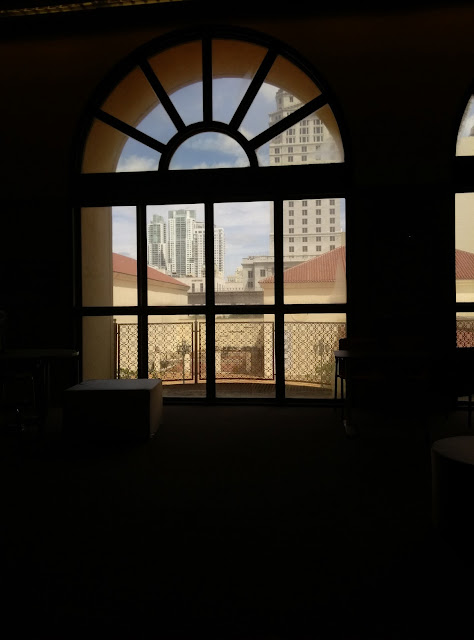 We went to lunch at a dive of a Cuban place that was great food, then we headed to the lovely historic Dade County main library building and relaxed until our flight. I found a nice little book and settled in. In the background downstairs they had invited in a professional opera singer to perform, and her voice floated up the stairs as background music to my reading. I had a hard time tearing myself away to get home.

So glad you got to go!

Everything looks amazing- and warm!! I'm with you, I love wandering picturesque towns full of cute houses.