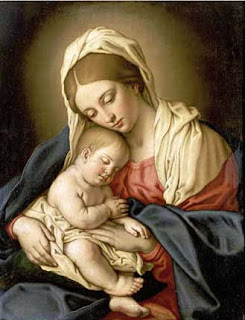 There's a reason why the Madonna and Child is an iconic image, and it's not not just because of who they are.  I watched a mother in front of me today in sacrament meeting with her baby, and they were a single unit.  I realized that this is what they'd be for months until the baby stopped nursing, started to crawl, and eventually, walk.

I watched the rest of the family --a dad and little 2 year old girl, and although the dad took his turn, and the mother sometimes held the little girl on her lap it wasn't the same.  The baby owned that woman and knew it.  This wasn't a sleepy, gentle Messiah-type baby either.  This baby was brash, outgoing, active and wasn't scared of anything or anyone.  I couldn't help thinking that although some of this little person's security came from the heavy duty, waistband type elastic bond between her and her mother, this child came with this Danny Devito style personality.  It was amazing.  She worked the entire row of people sitting behind her --getting a giggle out of each one of my kids, my husband, and me, then started on the family next to us.  She flailed her arms and legs, testing out all of the space around her. She chewed on her Peter Pan board book with slobbery gums, then flapped it open and smacked her forehead on the top of the open page --showing us how she reads.  I reflexively judged this to be a good mother that reads to her baby ( I was crappy at it when my kids were babies --waiting until they understood the language to read to them so I didn't waste my time). After we saw the baby's demo she opened her mouth up wide in a gappy smile, and with her perfectly round head, I couldn't help think of PAC-man and giggled again.

This is lovely. So lovely. I like your brain.

Wonderful writing. Captured so much of the child personality and the moment. Thanks for sharing.

You eloquent lady!! This was a perfect description. Like me screaming at my boys all the way up and down the mountain today to not touch each other and stay close to the mountain away from the edge. That fierce mama love is so so powerful!! They didn't understand the pain it was causing me watching them even 2 feet from the edge. Ouch!! (ok my bum hurt too from the hike!)

Hello! I am so, so, so sorry. You left the nicest comment ever on my blog a million moons ago and I am just now getting over here to thank you. I could tell you all the thousands of reasons I'm so late, but none of them would do, so I'll just say please forgive my rudeness.

And oh, what a lovely post! All of it is so true. In fact, it brought me to tears today when I am in the midst of such things. That baby you described was my middle girl to the T. She walked so early on, I couldn't believe my eyes. In fact, I didn't believe it until she started solidly walking at 8 months. She hasn't stopped since. She has been one of the biggest joys of our lives, but she is now 18 and this is my second-go-round with an 18 year old daughter who is stressed about life and getting into her favorite college. Stress and 18-year-old girls are an awful mixture and usually the parents suffer mightily because of it.

I will remember your post today when I greet her with a giant hug when she walks in the door from school.